Here's a roundup of top stories from the world of politics, sports, and entertainment, which grabbed the spotlight and trended the most on various social media platforms on February 13. 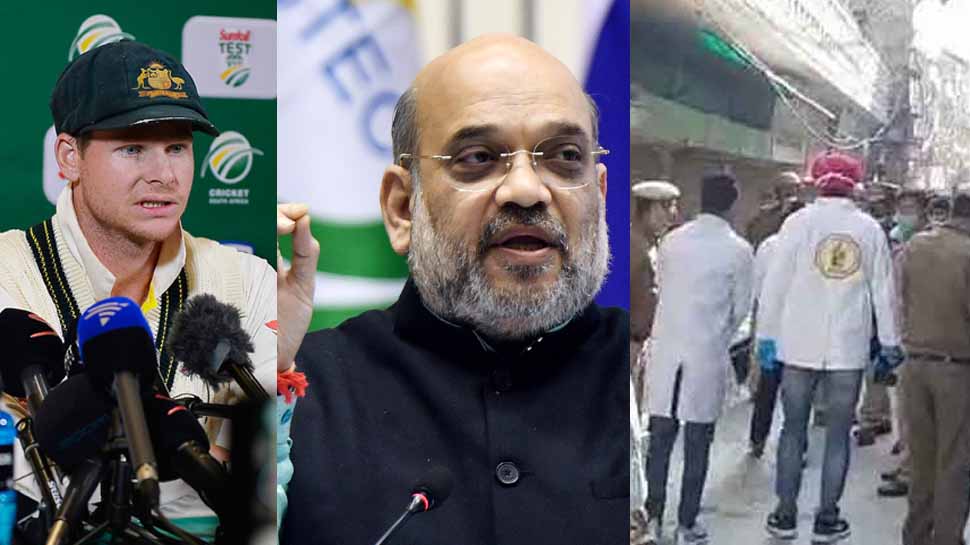 Here's a roundup of top stories from the world of politics, sports, and entertainment, which grabbed the spotlight and trended the most on various social media platforms on February 13.

Union Home Minister Amit Shah on Thursday said hate speeches like 'goli maro' and 'Indo-Pak match' may have resulted in the defeat of the Bharatiya Janata Party (BJP) in the Delhi Assembly election, adding that such remarks should not have been made by BJP leaders during the recent campaigning. He added that the party had distanced itself from such remarks, he told a news channel. (READ FULL STORY HERE)

The horrific murders of five members of a family in Northeast Delhi's Bhajanpura was allegedly carried out by the maternal uncle of the head of the family, Shambhu Chaudhary. Police arrested Shambhu's maternal uncle Prabhu Mishra on Thursday for the crime. (READ FULL STORY HERE)

Ministry of External Affairs (MEA) on Thursday (February 13) decided to rename Pravasi Bhartiya Kendra, Delhi as Sushma Swaraj Bhawan & Foreign Service Institute, Delhi as Sushma Swaraj Institute of Foreign Service. The announcement is being made on the eve of her birth anniversary falling on 14th February in honour of the legacy and decades of public service of the former External Affairs Minister Sushma Swaraj to pay tribute to her invaluable contribution. (READ FULL STORY HERE)

Indian Air Force (IAF) is looking for 114 combat aircraft to bolster its fighter stream and eyeing top jets from the United States of America, Europe and Russia for the same. Major defence companies have responded to the multi-billion dollar deal and USA's Boeing, which has already put its F/A-18 Super Hornet in the race, may also offer its twin-engine, twin seater F-15EX fighters to the IAF. (READ FULL STORY HERE)

A lawyer was attacked by some unidentified men inside the court complex in broad daylight in Uttar Pradesh capital Lucknow. According to information available, the lawyer was attacked with crude bombs, however, he escaped unhurt. The attackers threw two crude bombs on lawyer Sanjeev Lodhi, one of which exploded near him while the other failed to explode. (READ FULL STORY HERE)

In a major success for Delhi Police, bookie Sanjeev Chawla, one of the main accused in the 2000 cricket match-fixing scandal, has been extradited to India from London, United Kingdom. Chawla was escorted by Delhi Police officers from London to New Delhi on Thursday (February 13). The 2020 match-fixing scandal involved several big cricketers, including then South Africa captain Hansie Cronje, Mohammad Azharuddin, Ajay Jadeja and Manoj Prabhakar. (READ FULL STORY HERE)

Feria Internacional del Libro (FIL) is the second-largest literature festival in the world; it is held every year in Guadalajara with a footfall of over 1 million people. Last year, for the first time ever, India was chosen as the guest of honour country at FIL. (READ FULL STORY HERE)

9) This Valentine's Day, Zee English cluster celebrates love in all its hues with three special binges!

To love is to live! Nothing compares to the warm and fuzzy feeling you experience when you share a moment with your loved one. Be it an infant with the mother, a dog with his master or even a friend from miles away – love truly comes in all shapes and sizes. (READ FULL STORY HERE)

Former Australian skipper Ricky Ponting believes the Steve Smith-led side did not have enough experienced players to say "no" and as a result, they were involved in the infamous Cape Town ball-tampering scandal which took place in 2018. (READ FULL STORY HERE)