Maharashtra Chief Minister Uddhav Thackeray welcomed Prime Minister Narendra Modi in Pune on Friday night as the latter arrived in the city for a three-day national conference of Directors General and Inspectors General of police being held at the Indian Institute of Science Education & Research. 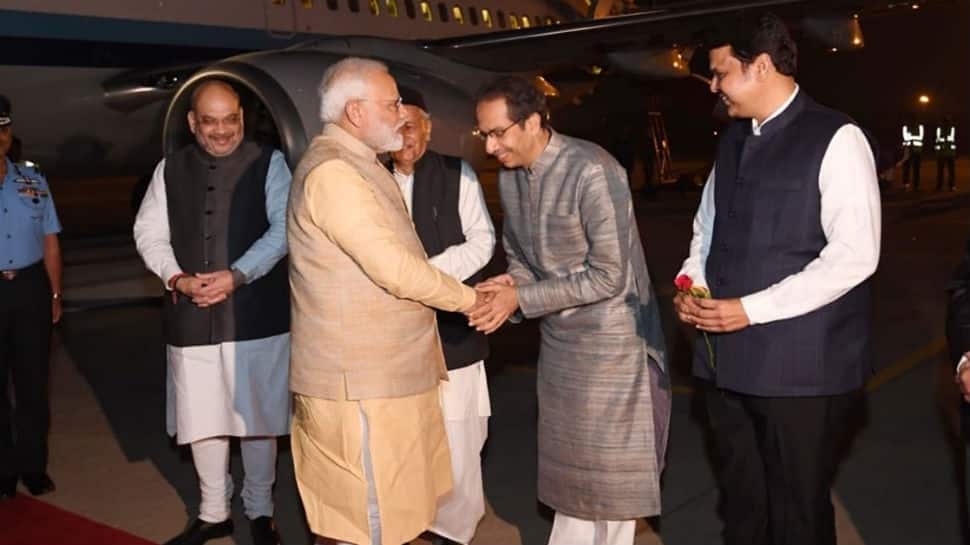 New Delhi: In a keenly-watched development, Maharashtra Chief Minister Uddhav Thackeray welcomed Prime Minister Narendra Modi in Pune on Friday night as the latter arrived in the city for a three-day national conference of Directors General and Inspectors General of police being held at the Indian Institute of Science Education & Research (IISER).

This was their first meeting between the two political stalwarts after the Bharatiya Janata Party (BJP) and the Shiv Sena snapped their decades-old ties after differences over power-sharing ahead of forming government in Maharashtra after October election.

As PM Modi alighted from the aircraft, he was welcomed by Union Home Minister Amit Shah, Maharashtra Governor Bhagat Singh Koshyari, Uddhav Thackeray and the Leader of Opposition Devendra Fadnavis.

The Prime Minister landed in Pune. He will take part in the DGP and IGP Conference in the city.

Thackeray especially went from Mumbai to Pune to receive and welcome PM Modi as a state protocol gesture, and the two were together for barely a few minutes. Modi shook hands warmly with Thackeray who bowed and welcomed him.

Over a week after Uddhav took over as the Chief Minister, he has not yet formally met the Prime Minister, though a meeting is likely to be announced shortly.

Maharashtra was reeling under severe political crisis even a month after the election results were announced. The state was placed under President's Rule after the major parties failed to form a government. However, on November 23, BJP's Devendra Fadnavis took oath as the CM after he was supported by NCP leader Ajit Pawar, giving a major setback to party chief Sharad Pawar and the Maha Vikas Aghadi. Their alliance was almost finalised when Fadnavis took over for the second consecutive term.

Several meetings, discussions were held with the parties and negotiation talks with Ajit Pawar also took place. Two days later, he resigned from the deputy CM post, following which Fadnavis too decided to quit.

Later, the Maha Vikas Aghadi chose Uddhav as their leader and decided to give him the top post. He took oath in a grand ceremony in Mumbai on November 28 and their alliance won the trust vote too.

PM Modi was among the first to congratulate Uddhav for becoming the CM and the Shiv Sena chief had reciprocated promptly.

"Congratulations to Uddhav Thackeray-ji on taking oath as the CM of Maharashtra. I am confident that he will work diligently for the bright future of Maharashtra," PM Modi had said in a tweet.

Uddhav, in his reply, said, "Thank you Hon`ble Prime Minister Shri Narendra Modiji for your kind wishes. With you as my big brother in the Centre and with a strong cabinet in the state, I am looking forward to working persistently, to build a new Maharashtra."

The Ministry of Home Affairs has organised the annual national conference of DGPs-IGPs. Earlier it was held in New Delhi, but since the past few years, it is being held in different cities around the country.