Under India's Presidency, UNSC to discuss Afghanistan situation on Friday

Under India's presidency the UNSC will discuss Afghanistan on Friday, the annoucement was made by TS Tirumurti, president of the council. 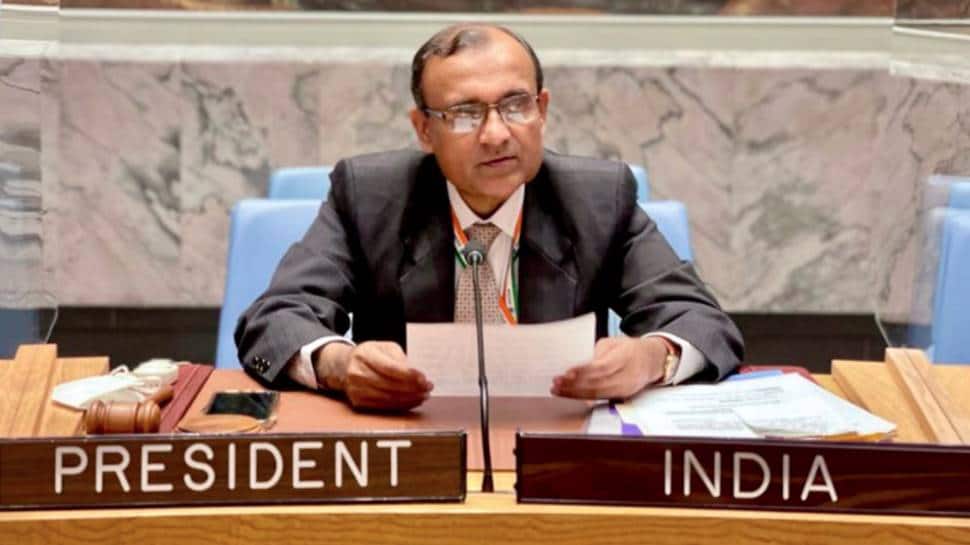 New Delhi: United Nations Security Council discuss Afghanistan on Friday (August 6, 2021) under the Indian Presidency of the United Nations body. India is the president of the council for the month of August and coordinates and decides the agenda.

The announcement was made by the Indian envoy to the United Nations TS Tirumurti, who is also the president of the council. Taking to Twitter he said, "UN Security Council will meet on Friday, August 6 under Indian Presidency to discuss and take stock of the situation in Afghanistan."

UN #SecurityCouncil will meet on Friday, 6th August, under Indian Presidency to discuss and take stock of the situation in #Afghanistan pic.twitter.com/baLLXC5Zor

The development comes within 48 hours of the Afghan Foreign Minister requesting the Indian External affairs minister to hold a special of the council on the situation in Afghanistan. On Tuesday, Afghanistan's Haneef Atmar called Dr S Jaishankar and an Afghan foreign ministry release said, "...Talked about the escalation of violence, widespread human rights violations by the Taliban and foreign terrorist groups operations in Afghanistan, and the need to hold a special session of the UN Security Council on Afghanistan."

The development has been welcomed by Afghanistan govt with Afghan envoy Farid Mamundzay in a tweet saying, "Thank You India for the lead role as UNSC President".

Convening an emergency UN Security Council Session on Afghanistan is a positive development. UN & international community must play a greater role to stop the unfolding tragedy in due to violence & atrocities by terrorists. Thank you India for the lead role as UNSC President. https://t.co/3s6cBFY8vB

The meet will be a briefing so it will be open for the public to see. The meet comes ahead of Troika plus meet on Afghanistan which includes the US, Russia, China, and Pakistan. A routine meeting of the United Nations Assistance Mission in Afghanistan UNAMA will take place next month.

Earlier, under India's Presidency, the UNSC had issued a press statement condemning the attack in the United Nations compound in Herat on July 30 that killed an Afghan security forces guard.

In a strongly worded release, the statement said, "Members of the security council expressed their deep concern about the high levels of violence in Afghanistan following the Taliban's military offensive and called for an immediate reduction of violence"

On Monday UNSC President, Indian envoy to UN T S Tirumurti said, "The situation in Afghanistan is of deep concern to all members of the security council. We have seen in recent days, violence is only increasing..and targetted killing has increased".

He made the comments at the customary presser by UNSC President on the first working day of the council.

He said, "India has supported every opportunity that can bring peace, security, and stability in Afghanistan. We should address the question of violence and the targetted attacks".

Taliban has increased offensive in many parts of the country including Herat, Kandahar, and Helmand.

In a recent briefing to foreign envoys based in Kabul, he highlighted how the Taliban is being supported by international terror groups including Pakistan-based anti-India Lashkar-e-Taiba (LeT).

Indian envoy Rudrendra Tandon was also present at the meet. A UN report has said that the number of casualties from May to June exceeds the number between January and April. Recently UN--United Nations Assistance Mission in Afghanistan compound in Herat came under attack, something that was condemned by the International community.