Harsh Vardhan hit out at Maharashtra and said that the 'lackadaisical attitude' of the state government has 'singularly bogged down' the entire country's efforts to fight the virus. 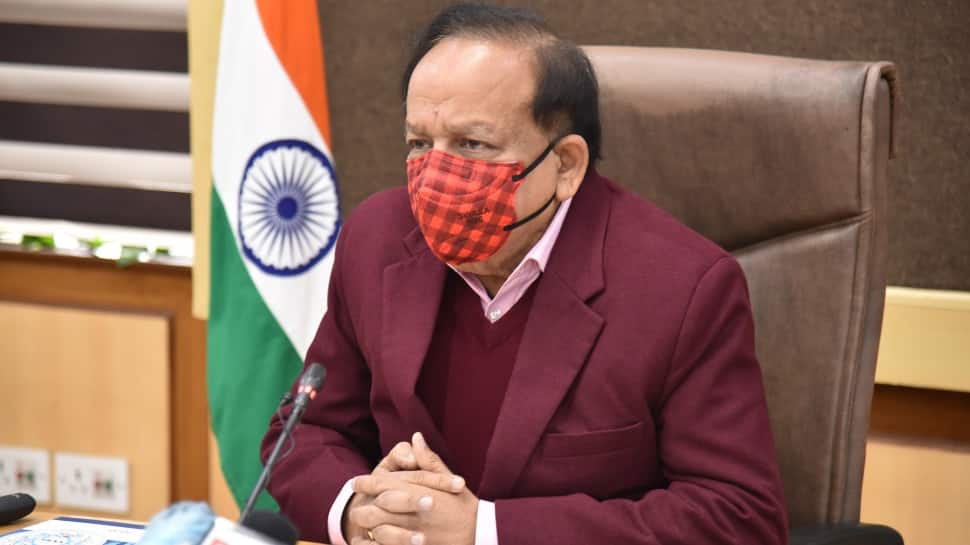 New Delhi: Amid allegations over the shortage of COVID-19 vaccines, Union Health Minister Harsh Vardhan has hit out at 'some state governments' for their deplorable attempts to distract attention from their failures.

In an official statement, Harsh Vardhan said that at a time when the country is witnessing a fresh wave of rising COVID-19 infections, he is alarmed to note the fact that many 'State governments have failed to take appropriate response measures'  and apply the lessons that the nation has learned over the past one year of handling this pandemic.

He said that politicising the important public health issue of COVID-19 and spreading panic regarding vaccine supply is a damning indictment of certain leaders and their own fallacies.

Harsh Vardhan stated, "In particular, I have seen statements made by public representatives in Maharashtra about shortage of vaccines. This is nothing but an attempt to divert attention from Maharashtra government's repeated failures to control the spread of pandemic. The inability of Maharashtra government to act responsibly is beyond comprehension."

Coronavirus vaccine supplies are being monitored on a real-time basis

The Union Health Minister informed that the coronavirus vaccine supplies are being monitored on a real-time basis, and State governments are being apprised regularly about it.  "Allegations of vaccine shortage are utterly baseless," he said.

"The lackadaisical attitude of the state government has singularly bogged down the entire country’s efforts to fight the virus," Harsh Vardhan added.

He also attacked the Chhattisgarh government and said that it would be better if the state government focusses its energies on ramping up their health infrastructure rather than on petty politicking.

He added, "The state Government in fact refused to use Covaxin despite it being given Emergency Use Authorization (EUA) by the Drug Controller of India. Not only this, by its actions, the leaders of the state government have the dubious distinction of being perhaps the only government in the world to have incited vaccine hesitancy."

The Union Health Minister said that many other states also need to bring their healthcare systems up to the mark. "For example, quality of testing needs to improve in Karnataka, Rajasthan and Gujarat. In Punjab, high Case Fatality Rate needs to be improved by early identification of those needing hospitalization," Harsh Vardhan highlighted.

He added that mask-wearing and social distancing compliance are slack in a large number of States and that there is a lot that needs to be done, and 'we must do it all with speed and at scale'.

Open up COVID-19 vaccination to everyone above the age of 18?

Harsh Vardhan also talked about statements being made by a 'section of political leaders' asking to open up vaccination to everyone above the age of 18 or to drastically lower the minimum age criteria for vaccination eligibility.

He replied by saying, "The Government of India has been frequently and transparently updating all the State governments about the demand-supply dynamics and the resultant vaccination strategy that has been adopted. In fact, the vaccination strategy has been drawn up after extensive deliberations and consultations in partnership with all State governments. The same has also been a matter of public record for several months now."

"Nonetheless, it bears repeating that the primary aim of vaccination is to reduce mortality among the most vulnerable people, and enable the society to beat the pandemic," he added/

He noted that as long as the supply of COVID-19 vaccines remains limited, there is no option but to prioritize. "This is also the established practice around the world, and is well known to all State governments," he said.