The BJP chief said that the party is confident of winning more than 21 seats in the northeast, as reported by news agency ANI. 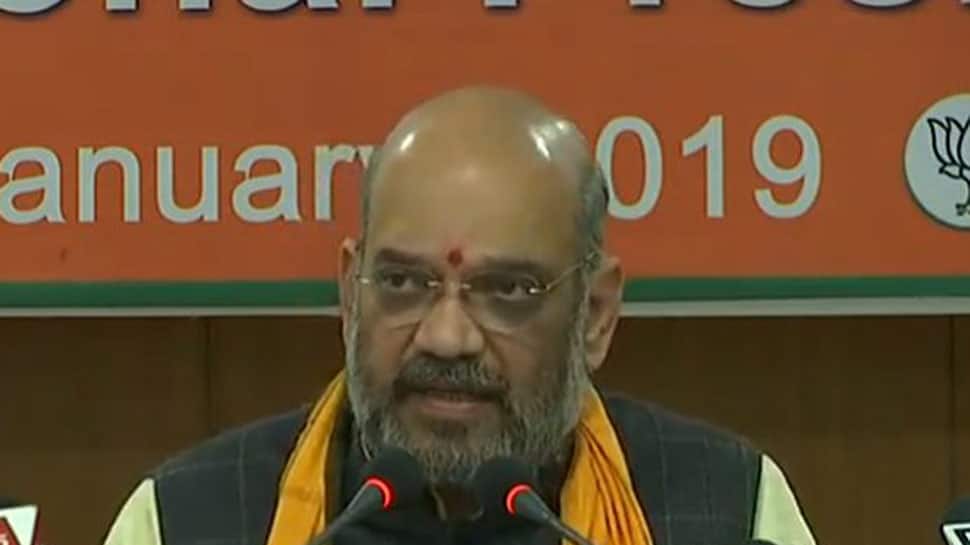 BJP president Amit Shah on Saturday launched a scathing attack on the Congress saying that in the northeast, all eight governments have "gone out of Congress’ hands and are now with the NDA" and there is a wave in favour of Prime Minister Narendra Modi.

Addressing the people of Agartala in Tripura, the BJP chief said that the party is confident of winning more than 21 seats in the northeast, as reported by news agency ANI.

"In North-East, all 8 governments have gone out of Congress’ hands and are now with the NDA. We’re confident of winning more than 21 seats in North-East. There is a wave in favour of Narendra Modi ji in this region."

"For years the demand to rename the Tripura Airport after the king of Tripura was not accepted. When we formed the government, we renamed the airport after him and honored the king," said Shah.

Taking a jibe at the West Bengal government, Shah said, "In West Bengal, BJP will win more than 23 seats in the Lok Sabha elections. A change is about to happen in Bengal, the people are fed up of the alliance of Congress and Trinamool Congress (TMC)."

The BJP chief said that the party would fight the coming general election on the issues like development, defence and self-respect of the country. He expressed confidence that Prime Minister Narendra Modi would come back to power with the BJP winning more than 300 seats.

The saffron party had won 282 seats in the 2014 poll, more than the magic number required for forming a government. "Development, defence and self-respect of the country are the main issues in the next general elections with which the BJP will go into the poll. Prime Minister Narendra Modi would come back to power by winning more than 300 seats", Shah told a press conference

When asked about building of Ram temple at Ayodhya, he said, So far the issue of Ram Mandir is concerned, Congress does not want the case is settled fast. According to the announcement of the BJP, we want Ram Mandir is built, but remaining within the structure of law. He said, there would be drastic changes in the poll scenario in the West Bengal where BJP would win more than 23 seats out of a total of 42 seats. He also claimed that his party would also win 21 seats out of 25 in the northeastern region of the country.

Coming down heavily on efforts of the anti-BJP parties to come together, Shah said, the mahagatbandhan of Congress can give a helpless (Majbur) government and BJP can give a strong (Majbut) government under the leadership of Modiji.

The Modi government has conducted huge developmental works throughout the country, but what is remarkable is strengthening the security and defence of the country, he said. Shah said, when enemies attack soldiers of America or Israel, they immediately retaliate. After the two countries, India is now the third country in the world which also retaliates after formation of the BJP government in 2014.

The BJP chief also claimed that Prime Minister Modi has set a precedent of a strong India by holding surgical strike inside Pakistan after terrorist attacks on Indian Army base at Uri in Jammu and Kashmir in 2016.

Earlier, Shah kicked off election campaign at the Swami Vivekananda Maidan here by addressing 50,000 Panna Promukhs and other party workers.
During his address, Amit Shah Saturday appealed people of Tripura to ensure victory with huge margin in two Lok Sabha seats from the state.

Prime Minister Modi works 18 hours a day. He comes from a poor family and works tirelessly for the country. After five years in the office of PM, nobody can raise a single allegation against him. Only he can lead a majboot sarkar (strong government), Shah said. He launched a scathing attack against the Congress-led alliance saying they have neither policy, nor leader or any sort of promise.

What is the neeti (policy) of this alliance? Who is its 'neta (leader)? Who will run their government? So, build close coordination with every single person in the state and make sure that both Lok Sabha seats from Tripura are gifted to Narendra Modiji in 2019, he said. Among others, BJP General Secretary, Ram Madhab, and state In-charge Sunil Deodhar and Chief Minister Biplab Kumar also spoke in the meeting.