Zee News has launched a public awareness campaign to increase awareness on the Citizenship Amendment Act (CAA) to bust myths and misinformation surrounding new law, which has led to violent protests nationwide. 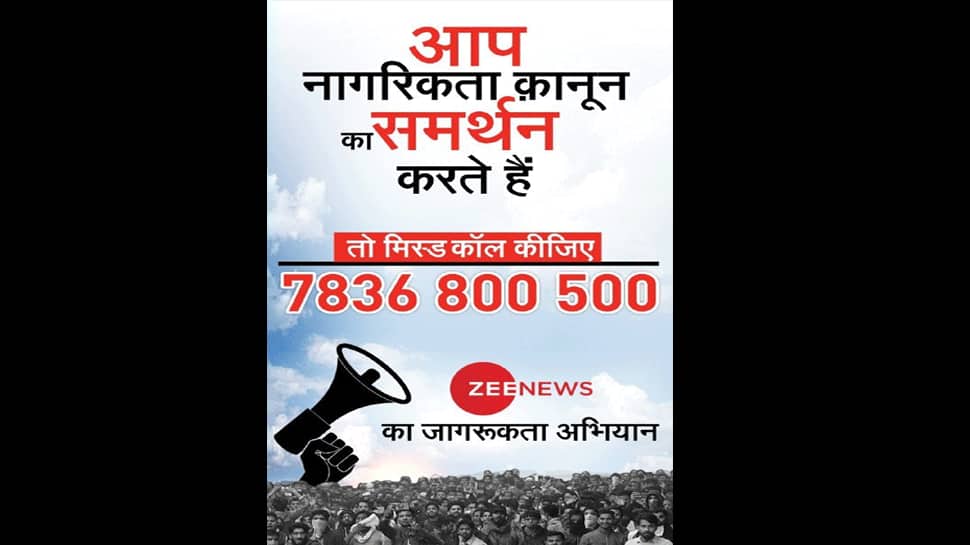 Zee News has launched a public awareness campaign to increase awareness on the Citizenship Amendment Act (CAA) to bust myths and misinformation surrounding the new law, which has led to violent protests nationwide.

In the campaign, Zee News is seeking the support of the people via a missed call. If you support the Citizenship Amendment Act, just give a missed call on toll-free number 7836800500 and register your support.

The campaign, which was launched on Saturday, has received a thunderous response which the phone line ringing constantly. People have come out in large numbers to pledge their support to the Citizenship Amendment Act.

Massive and violent protests against the Citizenship Amendment Act (CAA) have gripped the nation with the situation escalating in several places including Delhi, Maharashtra, West Bengal, Bihar, and Northeastern states.

Amid the protests over the Act, here are a few detailed questions and answers clearing the myths around the CAA.

Amid the raging protests against the Citizenship Amendment Act (ACC) in Delhi and other parts of the country, the ruling Bharatiya Janata Party (BJP) on Saturday announced a communication campaign to counter misinformation spread by Congress and other opposition parties over the new law leading to violent protests.