India must hold talks with Pakistan to end bloodshed in J&K: Mehbooba Mufti

PDP chief Mehbooba Mufti on Monday called for holding talks with Pakistan to end the bloodshed in the militancy-hit J&K. 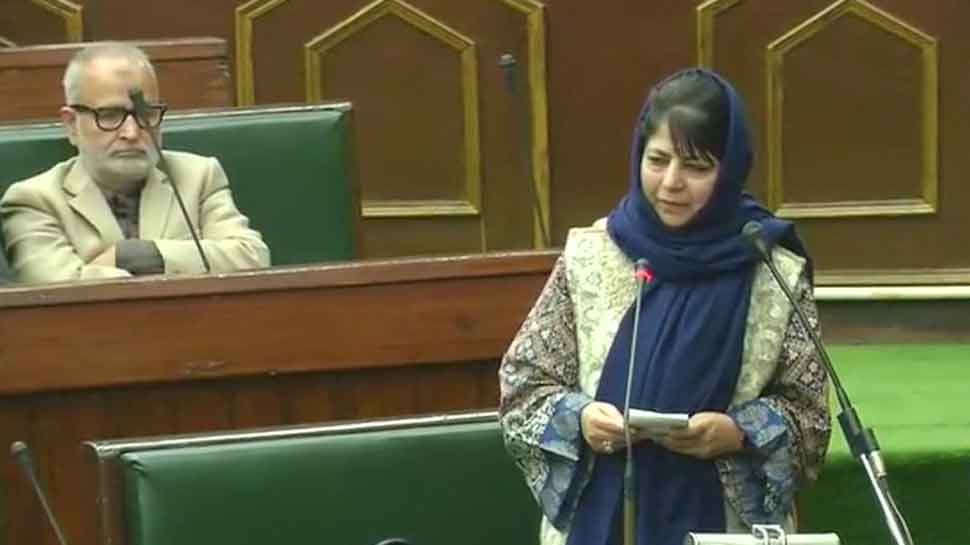 Srinagar: Jammu and Kashmir Chief Minister Mehbooba Mufti on Monday called for holding talks with Pakistan to end the bloodshed in the militancy-hit state.

"Dialogue with Pakistan is necessary if we are to end bloodshed (in the state)," Mehbooba Mufti said in the Jammu and Kashmir Assembly.

We fought and won all wars against Pakistan but even now today there is no solution other than dialogue, till when will our jawans and civilians keep dying. Wonder what some media houses would have called Atalji if he took bus to Lahore in today's time&talked of dialogue: J&K CM pic.twitter.com/gUjWhKvEXH

However, the PDP leader was quick to add that she will be dubbed "anti-national" by TV channels for making such an appeal.

"I know I will be labelled anti-national by news anchors tonight but that doesn`t matter. The people of Jammu and Kashmir are suffering. We have to talk because war is not an option," the J&K CM said.

Unfortunately, some media houses have created an atmosphere that if we talk of dialogue (with Pakistan) then we are labelled anti-national: J&K CM Mehbooba Mufti in state assembly pic.twitter.com/i9paKyzeXF

The appeal from the J&K CM comes amid a spurt in terror attacks across the state as well as unending border clashes between Indian and Pakistani militaries.

Meanwhile, in a related development, the Supreme Court today said that no coercive action will be taken against Major Aditya Kumar, accused of allegedly killing three civilians in firing to disperse a stone-pelting mob in Shopian district of Kashmir.

Jammu and Kashmir Police had earlier registered an FIR against Major Aditya Kumar.

The apex court ruling is a setback to J&K CM since the FIR against Army officer was registered at her orders.

Directing that no coercive action would be taken against the Army Major in pursuance to the FIR, a bench of Chief Justice Dipak Misra, Justice AM Khanwilkar and Justice DY Chandrachud sought the response from the Centre and the Mehbooba Mufti government in the state.

The father of the accused Major, Lt. Col. Karamveer Singh, had filed a petition in the apex court seeking quashing of the FIR.

The father contended that registration of FIR and the consequent proceedings would adversely impact the morale of the armed forces fighting militancy in the trouble-torn state.

The court asked for a copy of the petition to be served on the office of the Attorney General KK Venugopal.

Senior counsel Mukul Rohatgi, who appeared for the petitioner, urged the court to stay the FIR.

Major Aditya Kumar and other soldiers of the 10 Garhwal Rifles were accused of opening fire on a stone-pelting mob which had attacked an administrative army convoy near Ganowpora village in Shopian district on January 27.

The firing resulted in the death of three persons.

"The manner in which the lodging of the FIR has been portrayed and projected by the political leadership and administrative higher-ups of the state reflects the extremely hostile atmosphere in the state," the petition said.

It said that Major Aditya Kumar was wrongly and arbitrarily named as the incident relates to an Army convoy on bonafide military duty in an area under AFSPA (Armed Forces Special Powers Act), which was isolated by an "unruly and deranged" stone-pelting mob.

The intention of the Major was to save Army personnel and property, and the fire was inflicted only to impair and provide a safe escape.

"The unruly mob was requested to disperse and not to obstruct military persons in the performance of their duties and not to damage government property..."

The unruly behaviour of the unlawful assembly reached its peak when they got hold of a Junior Commissioned Officer and was in the process of lynching him.

"It was at this moment that warning shots were fired... which as per the said terms of engagement is the last resort to be taken...," the plea said.

It also sought directions to issue guidelines to protect the rights of soldiers and adequate compensation.