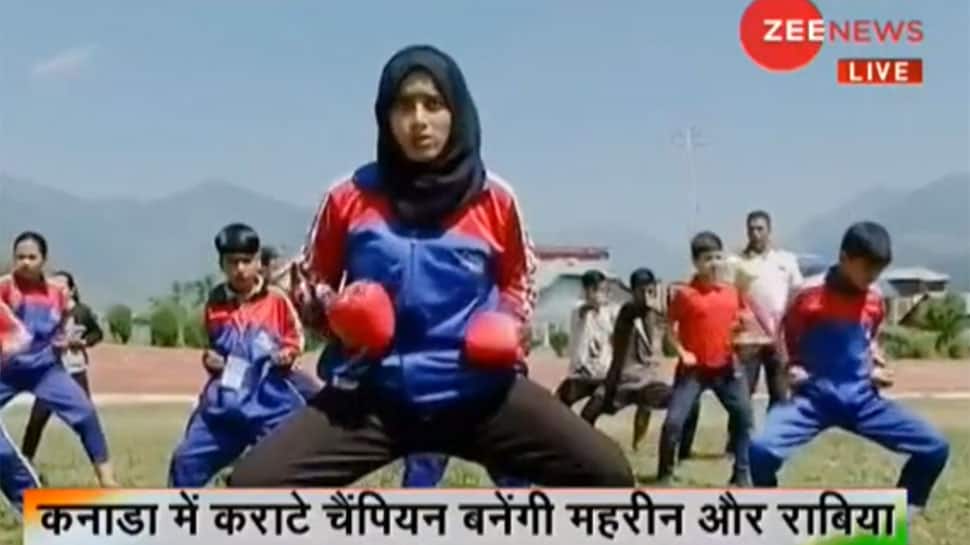 JAMMU: Two young girls from terrorism-hit Jammu and Kashmir will represent India at the 20th Sato Cup International Karate Championship which is scheduled to be held in Canada's Vancouver in November this year.

According to reports, Mehreen Mehraj and Rabiya Riaz – the two girls from Jammu and Kashmir's Bandipora district - have been selected in the Indian Karate team, which will participate in the 20th Sato Cup International Karate Championship in Vancouver beginning November 16. Participants from 25 nations will take part in the championship.

Out of the two Kashmiri girls - Mehreen is just 7 years old. Talking to Zee News, Mahreen said that she wants to represent India in an international championship.

The 7-year-old said that she is working extremely hard to win a Gold medal for the country in her category. When asked how she was preparing for the upcoming Karate championship in Canada,  Mehreen said that she was practicing for no less than five hours daily.

Mehreen added that she wants to represent India in the Olympics one day.

The other girl – Rabia Riaz is 21-years-old. Rabiya's dedication to the sport and her accomplishments have made her a perfect role model for the Kashmiri youths. Like Mehreen, Rabia too wants to win a Gold medal for her country in Canada.

While talking to Zee News, Rabia said that she has been learning Karate since her childhood. Talking about the hardship which an ordinary Kashmiri family faces due to the volatile situation in Jammu and Kashmir, Rabia said that playing a sport remains a distant dream for girls here.

Rabia, who is a BA second-year student, said that she is determined to win a medal in the upcoming Karate championship in Canada and make her country proud.

She also made an emotional appeal to the Kashmiri girls to come forward and realise their dreams of playing for India.

When asked about her fascination for Karate, Rabia said that she first learned Karate for self-defence but later took it as a career option.

During her conversation with Zee News, Rabiya urged Prime Minister Narendra Modi to encourage sports in her state. She also promised the PM that she will try hard to win a Gold medal for the country.

Their coach, Faizal, said that Mehreen and Rabiya's selection in the Indian Karate team has made the entire state proud of them. Exuding confidence, Faizal said that the daughters of Kashmir are unstoppable now and will bring laurels for the country in their respective professions.

Faizal also called for formulating an effective sports policy and sought financial help from the government for encouraging potential sports stars from Jammu and Kashmir like Mehreen and Rabiya.

Sheikh Adnan, another sportsman from the Bandipora, can be spotted imparting training to kids here while donning Team India's jersey – a sign that Kashmir is changing.