A 15-member delegation of J&K National Conference met party president Farooq Abdullah at his residence on Sunday, a day after obtaining permission from Jammu and Kashmir Governor Satya Pal Malik. 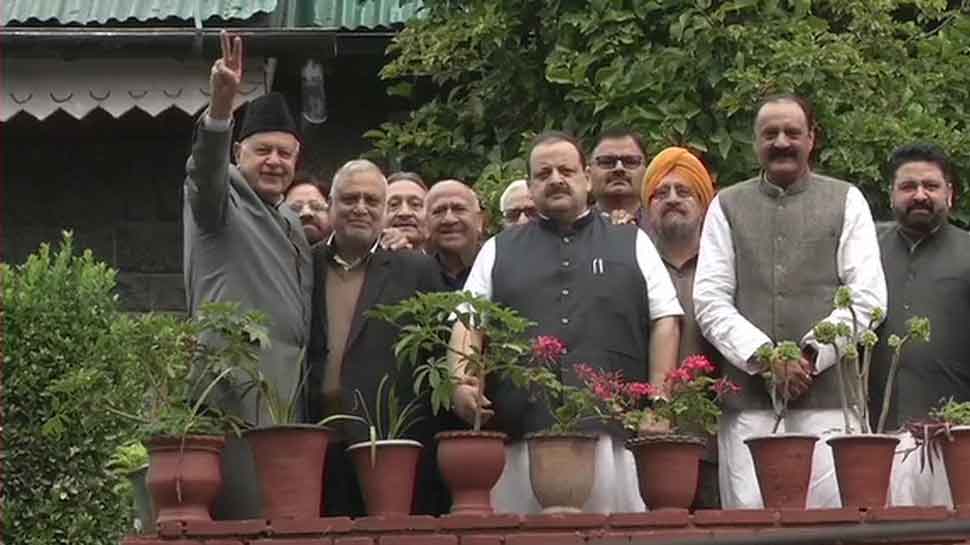 News agency ANI shared a video of NC leaders Hasnain Masoodi and Akbar Lone meeting Farooq and his wife Molly at their residence in Srinagar.

Farooq Abdullah has been placed under arrest under the Public Safety Act (PSA).

Rana had sought permission from Governor Malik in this regard.

Though, the delegation officially maintains, the point of discussion will be restricted to the prevailing situation in Kashmir after the abrogation of Article 370 of the Constitution on August 5, it's widely believed that the upcoming block development council (BDC) election will be the focus.

The NC leaders had expressed anguish over the continued detention of senior party leaders, including Farooq and Omar, as also other top leaders of mainstream political parties of the state, ever since the Centre scrapped special status of the state under Article 370.

Party spokesperson Madan Mantoo said that the NC members decided to meet the top leadership at an emergent meeting two days ago, soon after the administration lifted the movement of party leaders.

The Centre has, however, said that those under house arrest will be released soon.

After the Central government decided to revoke the special constitutional status accorded to Jammu and Kashmir (J&K) under Article 370, two months ago, the region was placed under a communications blockade and several mainstream political leaders, including the father-son duo and Peoples Democratic Party (PDP) chief Mehbooba Mufti were put under house arrest.

This was done to ensure peace in the state and maintain law and order.