DK Shivakumar reached Mumbai to meet dissenting Congress and JDS MLAs from Karnataka but was stopped by Mumbai Police after these MLAs had complained of a threat. 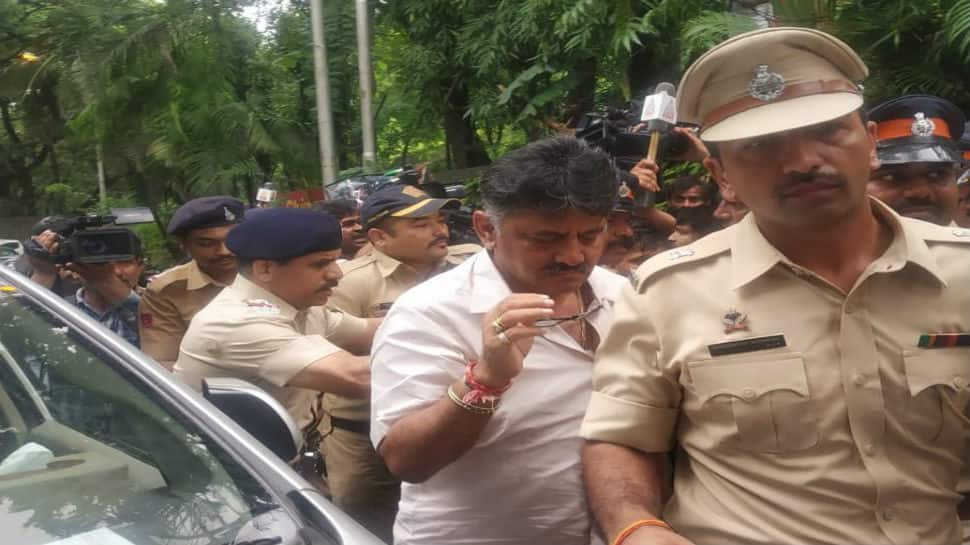 He was snubbed. He was stopped. He was escorted out. Not once did DK Shivakumar, however, stop praising dissenting Congress and Janata Dal Secular MLAs who are currently camped in a posh Mumbai hotel.

The Karnataka minister had reached the hotel on Wednesday morning in a bid to meet the 10 dissenting MLAs whose resignations have thrown the state government back home into an existential crisis. Both Congress and JDS have been working overtime to win back the love of these MLAs with Shivakumar at the epicentre of the 'rescue efforts.' And he continued to try his level best on Tuesday despite accusations and hurdles galore.

Even before Shivakumar had reached Mumbai's Renaissance Hotel, the MLAs camped inside had written to Mumbai Police for additional security because they said they felt threatened. The Congress leader, however, said there was no truth in claims of any threat. "There is no question of threatening. We love and respect each other. I've booked a room here. My friends are staying here.There has been a small problem, we've to hold negotiations. We can't go for a divorce immediately," he told mediapersons after cops halted him at the hotel gates.

Subsequently, Shivakumar's booking was cancelled by the hotel but even this did not perturb the Congress leader. "They should be proud of a customer like me. I love Mumbai. I love this hotel. Let them cancel. I have other rooms also," he was quoted as saying by news agency ANI. "I'll not go without meeting my friends. They will call me. Their hearts will break. I am in touch with them already, hearts of both of us are beating. We are a family, every family has disagreements and then things cool down."

The beating hearts, the love and the family bonds, however, was hardly evident from inside the hotel. Supporters of the dissenting Congress and JDS MLAs kept chanting 'Go Back' slogans against Shivakumar. And throughout his stubborn show of affection, Congress' desperation to win back the dissenting MLAs was in full view.

The resignation of the dissenting MLAs could plunge the HD Kumaraswamy-led government into a massive crisis. These MLAs on Tuesday even moved Supreme Court alleging that the Karnataka Assembly Speaker was deliberately delaying acceptance of their resignations. The matter has been posted for hearing on Thursday.