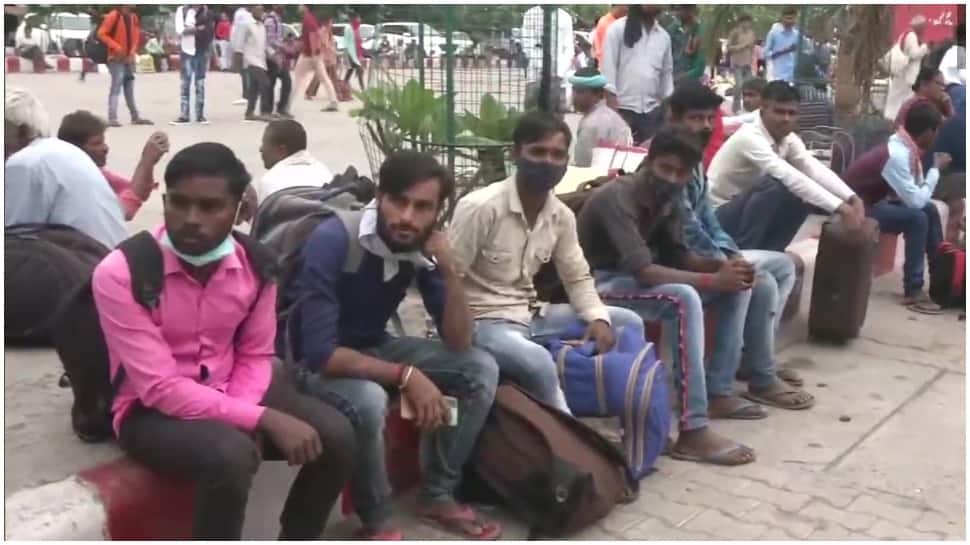 New Delhi: Farmers in Punjab squatted on rail tracks on Monday (October 18)  morning as part of the Samyukt Kisan Morcha's 'rail roko' protest demanding the dismissal and arrest of Union Minister Ajay Mishra in connection with the Lakhimpur Kheri violence. This lead to a huge disruption in the movement of trains and several passengers faced problems commuting via trains.

A nationwide Rail roko agitation was called to demand the removal of Union Minister of State for Home Affairs Ajay Mishra Teni from the Union Cabinet over the Lakhimpur Kheri incident, in which his son Ashish Mishra Teni is an accused.

Meanwhile, the death toll in incidents related to heavy rains, including landslides and flash floods in Kerala has increased to 22. The search and rescue operations are currently underway.

The Central Board of Secondary Education released the complete date sheet for the first term of class 10, 12 board exams today.

West Bengal: Local BJP leaders & workers in Kolkata protest at Shyambazar 5 Point Crossing over the ISKCON temple incident in Noakhali, Bangladesh where the temple was vandalised & a devotee was killed by a mob on October 16.

West Bengal: Local BJP leaders & workers staged a demonstration at Shyambazar 5 Point Crossing in Kolkata today over the incident where an ISKCON temple in Noakhali, Bangladesh was vandalised & a devotee killed by a mob on Oct 16th. The protesters were later detained by Police. pic.twitter.com/U0cv5Uaaf4

External Affairs Minister (EAM) S Jaishankar on Monday (October 18) said that he had "very productive talks" with Israel`s Foreign Minister Yair Lapid, where they discussed a wide range of regional and global issues, including the in-principle agreement on mutual recognition of Covid vaccination certification. During the meeting, the two ministers agreed to resume FTA (Free Trade Agreements) negotiations next month.

Our officials have actually agreed on resumption of India-Israel, Free Trade negotiations. Starting the negotiating process, talks will start in Nov &they're very confident that they'd be able to conclude negotiations by next June: EAM after meeting Israeli Foreign Min Yair Lapid pic.twitter.com/OlltWDaanv

'Rail Roko' agitation was fine. We will make a program for our further strategy. Until Teni (MoS MHA Ajay Mishra Teni) is arrested & he resigns, we'll continue putting forth our views. He is an accused u/s 120(B) of IPC, he can't roam out in the open: Rakesh Tikait, BKU leader pic.twitter.com/qLbHmV8jNU

Karnataka: Government permits the reopening of schools for classes 1 to 5 for physical classes from October 25, 2021, with mandatory consent letter from parents of the students.

Karnataka: Classes for std 1-5 permitted to reopen from October 25th, strictly adhering to #COVID19 appropriate behaviour and SOPs issued by the Dept of Primary and Secondary Education. Parental consent letter for physical classes is mandatory. pic.twitter.com/FnIenC2Nrn

CBSE releases official notice to warn against fake date sheet being circulated on social media for the forthcoming term 1 exams of class X & XII in November 2021.

It has come to the notice of CBSE that a fake date sheet is being circulated on social media for the forthcoming term 1 exams in Nov 2021, to confuse students of class X & XII. It is clarified that the board has not released any official notification in this regard till now: CBSE pic.twitter.com/ww2ZoArMKD

Uttarakhand: The peaks beyond Badrinath and Kedarnath received light snowfall, whereas the lower areas in Chamoli district were lashed by continuous showers. The rains continue in Uttarkashi and Dehradun as well. The temperature plummets in the region.

PM Narendra Modi to inaugurate Kushinagar international airport on October 20, 2021.  The inaugural flight will land at the airport from Colombo, Sri Lanka carrying 125 dignitaries & Buddhist Monks, highlighting the convenience to Buddhists across the world to visit the Mahaparinirvana Sthal of Lord Buddha.

PM Narendra Modi will inaugurate Kushinagar International Airport in Uttar Pradesh on 20th October 2021 in the presence of Gov Anandiben Patel, CM Yogi Adityanath & Civil Aviation Minister Jyotiraditya Scindia among others. The International Airport will get operational this week pic.twitter.com/hfGxqfZKTy

An all-weather, 500 m long tunnel, Nechiphu is being constructed between 82 to 88 Km along Balipara-Charduar Tawang Road, under Project Vartak of Border Roads Organization in Arunachal Pradesh that will cut short travel distance by 6 km and travel time by 15-20 minutes.

The Union Health Ministry on Monday (October 18) informed that more than 102 crore COVID-19 vaccine doses have been provided to states and union territories so far to step up the COVID-19 vaccination programme.

CPRO, Northern Railway on Rail Roko: Around 50 trains and 130 locations have been affected due to farmers agitation in Punjab and Haryana.

Harendra Singh, DCP Railways on 'Rail Roko' stir: Government Railway Police is patrolling all railway stations and tracks. Till now, there are no reports of a disturbance at any railway tracks or cancellation of trains. We're working in close coordination with the GRP of neighbouring states.

Delhi: Union Defence Minister Rajnath Singh was seen at Sena Bhawan while he was going to attend the second edition of the Indian Navy's Commanders Conference

Haryana: Protestors have blocked railway tracks in Bahadurgarh to extend support to the Rail Roko Andolan called by the farmers' unions. Meanwhile, a Rapid Action Force team has also been deployed at Sonipat Railway Station.

Samyukta Kisan Morcha has called for nationwide 'Rail roko' in protest against the incident pic.twitter.com/Ucvmfq6PcM

Jammu and Kashmir: A group of migrant workers leaves Srinagar after recent incidents of targeted killings of non-Kashmiris by terrorists, reports ANI.

J&K: A group of migrant workers leaves from Kashmir's Srinagar after recent incidents of targeted killings of non-Kashmiris by terrorists

"Situation is getting bad here. We're scared, we've children with us & hence going back to our hometown," says a migrant from Rajasthan pic.twitter.com/lcdUosH9eB

CBSE Board Exams: The Central Board of Secondary Education is scheduled to release the complete datesheet for the first term of class 10, 12 board exams today. Stay with Zee News for all the updates on the CBSE datasheet.

Haryana: A special CBI court in Panchkula will today pronounce the quantum of punishment for Dera Sacha Sauda chief Gurmeet Ram Rahim Singh and four others in connection with the murder of his former manager Ranjit Singh in 2002. Read more here

Gujarat: Two people have died and 125 have been rescued after a fire broke out at the packaging factory early morning today in Kadodara's Vareli in Surat.

Surat | Rescue operation has concluded at the packaging factory where a fire broke out early morning today in Vareli, Kadodara

Rail roko andolan: The Samyukta Kisan Morcha has called for a nationwide 'rail roko' agitation demanding the removal of Union Minister of State for Home Affairs Ajay Mishra ‘Teni’ from the Union Cabinet over the Lakhimpur Kheri incident, in which his son Ashish Mishra Teni is an accused. Farmers are also protesting against the new farm laws.

Uttar Pradesh: The Lucknow Police has said that they will take against people who will participate in the 'Rail Roko Andolan' today. The Police informed that 144 CrPC is also imposed in the district and that they will impose National Security Act if anyone tries to disrupt normalcy.