New Delhi: Creating electoral histories seems to have become a norm for the Bharatiya Janata Party (BJP) under the leadership of Narendra Modi and Amit Shah. After securing a bigger mandate in Lok Sabha election 2019 than 2014, the Election Commission (EC) on Friday officially declared that the BJP has secured 303 seats in the poll. Decimating the opposition, the BJP-led National Democratic Alliance (NDA) bagged 354 seats in the 17th Lok Sabha.

It was BJP's second consecutive absolute majority in Lok Sabha election under Narendra Modi's leadership. The saffron party has surpassed its 2014 General election performance when it won 282 seats with the NDA securing 336. Modi is the first non-Congress prime minister to come back to power with a majority for the second time after Indira Gandhi in 1971.

The euphoria of BJP-led NDA's victory was evident from Narendra Modi's speech on Thursday night, where he addressed BJP workers at party headquarters in Delhi after the massive victory. PM Modi and BJP president Amit Shah were showered with flower petals as they made their way inside the office. The duo was joined by top BJP leaders and their allies at the office too. 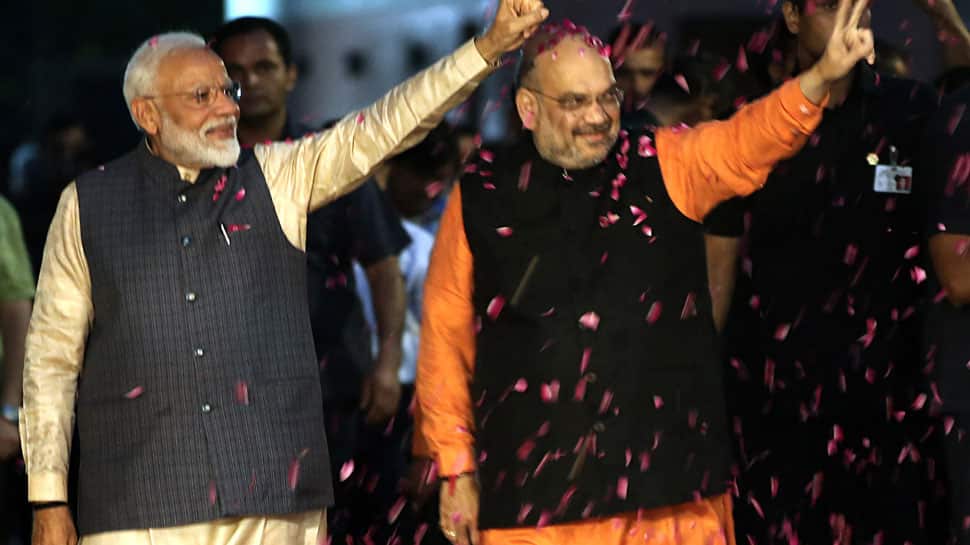 "This is India's victory," the prime minister said to loud cheers from the party workers and added, "Every cell of my body is dedicated to the nation."

"We had gone to people seeking a mandate to build a new India. People have given us their blessings for it. We have to move ahead. We have to take everyone with us, even our opponents. We have to work for the benefit of the country," he said. "You have filled this fakir's bag with a lot of hope. All your hopes, dreams, ambitions are dependent on it," he told the partymen in the national capital.

He also thanked the people of the nation via Twitter. "With all+ development for all+ everybody's confidence = victorious India," Modi tweeted in his first reaction to BJP's landslide win.

Modi won from Varanasi with a margin of over 4.5 lakh votes while Amit Shah took Gujarat's Gandhinagar by over 5.5 lakh votes, a record bigger than even what BJP's patriarch LK Advani could achieve.

The Modi force even uprooted the Congress from its bastions like Amethi in Uttar Pradesh and Madhya Pradesh's Guna.  In Amethi, Rahul Gandhi lost to Smriti Irani by over 55,000 votes. However, he won the Wayanad seat in Kerala.

Former prime minister and JD(S) chief HD Deve Gowda was knocked out in Tumkur Lok Sabha constituency of Karnataka where the BJP bagged 25 of the 28 seats. Senior Congress leader Mallikarjun Kharge lost his Kalburgi seat for the first time ever. BJP's Umesh G Jadhav won from the seat.

In Uttar Pradesh, the Samajwadi Party-Bahujan Samaj Party (mahagathbandhan) also lost to BJP and has won 62 of the 80 seats and counting in Apna Dal, both the parties have registered a victory in 66 seats.

Like 2014, there is no Leader of Opposition (LOP) in the House this time as none of the parties won 10 per cent of the seats. Congress, the single largest party in Opposition, won 52 seats. (54-mark is required for the LOP status).

After BJP's victory was declared, Rahul Gandhi at a press conference in Delhi on Thursday said, "The people of India have decided that Narendra Modi will be the PM again and I fully respect it."

Kerala, Tamil Nadu and Andhra Pradesh are some of the states where BJP failed to put up a good show as opposed to Odisha, West Bengal and Telangana.