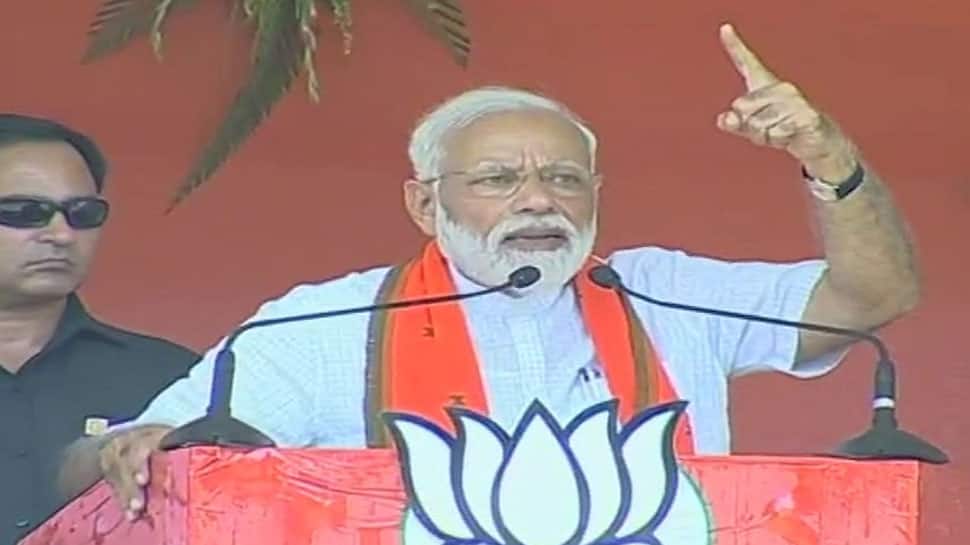 Mathurapur: Prime Minister Narendra Modi on Thursday claimed that the West Bengal Police, in connivance with the state government, was trying to wipe out evidence of the desecration of Iswar Chandra Vidyasagar's statue.

Addressing a rally here, PM Modi said Chief Minister Mamata Banerjee, "frustrated over her imminent defeat", has threatened to put him behind bars after the general elections.''

"TMC goons are spreading violence, and they vandalised the statue of Vidyasagar. The way the state government erased proof of the Narada and Sarada scams, in the same manner, it is trying to remove evidence in this incident," the PM said.

Those involved in the act of vandalising the statue should be given exemplary punishment, the PM insisted.

Police officers are trying to wipe out the evidence of the incident in order to save the TMC goons, PM Modi alleged.

"The TMC and their goons have made Bengal a hell. Those involved in this act, in this sin should be given strong punishment," he said.

"Didi has lost her cool in the face of imminent defeat and has become frustrated, and is now threatening to put me behind bars," Modi said.

Taking a dig at Banerjee's nephew, Abhishek, the prime minister said the "aunt-nephew 'jodi' is only interested in looting Bengal and running the 'tolabaji' syndicate (extortion racket)".

The days of the 'bua-bhatija' (aunt-nephew) government in the state are numbered going by the mood of the people, Modi said, adding, the BJP will win the majority of the 42 Lok Sabha seats in the state and over 300 seats in the country.

Abhishek Banerjee, who is considered the number two in the TMC, is seeking re-election from the Diamond Harbour Lok Sabha seat.

"Democracy has been maligned by violence in Bengal. The TMC has problem with Durga Puja, Saraswati Puja and even chanting 'Jai Shree Ram' is a crime in Bengal," the PM said.

It is the BJP which is fighting to restore democracy in Bengal, Modi asserted and claimed that the chief minister had even threatened to capture its party offices in the state, he said.

"You and your party are now known for grabbing land. Because of this, people have lost confidence in you and have made up their mind to defeat you," Modi said.

Dubbing Banerjee as "sticker Didi", Modi said she is not interested in the development of Bengal, but keen on putting her own stickers on central projects.

He said the TMC supremo does not have faith in the country's prime minister, but she doesn't hesitate from praising the prime minister of Pakistan.

In an apparent reference to the recent arrest of BJP youth wing activist Priyanka Sharma, who walked out of jail on Wednesday after being arrested for posting a morphed picture of Banerjee on Facebook, PM Modi said she puts saffron party workers behind bars, but lets TMC goons out in the open to "torture the masses".