97 Lok Sabha constituencies will go to the polls on Thursday. 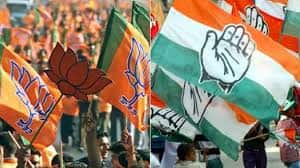 New Delhi: The campaigning came to an end on Tuesday for 97 Lok Sabha constituencies spread over 13 states and Union Territories which will go to the polls on Thursday in the second phase of the mega seven-phase electoral exercise.

Since poll timings vary in different seats, the campaigning period also ended at different times between 3 pm and 6 pm in different constituencies (except Madurai) -- 48 hours before the voting closure time.

In Madurai, since the polling period is till 8 pm due to the famous car festival that day, campaigning in the constituency was allowed till 8 pm on Tuesday as well.

The 48-hour period preceding the conclusion of voting is called the "silence period" during which any kind of political campaigning is prohibited.

In the first phase, voting will take place in all 39 seats in Tamil Nadu. It will also cover 14 seats in Karnataka, 10 in Maharashtra, eight in Uttar Pradesh, five each in Bihar and Odisha, and three each in Chhattisgarh and West Bengal.

The seven-phase Lok Sabha elections started on April 11 and would conclude on May 19. Counting of votes will take place on May 23.