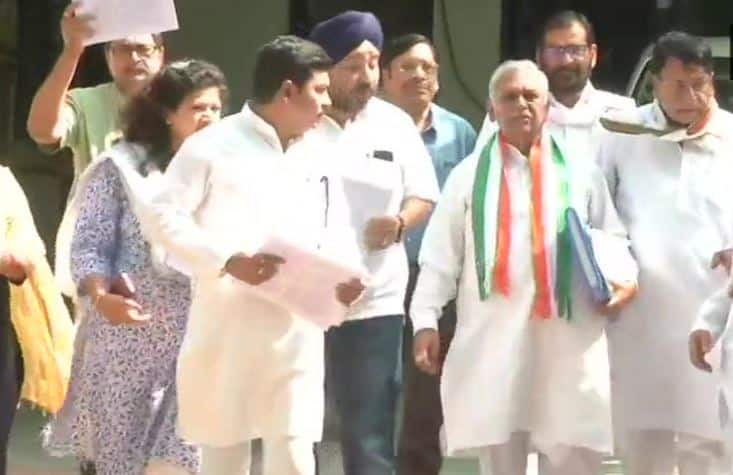 Bhopal: A Congress delegation led by former Union Minister and Congress leader Suresh Pachouri on Tuesday reached the official residence of former Madhya Pradesh Chief Minister Shivraj Singh Chouhan with documents containing details of farmers whose loans have been waived off by Congress-led government in the state.

The Congress' move is seen as a reaction to Chouhan's claim that both Congress president Rahul Gandhi and Madhya Pradesh Chief Minister Kamal Nath have given contradictory statements on the matter of loan waiver to farmers in the state.

"Both Congress president Rahul Gandhi and Chief Minister Kamal Nath gave contradictory statements on farm loan waiver. While the former is saying that the loans of farmers were waived within two hours of forming a Congress government in the state, the latter has sent messages to lakhs of farmers on their mobiles stating that though the application for waiving loans have been received it cannot be granted as Model Code of Conduct (MCC) for the Lok Sabha elections is in place," Chouhan had said on Sunday.

Accusing Rahul Gandhi of deceiving the farmers, the senior BJP leader and former MP chief minister said that the Congress chief is lying on the issue of loan waiver of farmers.Chouhan stressed that the Congress had promised to waive off the loan within 10 days of coming to power but the party has failed to keep its promise even after 120 days.

"The Congress president has deceived farmers and is telling an utter lie on the issue of farm loan waiver. 120 days have passed since the Congress government was formed in the state but the farmers' loans have not been waived. Rahul Gandhi is lying that loans have been waived within two hours. He had promised that if within 10 days loans are not waived then he would change the Chief Minister," remarked Chouhan.

According to Chouhan, the total loan amount of farmers in Madhya Pradesh is Rs 48,000 crore while the government has allocated only Rs 5,000 crore in the budget for farmers.