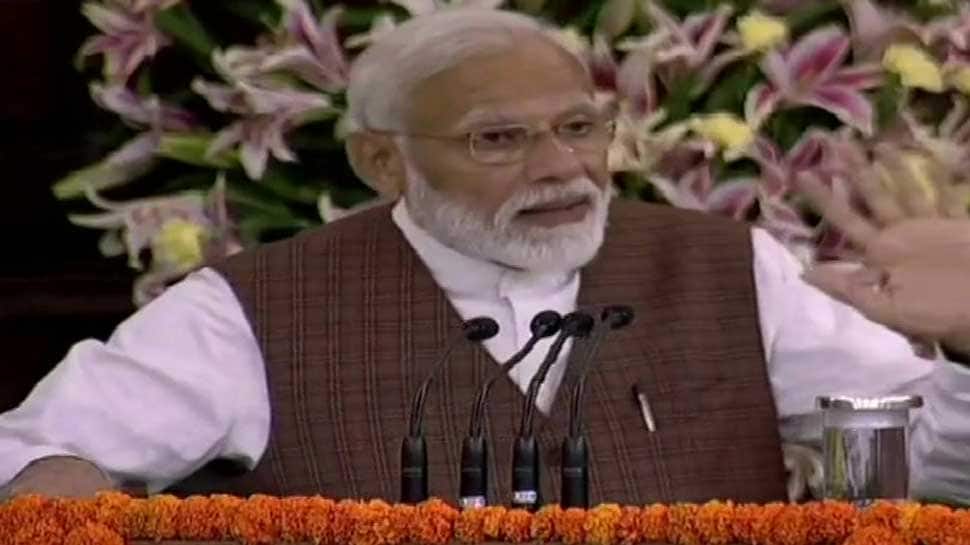 NEW DELHI: Prime Minister-elect Narendra Modi, who was on Saturday unanimously elected as leader of the BJP parliamentary party and the National Democratic Alliance (NDA) at a function in the Central Hall of Parliament, warned the newly-elected lawmakers not to believe in media reports on the names being considered for ministerial berths.

''Don't trust media reports on names being considered for ministers post, responsibilities will be given as per norms,'' PM-elect Narendra Modi told newly-elected NDA MPs.

PM-elect Modi also asked the NDA leaders to maintain restraint in speech, saying that some statements made for publicity often create trouble for the party and the alliance.

''Those elected as MPs should shun VIP culture, they should stand in queues like other citizens,'' Modi said.

Prime Minister Narendra Modi, addressing members of the National Democratic Alliance, said that the minorities have been cheated by the opposition and that needs to be stopped immediately.

"We have worked for sabka saath, sabka vikas, now we have to strive for sabka vishwas," the PM said.

"The way the poor have been cheated, the minorities have been deceived the same way. It would have been good if their education, their health had been in focus. I expect from you in 2019 that you would be able to make a hole in that deception. We have to earn their trust," PM-elect Narendra Modi said in Parliament's Central Hall.

PM-elect Modi made these remarks after he was unanimously elected as the BJP parliamentary party leader and of the NDA.

"I am happy to announce that the BJP parliamentary party has unanimously elected Narendra Modi as its leader," BJP president Amit Shah announced.

"Narendra Modi Ji has been unanimously elected leader by the 353 NDA members. I thank all the newly-elected members and congratulate him for his unanimous election," Shah said.

After being elected leader of the NDA, Modi touched the feet of BJP veterans LK Advani, Murali Manohar Joshi and Parkash Singh Badal and sought their blessings.

Chief ministers of different NDA-ruled states were also present among others.

PM-elect Modi will now meet President Ram Nath Kovind and stake claim to form the next government after the BJP-led NDA alliance won a historic mandate in the 2019 Lok Sabha election.

Along with its NDA allies, the BJP-led coalition has 351 members in the Lower House.