Several IAS and IPS officers have also been transferred by the West Bengal government.

KOLKATA: The West Bengal government led by Chief Minister Mamata Banerjee sent four senior IPS officers, who were posted by the Election Commission during the 2019 Lok Sabha election to ensure free and fair polling, on ''compulsory waiting'' on Monday.

According to reports, several IAS and IPS officers have also been transferred by the state government. The Mamata government on Monday appointed Alapan Bandyopadhyay as the new Home Secretary. Bandyopadhyay replaces Atri Bhattacharya. Bhattacharya was transferred by the Election Commission of India (ECI) and chief secretary Moloy De was looking after the Home department.

This is being seen as one of the biggest reshuffling of the IAS and IPS officers by the Bengal government after the conclusion of the 2019 elections.

The Mamata government had on Sunday reinstated 11 IPS officers, including former Kolkata police commissioner Rajeev Kumar, to their old posts. This was done on Sunday – the day when the Model Code of Conduct ceased to be in operation after the declaration of Lok Sabha election results. 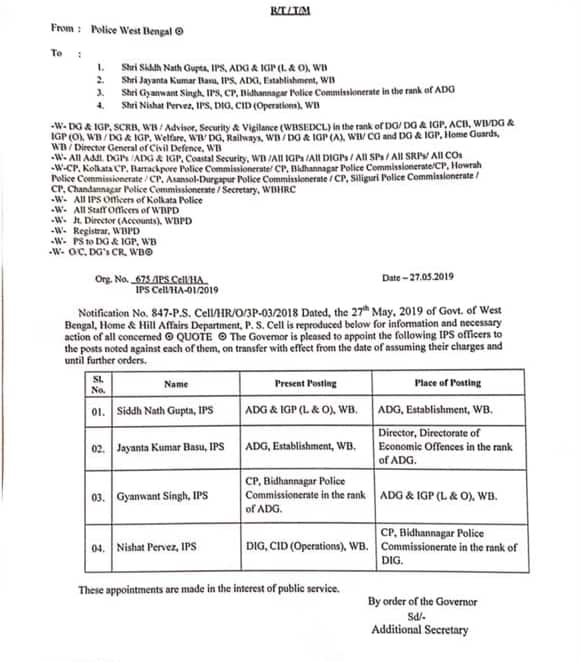 Rajeen Kumar was among those senior officers who were removed by the poll body from the post of Additional Director General of West Bengal CID.

He was reinstated by an order issued by the state government on Sunday.

Kumar was embroiled into a controversy in the Saradha chit fund scam. He was relieved from his duty by the EC following violence in the city during BJP president Amit Shah's roadshow.

According to the order issued by the state government, Rajesh Kumar, who was made the Kolkata Police Commissioner by an EC directive, was sent on "waiting for posting order", while his predecessor Anuj Sharma was named in his place.

The EC had ordered the transfer of Sharma from the post of Kolkata Police Commissioner to the position of ADGP and IGP (Operations) of the state police.

Natarajan Ramesh Babu, who was appointed the Commissioner of Bidhannagar Police by the EC, was transferred from the post and sent on "waiting for posting order".

Gyanwant Singh, the earlier Bidhannagar police commissioner, who was transferred by the EC and appointed as the Director of the Directorate of Economic Offences, was brought back to his old post. Singh has now been appointed as ADG Law & Order.

IPS Nishat Pervez has been Commissioner, Bidhannagar Police in the rank of DIG.

Shiddh Nath Gupta has been appointed as ADG Establishment, he is presently posted as ADG & IGP Law & Order.

Devendra Prakash Singh, the DIG Midnapore Range, was named as the new Commissioner of Police of Barrackpore Police in place of Sunil Kumar Choudhary.

Choudhary, who was made the CP of Barrackpore Police by the Commission, was send on "waiting for posting order".

Shyam Singh was reinstated as the Superintendent of Police of Birbhum in place of Avvaru Ravindranath, who was made the new DC, Zone II (airport division) under the Bidhannagar Police Commissionerate.

Amit Kumar Singh who was appointed as the Superintendent of Police of Coochbehar district by the EC was transferred by the state government and put on "waiting for posting order".

The Model Code of Conduct came into force on March 10 when the 2019 Lok Sabha election was announced by the Election Commission.

The poll panel had on Sunday informed the Cabinet Secretary and Chief Secretaries of state governments that the model code has been lifted with immediate effect.