The fifth phase of voting in Lok Sabha election 2019 has over 8 crore people in seven states eligible to cast their vote.

In the midst of peak summer heat, India is all set to once again usher in voters to the polling booth as the country gets ready for the fifth phase of Lok Sabha election 2019. The first four phases were largely peaceful with enthusiastic voters coming out to have a say in who will govern the country over the course of the next five years. With voting in 373 constituencies over, the half-way mark is well and truly behind even as another 51 constituencies gear up for Monday's polling.

The fifth phase is the smallest of all seven phases - in terms of the number of constituencies. Polling will take place across seven states - Bihar, Jammu and Kashmir, Jharkhand, Madhya Pradesh, Rajasthan, Uttar Pradesh and West Bengal - with a total of 8.75 crore voters eligible to exercise their franchise. Once again, there is a massive security deployment at over 96,000 polling stations to ensure that the election is fair and peaceful. In West Bengal, in particular, central forces have replaced state police in view of poll-related violence in the state in each of the four phases of voting so far.

Barring West Bengal, polling has been largely peaceful across the country so far although there have been some incidents of EVM malfunctioning. 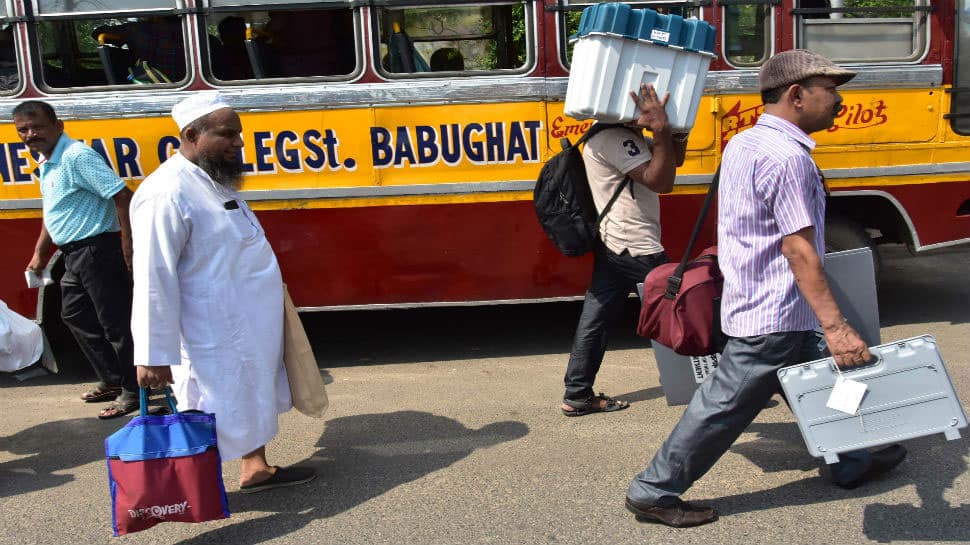 The EC is taking extra measures to ensure that EVMs do not develop any snags as voters come out to choose between a total of 674 candidates in the fifth phase. Among these, according to the Association for Democratic Reforms (ADR) which analysed affidavits of 668 candidates, there are 184 crorepatis. The average assets of candidates in this phase is Rs 2.57 crore. There are also three candidates who have declared nil assets.

Interestingly, the fifth phase has the highest percentage of women candidates so far in Lok Sabha election 2019 - 12 per cent. (Read full report here)

The campaigning by almost all of these candidates in the run-up to the fifth phase of voting has been intense. Political parties and their respective leaders have left no stone unturned in taking their messages to the people of the country. The seven states where polling will take place on Monday will have the final say.

Here's where voting will take place in the fifth phase:

Bihar: Voting here will take place in the constituencies of Sitamarhi, Madhubani, Muzzafarpur, Saran and Hajipur. As per the data available, there are total 87,66,722 voters including 16,875 service voters are eligible to exercise their franchise in the fifth phase. Of the electorate, 46,78,401 are males, 40,88,096 females and 225 third gender voters who will have to choose from 82 candidates. While the NDA would be looking at a dominant performance in all of these constituencies, rival parties like RJD and RLSP are unlikely to make things easy. (Read more here)

Jammu and Kashmir: Voting here will take place in Anantnag - the only constituency which has seen voting in three phases due to security reasons, and in Ladakh. Security arrangments here, as expected, is the highest to ensure that polling takes place in a peaceful manner. 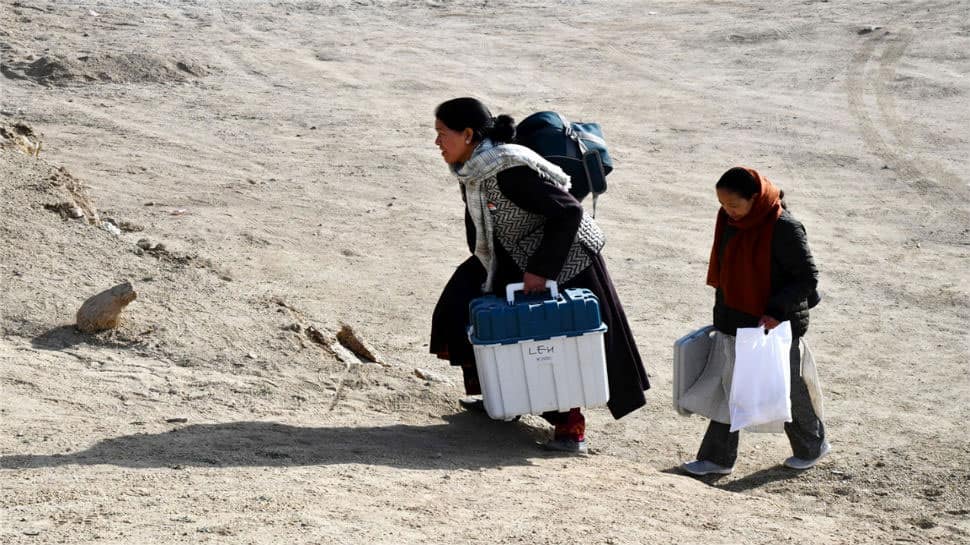 Jharkhand: Voting will take place in the constituencies of Kodarma, Ranchi, Khunti and Hazaribagh. While Kodarma, Ranchi and Hazaribagh are General seats, Khunti has been reserved for Scheduled Tribe candidates. As per the data from Election Commission, there are a total of 65,87,028 electors in the four constituencies, out of which 34,42,266 are male electors, 31,44,679 female electors and 83 third gender electors. There are 1,09,025 electors in the age group of 18-19 years in Phase V in Jharkhand. (Read more here)

Madhya Pradesh: Polling will be held in Tikamgarh, Damoh, Khajuraho, Satna, Rewa, Hoshangabad and Betul seats. One hundred and ten candidates are in the fray for these seven seats. There are 14 candidates in the fray in Tikamgarh, 15 in Damoh, 17 in Khajuraho, 21 in Satna, 23 in Rewa, 11 in Hoshangabad and nine in Betul. The official said 15,240 polling booths have been set up for 1.19 crore registered voters. (Read more here)

Rajasthan: 12 constituencies in the state will vote on Monday. These are Ganganagar, Bikaner, Churu, Jhunjhunu, Sikar, Jaipur Rural, Jaipur, Alwar, Bharatpur, Karauli-Dholpur, Dausa and Nagaur. While Ganganagar, Bikaner, Bharatpur, Karauli-Dholpur PCs are reserved for Scheduled Castes, Dausa seat is reserved for Scheduled Tribes. There are 134 candidates, including 16 women, in the fray for these 12 Lok Sabha seats. Nearly, 2,31,79,623 voters including 1,10,755 service voters are eligible to vote in the fifth phase from the state. The electorate has 1,22,53,615 males, 1,09,25,883 female and 125 third gender voters. (Read more here)

Uttar Pradesh: The state will see voting in 14 constituencies. These are Amethi, Bahraich, Banda, Barabanki, Dhaurahra, Faizabad, Fatehpur, Gonda, Kaiserganj, Kaushambi, Lucknow, Mohanlalganj, Rae Bareli and Sitapur. About 2.47 crore people are eligible to vote in the 14 constituencies where 182 candidates are in the contest. (Read more here)

West Bengal: Seven constituencies in volatile West Bengal will see voting on Monday. These are  Bongaon, Barrackpur, Howrah, Uluberia, Serampore, Hooghly and Arambagh where  an electorate of 1,16,91,889 will decide the fate of 83 candidates. (Read more here)

Key contests to watch out for:

The fifth phase of Lok Sabha election 2019 has some mouth-watering clashes to look forward to. Several political big-wigs are battling it out in this phase. Some of these are:

Amethi - Rahul Gandhi (Congress) vs Smriti Irani (BJP): This is, perhaps, the most intense of all electoral battles to watch out for. While Rahul had defeated Smriti in the 2014 edition of Lok Sabha election, the BJP candidate had managed to put up a stiff fight. This year, she is even more determined to bring down the Congress president and a win for her could be a massive blow to the party. Rahul is also contesting election from Wayanad in Kerala where voting took place in the third phase.

Raebareli - Sonia Gandhi (Congress) vs Dinesh Pratap Singh: The UPA chairperson faces off against a former Congress member in what has always been a fortress for the Gandhi family. Defeating Sonia from here may not be an easy prospect but a win for Dinesh Pratap Singh here, if it does happen, could be a massive shot in the arm for the BJP.

Lucknow - Rajnath Singh (BJP) vs Poonam Singha (SP): The Home Minister is a strong favourite to win from here and he takes on Poonam Sinha - wife of Shatrughan Sinha - who only recently joined the Samajwadi Party. Poonam is the richest of all candidates in the fifth phase of election. Her husband is a former BJP member who is now with Congress. Can she manage to stage an upset of epic proportions?

Jaipur Rural - Rajyavardhan Singh Rathore (BJP) vs Krishna Punia (Congress): Both candidates have brought laurels to India at international sporting events but politics is a whole different ball game. Rathore registered a strong performance in the 2014 edition of Lok Sabha election but Punia may yet be a worthy opponent. The two Olympians could set the electoral stage on fire this time around.

Hazaribagh - Jayant Sinha (BJP) vs Gopal Sahu (Congress) vs Bhuvneshwar Mehta (CPI): Many expect Sinha to once again cruise to an easy win from this constituency in Jharkhand but Sahu and Mehta are credible political foes.

The fifth phase of voting, therefore, may be the smallest in terms of the number of constituencies but has some cracker contests at hand. Polling will take place between 7am and 6pm and the EC has once again urged people to come out in high numbers to cast their vote. Six thousand wheelchairs and ramps have been put in place to ensure that even specially-abled people face no hurdles at polling booths.