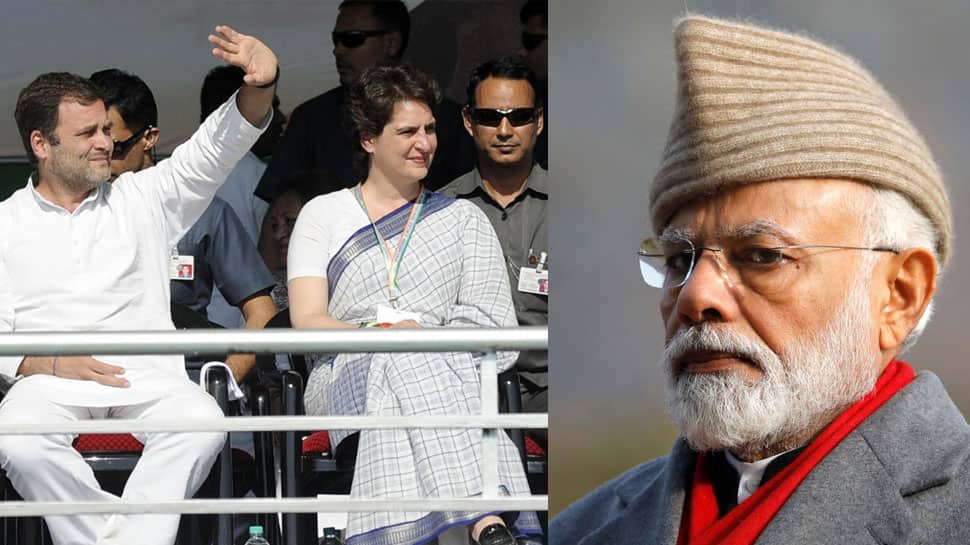 NEW DELHI: With the battle for Lok Sabha election 2019 heating up across the country, Prime Minister Narendra Modi launched a fiery attack on Congress party and the Gandhi family on Wednesday.

In an 1165-worded blog post, the Prime Minister recalled how the nation decided to vote for vikas (development) over dynastic politics and 'opportunities over obstacles' in 2014 general election.

Comparing the achievements of the NDA government to the previous UPA rule, the PM writes, “India has made remarkable achievements in sanitation coverage (from 38% in 2014 to 98% now), banking the unbanked, financing the un-financed, building futuristic infrastructure, homes for the homeless, providing healthcare for the poor and educating the youth.”

Openly addressing Congress, PM Modi says “no amount of intimidation will change the ground realities. Curbing freedom of expression will not change people’s poor impression of the party.”

Less than a month left for polls, PM Modi asked the voters to “think wisely” and “work hard to strengthen the intuitions given to us by the makers of our Constitution.”

In the summer of 2014, the people voted decisively for:

Indians were tired of our beloved nation being in the Fragile Five, where corruption, cronyism and nepotism made headlines instead of anything positive.

India voted to shed the baggage of the past in pursuit of a better future.

The mandate of 2014 was epoch-making also because it was for the first time in the history of India that a non-dynastic party was blessed with a complete majority.

When a Government works with the spirit of ‘India First’ instead of ‘Family First’, it shows in its working.

Over the last five years, the Indian economy has been the cynosure of the world’s eyes.

India has made remarkable achievements in sanitation coverage (from 38% in 2014 to 98% now), banking the unbanked, financing the un-financed, building futuristic infrastructure, homes for the homeless, providing healthcare for the poor and educating the youth.

Reflective of this paradigm shift is the fact that now, there is a Government that puts institutions above everything else.

India has seen that whenever dynastic politics has been powerful, institutions have taken a severe beating.

The Interim Budget session witnessed productivity of 89% in the Lok Sabha and a mere 8% in the Rajya Sabha.

The nation knows the numerical dynamics of both houses. It is clear that when a non-dynasty party in higher number its tendency to work more is visible.

India should ask- why was the Rajya Sabha not working as productively as the Lok Sabha? Which were the forces disrupting the House and why?

Dynastic parties have never been comfortable with a free and vibrant press. No wonder, the very first Constitutional Amendment brought in by the Congress government sought to curtail free speech. Speaking truth to power, which is the hallmark of a free press was seen as vulgar and indecent.

The recent UPA years saw the bringing of a law that could land you in prison for posting anything “offensive.”

A tweet against the son of a powerful UPA minister could land innocent citizens in jail.

Just a few days ago, the nation watched with horror when a few youngsters were arrested for expressing their true feelings at a programme in Karnataka, where the Congress is sharing power.

But I want to tell the Congress that no amount of intimidation will change the ground realities. Curbing freedom of expression will not change people’s poor impression of the party.

When the sun set on the evening of 25th June 1975, it took with it the democratic ethos of India.

A hurried radio address by the then Prime Minister showed the extent to which the Congress can go to safeguard the interests of one dynasty.

The Emergency made the nation a prison overnight. Even to express was to commit sin.

The 42nd Amendment put curbs on the courts, covering the Parliament and more.

It took a groundswell of public opinion to end the Emergency but the anti-constitutional mindset of those who imposed it remained. The Congress has imposed Article 356 almost a hundred times, with Mrs. Indira Gandhi herself doing so about fifty times. If they did not like a state government or leader the government was dismissed.

Congress’ contempt for the courts is anyway legendary. It was Mrs. Indira Gandhi who called for a “committed judiciary”, which seeks to make the courts more loyal to a family than to the Constitution.

This pursuit of a “committed judiciary” made Congress overlook several respected Judges while appointing the Chief Justice of India.

Congress’ modus operandi is simple- reject, discredit and threaten. If a judicial verdict goes against them, they reject it, then they discredit the judge and thereafter, talk about bringing impeachment motions against the judge.

This comment gives you a glimpse of how Congress treats government institutions.

Remember the UPA years, when the Congress questioned the CAG just because that institution exposed their corrupt shenanigans like 2G, Coal Scam etc.

CBI became the Congress Bureau of Investigation- it was used time and again on political parties just before crucial parliamentary votes.

Tensions were deliberately created in organisations such as IB and RAW.

A policy decision taken by no less than the Union Cabinet was torn into pieces by someone who was not a member of any ministry and that too, in a press conference.

The NAC was created as a body parallel to the Prime Minister’s Office. And then, Congress talks about institutions?

In the 1990s, a fictitious spy scandal was created in India’s premier space agency ISRO just to suit Kerala Congress’ factional politics. It did not matter to them that a brilliant scientist had to suffer due to that.

Congress has always seen the defence sector as a source of income which is why the armed forces never got the respect from the Congress that they deserved.

After 1947, every Congress government has seen multiple defence scams. They began with jeeps and then moved to guns, submarines and helicopters.

Every middleman is linked to one family.

When a top Congress leader calls the Army Chief a Gunda and is subsequently promoted in the party rank and file, it shows their scant regard for the forces.

When our air warriors strike at terrorists, Congress questions that too.

Congress’ own (lack of) internal democracy and sense of entitlement:

If a leader dares to dream to head that party, he or she is shunted out of the Congress.

The sense of entitlement can be seen in their conduct towards routine legal processes. At present, their top leadership is on bail vis-a-vis a major scam. When the authorities seek to question them on their dealings, they do not even bother to reply.

Are they scared of accountability or do they not believe in it?

From the press to parliament.

From soldiers to free speech.

From the constitution to the courts.

Institutional insult is the Congress way.

Everyone is wrong, only the Congress is correct.

As you go to vote- remember the past and how one family's desire for power cost the nation so greatly.

If they could do it then, they can surely do it now.

Let us stay vigilant and work hard to strengthen the intuitions given to us by the makers of our Constitution.