JD(S) will support Congress in stopping BJP from coming back to power: HD Deve Gowda

The former prime minister said that the results of Lok Sabha poll will be declared on May 23 and a clear picture will emerge before the entire country on that day. 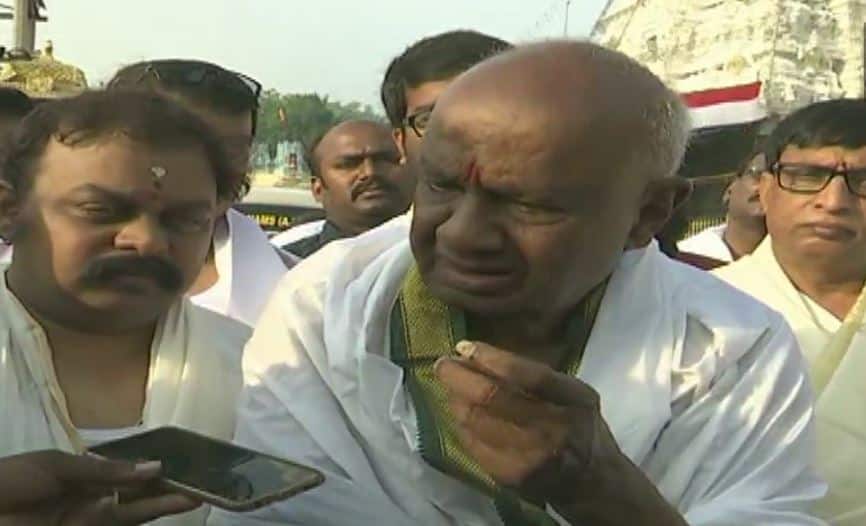 Former prime minister and JD(S) chief HD Deve Gowda on Saturday said that his party is standing firmly with Congress and he will not like to speak more this matter. Gowda said that the results of Lok Sabha poll will be declared on May 23 and a clear picture will emerge before the entire country on that day.

"We are with Congress, I don't want to speak anything more. On 23rd results will come, clear picture will be known to the entire country & what further development takes place," the JD(S) chief was quoted as saying by ANI.

JD(S) Chief and Former Prime Minister HD Deve Gowda: We are with Congress, I don't want to speak anything more. On 23rd results will come, clear picture will be known to the entire country & what further development takes place. pic.twitter.com/sxbgQXwV2D

The former prime minister made the remarks after offering prayers at Lord Venkateshwara temple on the occasion of his birthday. Gowda was accompanied by his family members, including Karnataka Chief Minister HD Kumaraswamy. The JD(S) supremo stressed that since his party is the coalition partner of the Congress in Karnataka and they have contested the Lok Sabha poll in alliance, his party would support the Congress in order to keep BJP away from power.

On the news that UPA chairperson Sonia Gandhi had called a meeting of non-NDA party leaders on May 23, Gowda remarked that he has not received any invite from Sonia Gandhi yet but he would be happy to attend the meeting. He added that by calling the meeting, Sonia Gnadhi is showing her “political maturity”.

The JD(S) chief also said that it is impossible for regional parties to form a government at the Centre without Congress' support. He added that many leaders want to become the PM and it is necessary that different parties need a consensus over the prime minister's name.

Meanwhile, talking to media, Karnataka CM HD Kumaraswsamy said that Congress and JD(S) alliance has performed well in the Lok Sabha election and the alliance would win at least 18-19 Lok Sabha seats out of total 28 from Karnataka. He added that JD(S)' support to Congress will continue both at state as well as national level.

3 Lok Sabha seats in Jharkhand to vote in final phase, Shibu Soren in fray from Dumka