Bihar witnessed a tough fight between NDA and Mahagathbandhan during the Lok Sabha Election 2019. 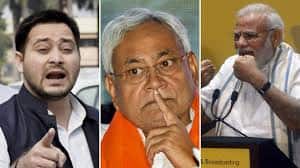 The Bharatiya Janata Party-Janata Dal United-Lok Janshakti Party just about failed to complete a clean sweep of the 40 Lok Sabha seats in Bihar. The state witnessed a one-sided fight between BJP-led NDA and Mahagathbandhan in Lok Sabha election 2019 with the former winning 39 seats and the latter just one. The Mahagathbandhan comprising of the Rashtriya Janata Dal (RJD), Congress, Hindustani Awami Morcha, Rashtriya Lok Samta Party and Vikassheel Insaan Party failed to stop Narendra Modi from securing a landslide victory.

The BJP-JDU alliance emerged a clear winner in the state.

Here is the list of the successful candidates from Bihar in the Lok Sabha election 2019:
Live TV

Voting for general election 2019 took place in 7 phases with the last phase culminating on May 19.

There are total 542 seats in the Lok Sabha election 2019. A large number of voters came out to exercise their franchise during the polls and choose the 17th Lok Sabha of the nation.