Prime Minister Narendra Modi started his mega rally at Varanasi on Thursday, a day ahead of the filing of nomination papers from the Lok Sabha seat. 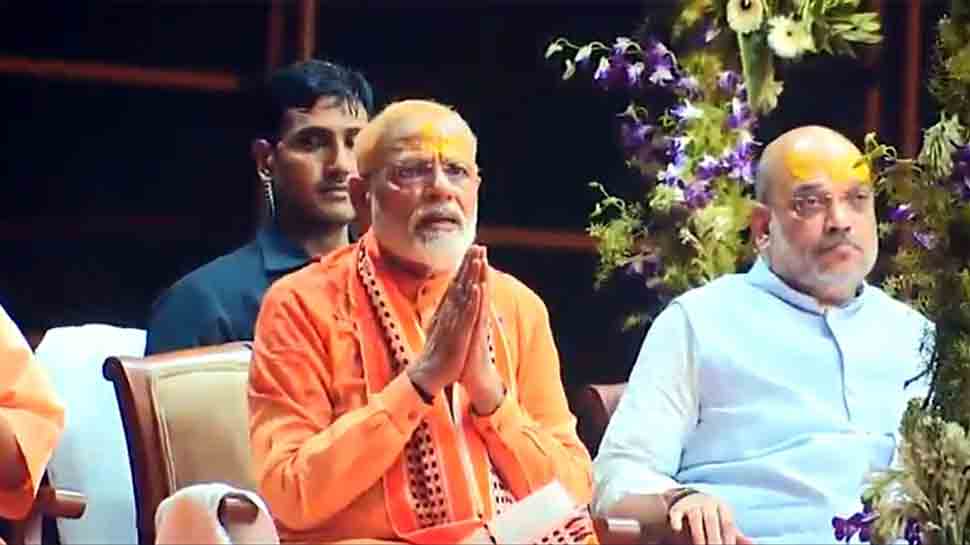 Prime Minister Narendra Modi held a grand roadshow in Varanasi, a day before he files the nomination papers from the Lok Sabha seat. The PM started his mega roadshow from the campus of the Benaras Hindu University by paying respects in front of a statue of Pandit Madan Mohan Malviya.

Here are all the election-related updates of April 25 (Thursday):

* Starting from Lanka, Modi’s roadshow will pass through Assi, Bhadini, Sonarpura, Madanpura, Jangambadi and Godowlia before culminating at Dashashwamedh Ghat, where he will take part in Ganga Aarti.

* Prime Minister Narendra Modi has begun his roadshow. He is greeting people. A sea of saffron can be seen around.

* After bumper rallies in Darbhanga and Banda, I am heading to beloved Kashi. There are a series of programmes lined up, which would give me another excellent opportunity to interact with my sisters and brothers of Kashi. Har Har Mahadev!

After bumper rallies in Darbhanga and Banda, I am heading to beloved Kashi.

There are a series of programmes lined up, which would give me another excellent opportunity to interact with my sisters and brothers of Kashi.

* Prime Minister Narendra Modi launched a veiled attack on the opposition RJD in Bihar remarking that with electricity having reached all corners of the state, the days of lantern poll symbol of Lalu Prasad's party were over.

* UP Chief Minister Yogi Adityanath alleges that Samajwadi Party had turned Azamgarh, which was once known in the field of education and literature, into a "stronghold of terrorism".

* Opposition has a long face after three phases of polling; they know the outcome: PM Narendra Modi in Banda.

* Amit Shah attacks Rahul Gandhi, Mayawati, Akhilesh Yadav, asked them if they are related to terrorists. "I don't underway why they got sad when Pakistan`s terrorists were killed. We belong to the BJP and Narendra Modi is our Prime Minister, we can`t do `ILU-ILU` with terrorists. Nobody can play with the security of this nation," he said.

* With just three days to go for the campaigning to end for the fourth and final phase of the Lok Sabha polls in Maharashtra, Prime Minister Narendra Modi and Congress chief Rahul Gandhi will address public meetings in Maharashtra on Friday.

* Prime Minister Narendra Modi on Thursday slammed the opposition for criticising ruling NDA for raking national security issue in election and asserted that rooting out terror is crucial to alleviation of poverty.

*  AAP releases election manifesto for the ongoing Lok Sabha elections. Making a poll promise, Kejriwal said if full statehood is granted to Delhi, 85 per cent reservation will be granted to students from the national capital for admission in colleges.

* Congress president Rahul Gandhi on Thursday accused Prime Minister Narendra Modi of doing "injustice" to the people of the country in the last five years, saying the 'acche din ayenge' slogan has now been replaced by 'chowkidar chor hai'.

* The Suheldev Bhartiya Samaj Party (SBSP) on Thursday alleged that the BJP was using the name and picture of its chief, Om Prakash Rajbhar, for campaigning in the general election.

* In order to ensure free and fair elections, the Election Commission of India on Thursday expressed that it is of the view that the Vivek Oberoi-starrer biopic `PM Narendra Modi` should not be released till May 19.

Kanhaiya Kumar, CPI LS candidate from Begusarai: I have full confidence that the people of Begusarai will vote on their issues and their issues are to build a university, a hospital, good roads, adequate water supply and fair price to farmers for their crops. pic.twitter.com/42FvpImgsG

* The Supreme Court Thursday refused to hear a petition seeking a ban on candidates contesting elections from more than one constituencies on an urgent basis but will take it up after two weeks. Read more

* Aam Aadmi Party (AAP) releases manifesto for Delhi. Delhi Chief Minister Arvind Kejriwal and Deputy Chief Minister Manish Sisodia releases manifesto. The party reiterates the demand for full statehood. CM Kejriwal accused the BJP of dividing the nation in the name of caste and religion. He said that Pakistan wants to divide India and the BJP is helping it. The CM said the party would do anything to stop PM Narendra Modi and Amit Shah from coming to power at the Centre. He added that Delhi has to be made a full state.

* PM Narendra Modi will address a rally in Uttar Pradesh's Ayodhya on May 1, 2019. This will be his first visit to Ayodhya after the 2014 election.

* Terrorism must be wiped out for the benefit of the poor people. Some people ask why I talk about terrorism? They say is it not even an issue: PM Modi.

* Dekhiye ye sab fused transformer hain, fused transformer se agar koi taar jodega to na to uska bulb jalega, na pankha chalega...na pani milega na hawa milegi. Fused transformer ki kya charcha karna? (These are all fused transformers. If you connect a wire with a fused transformer it'll neither light a bulb, nor turn on a fan. This will help in neither getting water. So there is no point in discussing it.): UP Minister Suresh Khanna on Mayawati to address a rally in Shahjahanpur.

* PM Modi is scheduled to meet 3,000 intellectuals of Varanasi in the evening. After the conclusion of the roadshow, PM Modi will hold dialogue with the intellectuals who have done exceptionally well in their field. Then PM Modi will talk to people from all section of society as part of his 'Mission All' program. This meeting will be held at the Hotel de Paris grounds.

* Before visiting Varanasi, PM Modi will address a rally in Bihar's Darbhanga at 10 am and in Uttar Pradesh's Banda at 1 pm.

* Congress President Rahul Gandhi will address three electoral gatherings in Rajasthan. He will organize a meeting at Ajmer at 11 am, in Jalore at 2 pm and at 4 pm in Kota.

* Interestingly, BJP president Amit Shah will also hold an election rally in Jalore at 2 pm and participate in a roadshow in support of BJP candidate Jogendra Singh Shekhawat in Jodhpur in the evening.

* Congress General Secretary Priyanka Gandhi will visit Bundelkhand. At 11 am she will do a roadshow in Jhansi and after the roadshow, she will hold a meeting in Gurusarai at 1.30 pm. Later, she will hold a public meeting at Urla in Jalaun at 3 pm.

* Uttar Pradesh's Banda will witness a tussle as Congress leader Hardik Patel will too hold a rally at Banda. He will hold a rally in Madhya Pradesh's Chitrakoot too.