Several leaders and political bigwigs will continue with their high-octave electioneering across the country and held election rallies and roadshows on Wednesday. 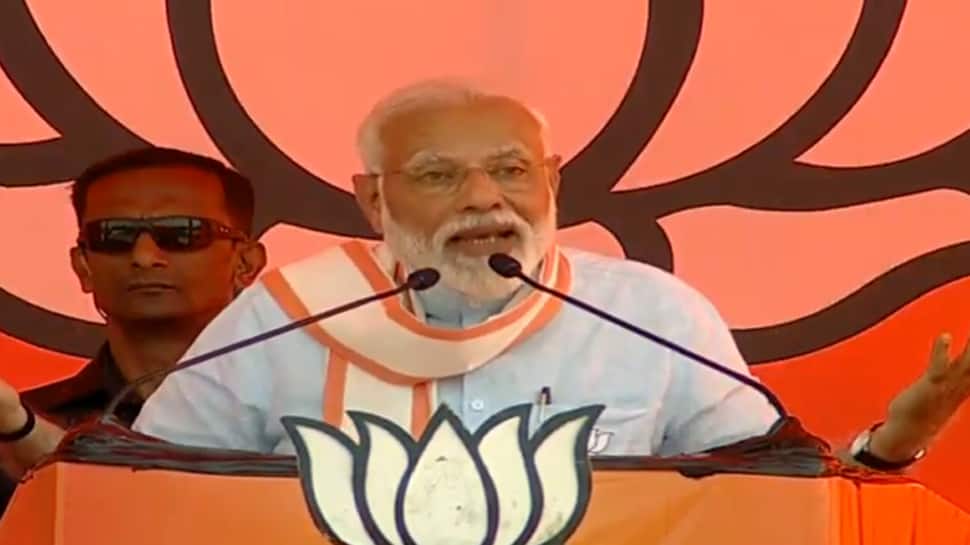 Several leaders and political bigwigs will continue with their high-octave electioneering across the country and held election rallies and roadshows on Wednesday.

For the sixth phase of the election, voting will be in Bihar, Jharkhand, Madhya Pradesh, Uttar Pradesh and West Bengal and also on all Lok Sabha constituencies in Haryana and Delhi.

Thanks for joining us. Please do come again on Thursday (May 9) for Lok Sabha live updates.

Here are the highlight on Lok Sabha election from May 8:

* The New India knows that the threat of terrorism still persists but they also feel assured that the New India no longer hesitates to go the origin of terror to hit them, in their homeland wherever they are: PM Modi

* I want to tell the people of our country about those who actually treated our Armed Forces as their personal property. Former PM Rajiv Gandhi took his in-laws and their family members from Italy to a personal holiday on Naval warship INS Viraat: PM Modi

*They gave strength to those who are against Punjab and supports Khalistan. They even went abroad and contacted the anti-national forces: PM Modi

* People of Delhi have been fooled by a bunch of 'Nakaampanthis' who had come on the promise of bringing new kind of politics but they have become synonymous with anarchy and obstructionism. Foul language and taking U-turns have become their identity: PM Modi

* Till now have witnessed four models of political traditions in the country-'Nampanti, Daam and daman panti, Bampanti, Vikas panti'. But only in Delhi, there is a fifth model called 'Nakampanti'. This means the one who rejects work related to Delhi's development and fail when they try to work. They spread anarchy in Delhi and betray the people.

* We have focussed on making the lives of the middle class in Delhi easier. Be it ensuring easier & cheaper housing, cheaper bills for mobile phones & medicines or exempting the income up to Rs 5 lakh per year from tax net, they have been at the core of our governance: PM

* After the construction of the eastern and western peripheral, the trucks reach their destination without taking the road from within Delhi, thus reducing pollution and traffic jam

* I am fortunate that you provided me with the opportunity to serve you. Before I give you an account of my work, I would like to extend my gratitude to every person in Delhi: PM Modi

* In the past five years, I have criss-crossed the city several times. My security contingent was always with me and I saw people waiting for me to pass. Each time I used to think about how people are running late because of me. This is not my habit and was never my intention: PM Modi

* Addressing a rally in Kurukshetra, Haryana, PM Narendra Modi alleged Congress of calling him a 'stupid prime minister'. He said that Congress compared him to Mussolini, Hitler, and Gaddafi. (READ FULL STORY HERE)

* Asserting that the BJP will be re-elected to power in the ongoing Lok Sabha elections, BJP chief Amit Shah Wednesday claimed that people in this country were divided by tastes and culture, but united by their chants in favour of Prime Minister Narendra Modi.

* Congress candidate Arvinder Singh Lovely released a manifesto for east Delhi constituency, saying he will work on basic issues like water shortage, pollution, unemployment and garbage pile up which have been "neglected" by the BJP and AAP.

* No party will get an absolute majority, Congress will stitch together strong 'UPA plus' alliance govt: Jyotiradiya Scindia to PTI.

* A BJP delegation approached the Election Commission (EC) on Wednesday to demand stringent action against those who attacked the convoy of Assam Minister Himanta Biswa Sarma and the party`s West Bengal unit President Dilip Ghosh.

* Speaking on the issue of police personnel allegedly wearing saffron scarves at Congress' Bhopal candidate Digvijaya Singh's rally, the DIG Bhopal said, "We and the organisers of the event had enrolled volunteers, and we have no say in as to what volunteers wear. No police personnel wore scarves of any colour."

* Police personnel in civil uniform were seen wearing saffron scarves at the roadshow of Computer Baba and Digvijay Singh, Singh is the Congress candidate from the Lok Sabha seat. A policewoman told that they had been "made to wear this".

* Amit Shah addresses a rally in Dhanbad, asks people to vote for BJP for the betterment of the country

* BJP and PM Narendra Modi have unnecessarily brought Rajiv Gandhi into the picture and "the people like me who have worked with him are very upset," said Indian Overseas Congress (IOC) chief Sam Pitroda

* The Supreme Court asked Election Commission to examine by tomorrow the plea of sacked BSF constable Tej Bahadur Yadav against the rejection of his nomination from Varanasi Lok Sabha constituency. Samajwadi Party had fielded Tej Bahadur as its candidate against Prime Minister Narendra Modi from Varanasi.

* Campaigning for Congress' Bathinda candidate Amrinder Singh Raja Warring, his wife Amrita Warring slammed sitting MP Harsimrat Kaur Badal for "doing nothing" for the constituency in a decade. She claimed that the contest for the high profile seat is a "one-sided" affair in favour of her husband.

* A young man from Amethi has sent a letter written in blood to the Election Commission seeking a directive for Prime Minister Narendra Modi to abstain from making objectionable comments that hurt the sentiments of the people.

Manoj Kashyap of Shahgarh in Amethi has written that he was `traumatised` by the statements of the Prime Minister against late Rajiv Gandhi.

* Sadhvi Pragya Singh Thakur, who is contesting as a BJP candidate from Bhopal, released her vision document in the presence of senior BJP leaders including former Madhya Pradesh CM Shivraj Singh Chouhan and State Incharge Vinay Sahastrabudhe at the party office in Bhopal.

* Rahul Gandhi's act of trashing the ordinance was the height of arrogance: Sushma Swaraj

#WATCH Sanjay Nirupam, Congress, in Varanasi: I feel that the person that people here have chosen- that Narendra Modi is actually the modern incarnation of Aurangzeb. (07.05.2019) pic.twitter.com/u6x0UsgU3D

* Amit Shah hits back at Priyanka Gandhi, says "the country will decide who is Duryodhana and who is Arjuna".

* Election Commission orders repolling in 168 polling stations in 26 assembly constituencies in Tripura, repolling to be held on May 12. Read full report

* Prime Minister Narendra Modi to address rallies in Delhi's Ramlila Maidan and Haryana's Fatehabad and Kurukshetra. Modi will address the rally at 7pm today. Union ministers Rajnath Singh and Sushma Swaraj are also expected to be present at the rally. The BJP has claimed that over 2 lakh people are expected to attend PM Modi's rally at the Ramlila Ground today.

* Congress president Rahul Gandhi to address the public in Bhind, Muraina and Gwalior in Rajasthan.

Rahul Gandhi's schedule for the day:

* BJP party president Amit Shah to hold a public meeting in Ujjain, roadshow in Bhopal in Madhya Pradesh. He will also address rallies in Dhanbad and Jamshedpur.