In the 2018 assembly election held in Telangana, the independent candidate Akula Hanmandloo campaigned with a slipper in one hand and a resignation letter in the other. 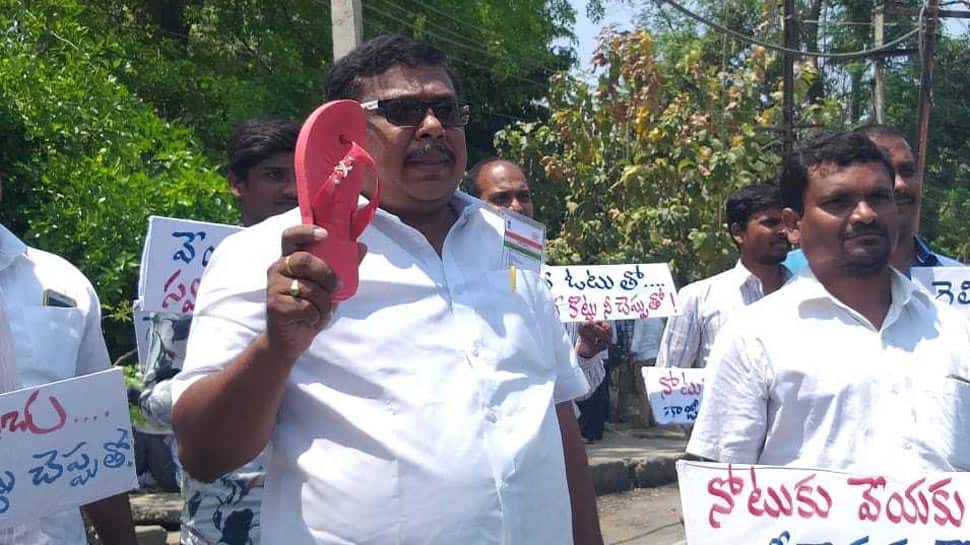 Hyderabad: In the 2018 assembly election held in Telangana, an independent candidate Akula Hanmandloo had caught attention with his unique campaign for Korutla assembly seat.

He campaigned with a slipper in one hand and a resignation letter in the other, urging the voters to hit him with slippers should he fail to deliver the promises made by him during the campaign and also send the resignation letter on his behalf, if they were not satisfied with his work to the assembly speaker.

However, Hanmandloo could get only 189 votes and hence, could not even retain his deposit but that has not deterred him from entering the fray once again.

This time, he has filed his nomination as an independent candidate for Nizamabad Lok Sabha constituency, from where Telangana Chief Minister K Chandrashekar Rao's daughter, K Kavitha, is a top contender.

"I am not disappointed that I could get only 189 votes in the recent assembly elections. In fact, I am convinced and determined that I should send my message against large-scale money usage by contestants. We all know huge sums of money will be spent in various forms to entice voters. I am going to urge people not to fall prey for money or freebies by candidates. Also, every candidate should be accountable to voters," Hanmandloo said.

In the assembly election 2018, he got a 'whistle' symbol, but now he expects his choice of a 'slipper' (footwear) symbol, if available, to be allotted to him by the Election Commission (EC) after his nomination is accepted.

"I have also applied for my own party registration,'' informs Hanmandloo, who plans to take up the 'slipper and resignation letter' campaign in the entire Nizamabad Lok Sabha constituency.

Akula Hanmandloo has ambitious plans and an interesting point to make to voters, but how many voters would support his idea would be known on the result day on May 23.