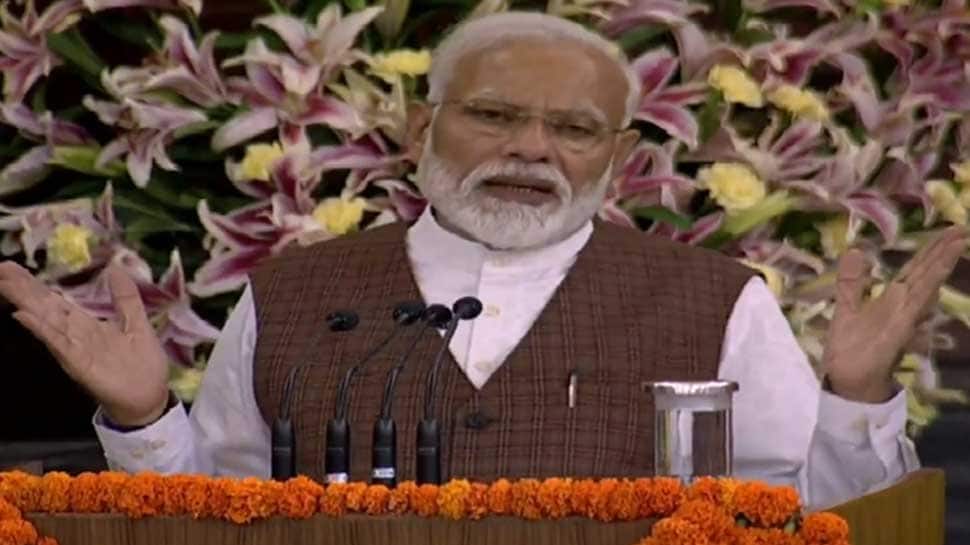 NEW DELHI: Two days after the BJP-led National Democratic Alliance's colossal victory in the 2019 Lok Sabha election, Prime Minister Narendra Modi on Saturday coined a new slogan "Nara" which meant "national ambition" and "regional aspiration" as he promised to take the country into a new era of development in the days to come.

The PM's new slogan 'NARA' is also indicative of the strategy which the BJP-led alliance is likely to adopt in the future in order to fulfill aspirations of people at the regional levels while pushing for an all-round, all-inclusive development at the national level.

"The NDA has energy, the NDA has synergy. The NDA has national ambition, the NDA has regional aspiration. Put the two together, and we become 'Nara'. We will move forward with this," PM Modi said while addressing a gathering of the NDA lawmakers in the Central Hall of Parliament after being unanimously elected as the leader of BJP-led NDA.

During his speech, the PM said that the NDA's victory showed that India has recognised it as ''a force of progress'', and it faces no credible opponent in the political arena today.

PM Modi continued by claiming that the NDA's victory showed that India was "maturing" as a democracy with each passing day.

"Not just in India but Indians around the world... it is amazing how they have involved themselves in the process. We are very proud, and I thank them," he said.

PM Modi assured that his government will now begin "a new journey to build a new India with new energy" and reached out to minorities, saying the ruling alliance has to win their trust and work without any discrimination.

In his nearly 75-minute speech, PM Modi said the massive mandate has multiplied responsibilities, and advised lawmakers on their public conduct, saying they should avoid speaking to the media for publicity and shun the "VIP culture".

PM Modi suggested the MPs that they should learn to work without any discrimination and win the trust of minorities that stood out as the alliance, especially the BJP, is often criticised for being indifferent to their concerns and not pursuing inclusive politics.

"Our mantra should be 'sabka saath, sabka vikas and sabka vishwas' (with all, for everybody's development and having everyone's trust)," he said in the speech which he began by bowing to the Constitution.

"They (minorities) cannot be handed over to them (Opposition), who benefit because we keep quiet," PM Modi said.

The PM also accused his political rivals of making minorities live in fear and exploiting them during elections as part of their vote-bank politics.

The PM said the poor were deceived all these years but his government managed to break through this "deception" and improved their lot and asked NDA MPs to similarly smash through the deception around minorities.

''It would be good if their education, social and economic standards are lifted up,'' he said, lamenting the minorities were used as vote bank by political parties.

PM Modi also cautioned the NDA MPs not to believe in rumours regarding names being considered for ministerial posts, saying ''it will be decided according to the norms.''

The Prime Minister concluded by saying that the NDA ended up breaking records set in the 2014 Lok Sabha elections only because of the people's trust in his governance. "The people have voted for pro-incumbency in such a manner for the first time. They have accepted us because of our work and what we have delivered. The number of votes that Donald Trump won (in the 2016 US presidential elections) was just the increment we received over the previous Lok Sabha election," he said, laughing.

The PM, along with a huge delegation of NDA leaders, later met President Ram Nath Kovind and handed him a letter of support from the NDA allies.

Exercising powers vested in him under Article 75 (1) of the Constitution of India, President Kovind appointed Narendra Modi to the office of Prime Minister and asked him to decide his Council of Ministers and other details like the date and place of his swearing-in.

The NDA notched 352 seats in the Lok Sabha elections, roaring past the halfway mark of 272 to form the next government. While the BJP emerged as the single-largest party with 303 seats, a hike of 21 over its 2014 tally, the Congress-led combine at the other end could manage just 91.