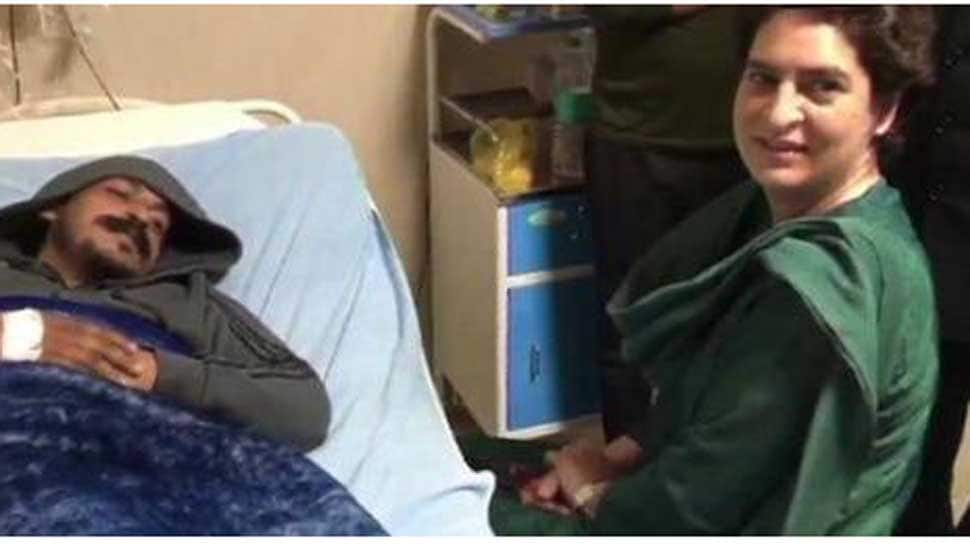 Congress general secretary for Eastern Uttar Pradesh Priyanka Gandhi Vadra on Wednesday met Bhim Army chief Chandrashekhar Azad at a hospital in Meerut, a day after the popular Dalit leader was arrested by the Uttar Pradesh Police for alleged violation of the model code of conduct.

Chandrashekhar Azad was taken in custody while he was leading a procession that included cars and motorcycles on Tuesday. The police said that Azad violated the model code of conduct by using more than the stipulated number of motorcycles. Hours after his detention, Azad fell ill and was admitted to Anand Hospital in Meerut.

Police said that Azad and some of his supporters were taken into custody when they were planning to take out a procession to Muzaffarnagar on motorcycles and other vehicles.

Talking to media after meeting Azad, Priyanka said that the media must not give any political connotation to the meeting.

"He is a young man who is struggling & raising his voice, but this govt is trying to suppress his voice. I am here because I like the energy & the way he raises voice for youth," Priyanka told ANI.

Priyanka lashed out the BJP government, saying it has become so arrogant that it wants to crush a young man.  The Congress leader said that her visit was not aimed at inducting Azad into the Congress. She added that Congress likes his enthusiasm and his willingness to raise voice on important issues.

Sources, however, claimed that by meeting Azad, Priyanka is trying to woo Dalit voters in Uttar Pradesh and make Azad a challenger against BSP, which had decided to keep Congress out of the SP-BSP alliance in Uttar Pradesh.

On Sunday, Azad had flagged off the “Hunkar rally”, which was supposed to end on March 15 at Jantar Mantar in Delhi. Azad, meanwhile, has announced that he will ensure that Prime Minister Narendra Modi faces defeat from Varanasi and will not hesitate from entering the fray himself if the SP-BSP alliance fails to field a strong candidate.