Naidu made these remarks while addressing an election rally in West Bengal's Kharagpur. 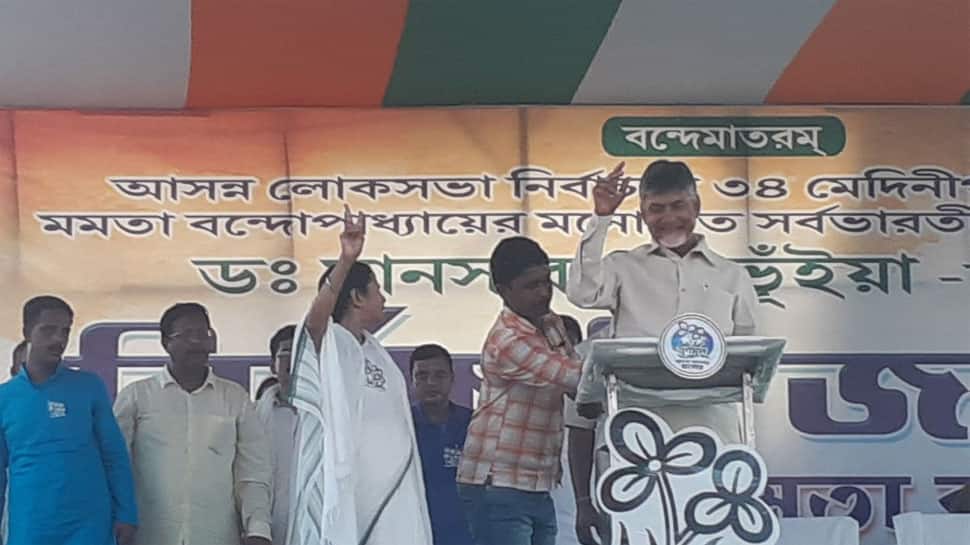 While addressing a rally in TMC bastion, the TDP chief called Mamata Banerjee as a 'Bengal tiger' as he sought votes for the ruling party in West Bengal.

"She is Bengal tiger, what Bengal thinks today, India will think tomorrow. So, please vote for Mamata Banerjee,'' the TDP chief appealed to voters.

Naidu made these remarks while addressing an election rally in West Bengal's Kharagpur.

Naidu, who is on the forefront of building a powerful anti-BJP coalition with like-minded parties in a bid to defeat the Narendra Modi-powered NDA, has held crucial discussions with top leaders of the Congress, SP, RJD, TMC and AAP in the recent past.

He has even called for a big meeting of top opposition parties two days ahead of the announcement of Lok Sabha election 2019 results to chalk out a strategy to counter the BJP-led NDA.

Naidu is also due to address election rallies along with West Bengal Chief Minister and Trinamool Congress leader Mamata Banerjee in several parts of the state.

Naidu had left Delhi on Wednesday for Kolkata.

He had addressed election meetings in Jhargram and Haldia on Wednesday and is campaigning for Trinamool candidates in Kharagpur today.

Similarly, Banerjee had addressed an election rally of the TDP in Visakhapatnam last month.

Elections to 175-member Andhra Pradesh Assembly and all 25 Lok Sabha seats in the state were held in the first phase on April 10.

After the elections in his state, Naidu had campaigned Janata Dal-Secular in Karnataka by addressing a few meetings with party chief and former Prime Minister HD Deve Gowda and Chief Minister HD Kumaraswamy.

From veterans to first-timers, Delhi candidates seek to harness maximum out of social media