The Supreme Court (SC) on Monday heard a petition against Maharashtra Governor's decision to revoke President's rule in the state and anoint Fadnavis as CM and Pawar his deputy respectively. The court on Sunday issued notices to the Centre, Fadnavis and Ajit Pawar on petitions filed by Shiv Sena-Congress-NCP combine. The apex court reserved its verdict for Tuesday at 10.30 am. 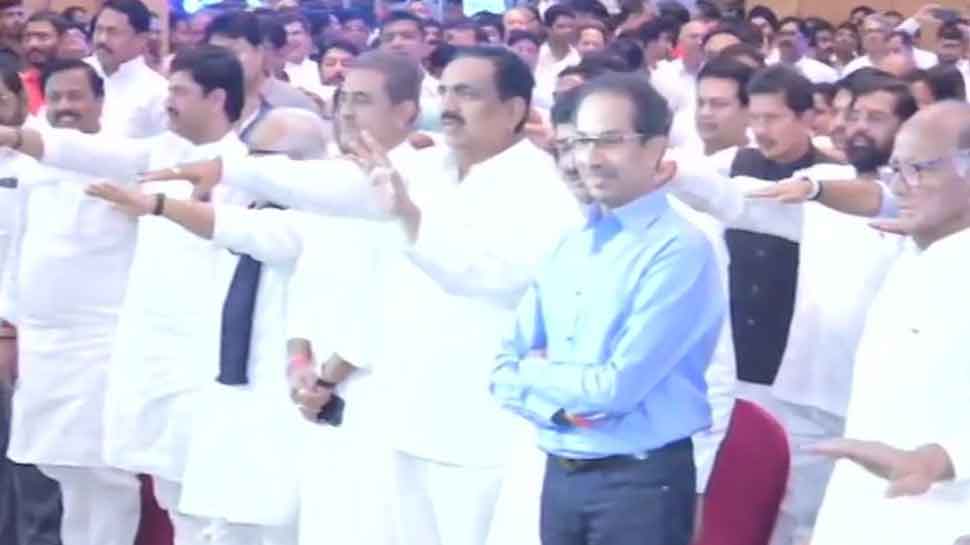 In a massive turn of events, BJP's Devendra Fadnavis has been sworn-in as the Chief Minister of Maharashtra and NCP's Ajit Pawar as Deputy CM, after a month-long drama in Maharashtra politics. The development came after all the parties in the state--BJP, Congress, NCP, and Shiv Sena, were given a chance by Governor Bhagat Singh Koshyari to form the government, failing which President Rule was imposed. on Saturday morning

The Supreme Court (SC) on Monday heard a petition against Maharashtra Governor's decision to revoke President's rule in the state and anoint Fadnavis as CM and Pawar his deputy respectively. The court on Sunday issued notices to the Centre, Fadnavis and Ajit Pawar on petitions filed by Shiv Sena-Congress-NCP combine. The apex court reserved its verdict for Tuesday at 10.30 am.

After oath-taking, Ajit Pawar claimed that he has the support of a few other NCP MLAs, all of them believed to be with him was present at the party meet with Sharad Pawar on Sunday evening. The BJP won 105 seats in the 288-member assembly followed by Shiv Sena 56, NCP 54 and Congress 44.

NCP's Nawab Malik, said, ''BJP still has a chance to save its honour. Ajit Pawar is a part of our party, he is part of the Pawar family. We are trying that he comes back to NCP & admits his mistake.''

BJP leader Ashish Shelar, after the Shiv Sena-NCP-Congress MLAs parade, said, ''Identification parade is done in case of accused persons, not in case of elected MLAs. It is an insult to the MLAs and the people who elected them.''

NCP leader Jayant Patil, said, '' I am confident that in the floor test, all these 162 MLAs will vote against the present government of Maharashtra. Then, a new government will be formed.''

Shiv Sena-NCP-Congress MLAs took a pledge, saying "I swear that under the leadership of Sharad Pawar, Uddhav Thackeray and Sonia Gandhi, I will be honest to my party. I won't get lured by anything. I will not do anything which will benefit BJP."

MLAs of Shiv Sena-NCP-Congress thronged at Hotel Grand Hyatt, took an oath to stand together.

NCP Chief Sharad Pawar assured MLAs, ''There will not be any problem in proving our majority. The one who is suspended from the party cannot give any orders. On the day of floor test, I will bring more than 162 MLAs. This is not Goa, this is Maharashtra.''

NCP chief Sharad Pawar told MLAs at Hotel Grand Hyatt, "We are here together for people of Maharashtra. A government was formed in state without majority. Karnataka, Goa, & Manipur, BJP didn't have a majority anywhere but formed government.'' He added, '' This alliance is in favour of Maharashtra,'' while criticising the BJP.

Shiv Sena's Uddhav Thackeray told MLAs, ''Our fight is not just for power, our fight is for 'Satyamev Jayate.' The more you try to break us, the more we will unite.'' 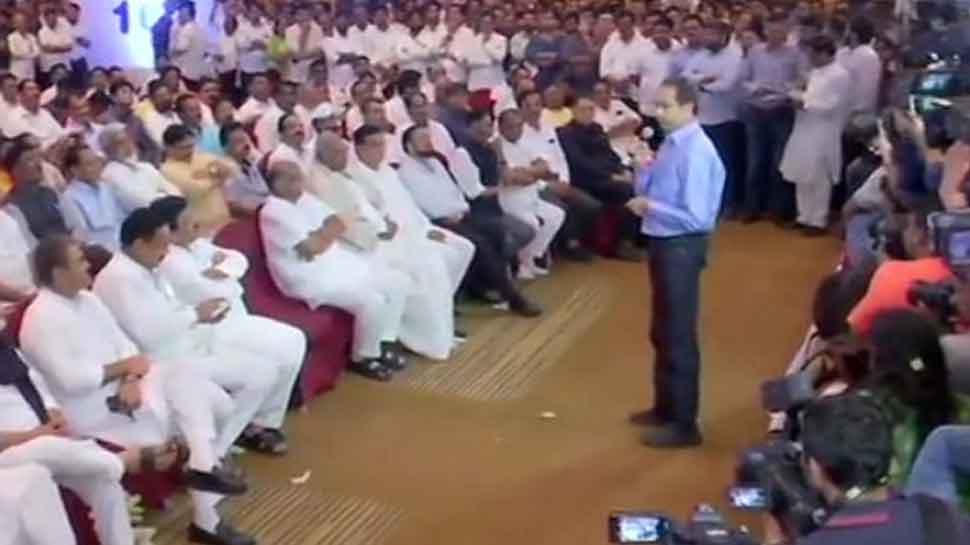 Congress leader Ashok Chavan in his address to the assembled MLAs in Hotel Grand Hyatt, said, "We are more than 162, not just 162. We all will be a part of the government. I thank Sonia Gandhi who allowed for this alliance to stop BJP. Governor should invite us to form the govt."

'Long live Maha Vikas Aghadi' slogans raised at the hall in Hotel Grand Hyatt where the MLAs of Shiv Sena-NCP-Congress have assembled.

Congress leaders including Mallikarjun Kharge and Ashok Chavan arrive at Hotel Grand Hyatt where Shiv Sena-NCP-Congress MLAs have assembled for the parade. 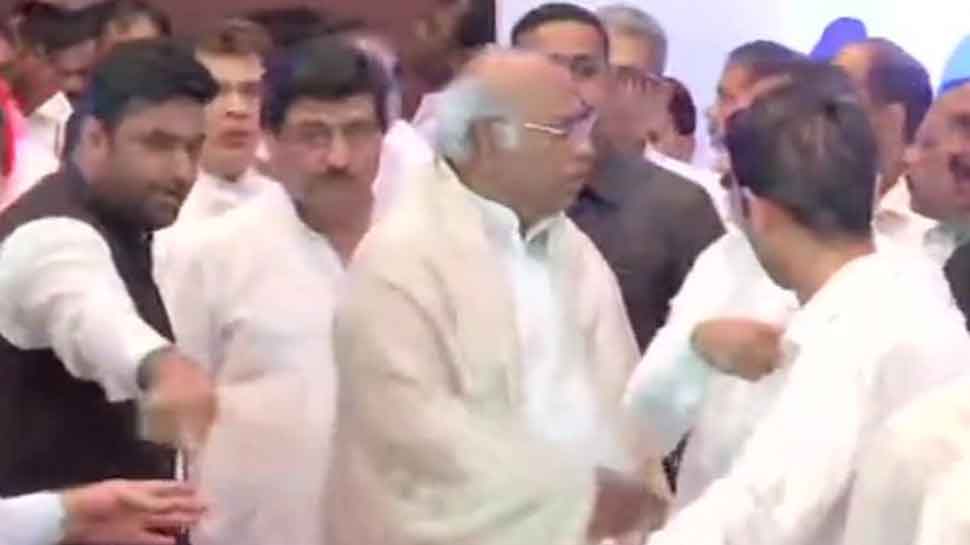 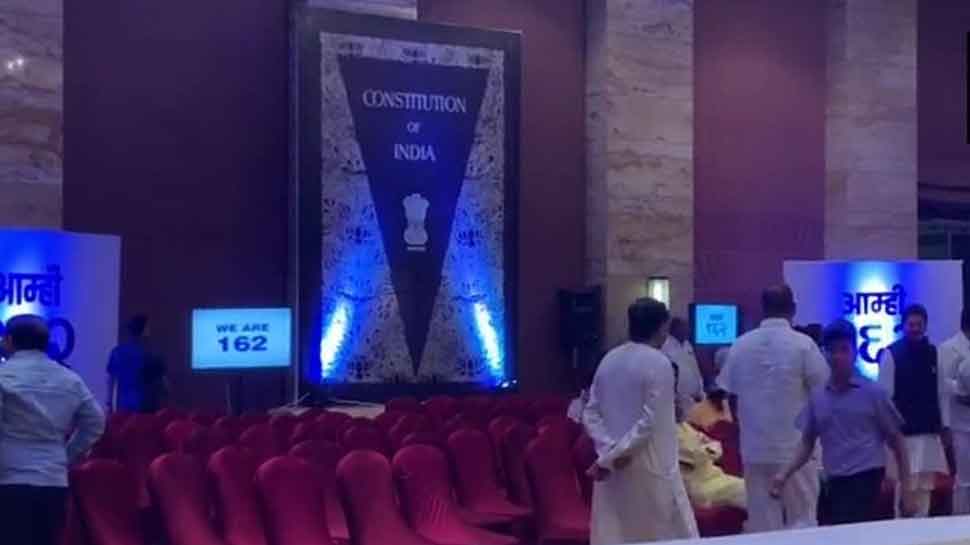 Congress leader Ahmed Patel to hold a meeting with all the opposition parties to bring a mutual solution to the ongoing political scenario in Maharashtra. 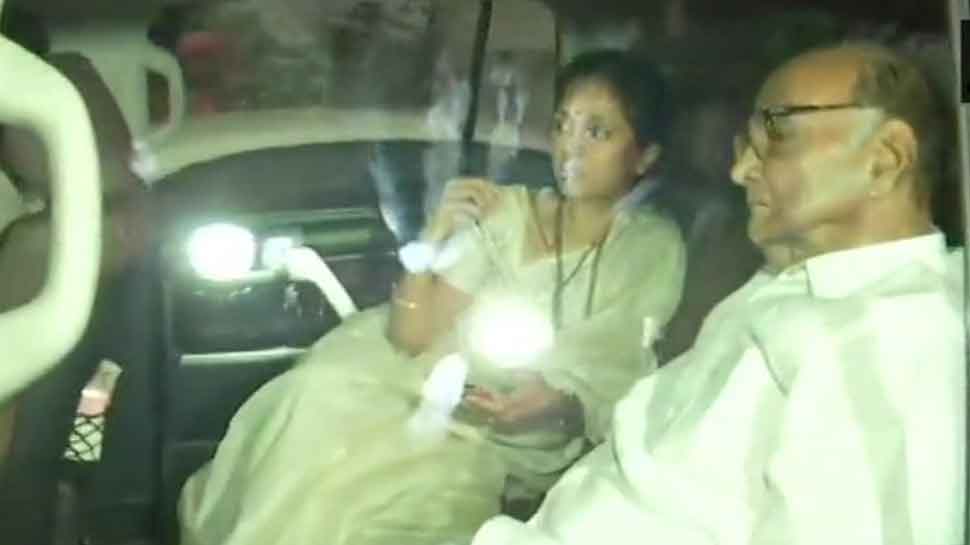 Congress and its allies to boycott the Constitution Day program, on November 26.

Shiv Sena leaders Uddhav Thackeray and Aditya Thackeray to be present during the MLAs parade at Hotel Grand Hyatt, Mumbai.

162 MLAs of Shiv Sena-NCP-Congress to cite their names and constituencies during the parade at Hotel Grand Hyatt, Mumbai.

Shiv Sena leader Sanjay Raut tags Maharashtra governor in his tweet, asking him to come and watch all the 162 MLAs together at Grand Hayat at 7 pm.

We are all one and together , watch our 162 together for the first time at grand Hyatt at 7 pm , come and watch yourself @maha_governor pic.twitter.com/hUSS4KoS7B

BJP leader Raosaheb Patil Danve, said, ''There is no 'Operation Lotus', we have enough MLAs for the majority, we are not threatening any MLA. He denied all the allegations of Sanjay Raut and said, '' His allegations are false, after a few days he will have to be sent to a mental hospital.''

Senior Congress leader Salman Khurshid slams BJP on Maharashtra government formation and said, '' Let Supreme Court take its time and we hope it will come up with some valid solution tomorrow (November 25). Whatever is happening in Maharashtra is wrong for a democratic country like India. BJP has a strong government in the centre still they are playing political games in Maharashtra.''

According to highly placed sources in Maharashtra Anti Corruption Bureau (ACB), Deputy CM Ajit Pawar has been given clean chit in nine corruption cases. However, none of these belongs to the alleged irrigation case. The sources added that the cases that were closed today were conditional and can reopen if more information comes to light or courts order further inquiry, said an ANI report.

Congress party under the leadership of  Sonia Gandhi to stage a protest near Mahatma Gandhi statue, on Tuesday (November 25) at 10 am. 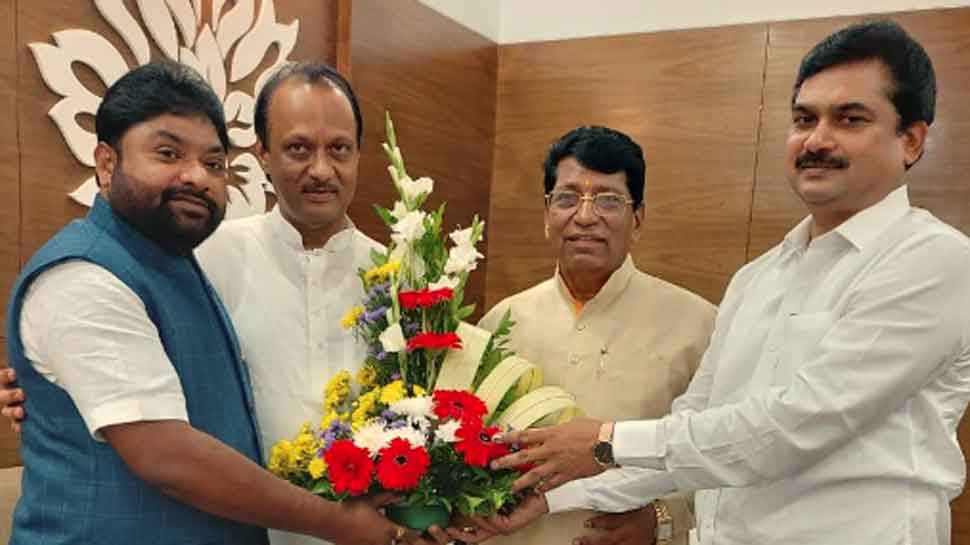 Maharashtra Chief Minister Devendra Fadnavis met his Deputy, Ajit Pawar, at the former`s residence to discuss various measures for additional support and assistance for farmers affected by unseasonal rain in the state. In a tweet, the Chief Minister`s Office (CMO) said that further discussions will be held with the state Chief Secretary and Finance Secretary. "Chief Minister Devendra Fadnavis and Deputy Chief Minister Ajit Pawar today met and discussed on various measures for additional support and assistance to unseasonal rain affected farmers. Tomorrow it will be further discussed with the Chief Secretary and Finance Secretary," the CMO tweeted.

BJP MLA Ashish Shelar said that in order to `mislead` the people of Maharashtra, Congress, NCP and Shiv Sena have submitted a letter to the Governor, claiming to form a government in the state. "Via the medium of television, we got to know that Congress, NCP and Shiv Sena have claimed to form the government at Raj Bhavan today. The letter submitted by these parties is nothing but a way to mislead the people of Maharashtra," said Shelar. "Today these parties (Shiv Sena, Congress and NCP) did not mention that in whose leadership are they going to or they want to form the government. They haven`t even decided about that. That`s a letter of cheating and fraud," he added."

Rashtriya Janata-Dal (RJD) leader Tejaswi Yadav attacked the BJP over the political crisis in Maharashtra and said it was playing the same game as it had in Bihar. "Just like Bihar Chief Minister Nitish Kumar and BJP had played the game in Bihar, the party is doing the same in Maharashtra now. It is a complete murder of democracy and disrespects the people`s mandate in Maharashtra," Yadav told ANI. He further emphasised that a floor test for the new government should be held immediately. "When everyone knew that the opposition, i.e. Shiv Sena, NCP and Congress were going to form the government and had almost chosen their chief ministerial candidate, then why did BJP`s Devendra Fadnavis take the oath in a rush," he added.

Anil Patil, NCP MLA who was reportedly missing & brought to Mumbai from Delhi by NCP leaders said, "When we reached hotel (in Delhi) at least 100-200 BJP workers were present there along with a lot of police cars & personnel in civil dress, we were scared. We told Sharad Pawar sa'ab that we want to return & stay with the party, he assured us that we will be brought back and made the necessary arrangements."

Mumbai: Shiv Sena MLAs have been brought to Hotel Lemon Tree, from Lalit Hotel where they were earlier lodged. #Maharashtra pic.twitter.com/qdlfysYotI

BJP-Shiv Sena got mandate to form govt with Devendra Fadnavis as CM. It's the Congress that is murdering democracy and questioning us on the same. BJP's win in state is both moral & political victory, which Congress is trying to hijack: Union Minister Ravi Shankar Prasad

Maharastra CM Devendra Fadnavis’ first signature of this tenure was done on a Chief Minister Relief Fund cheque, on reaching ministry, which was handed over to Kusum Vengurlekar. 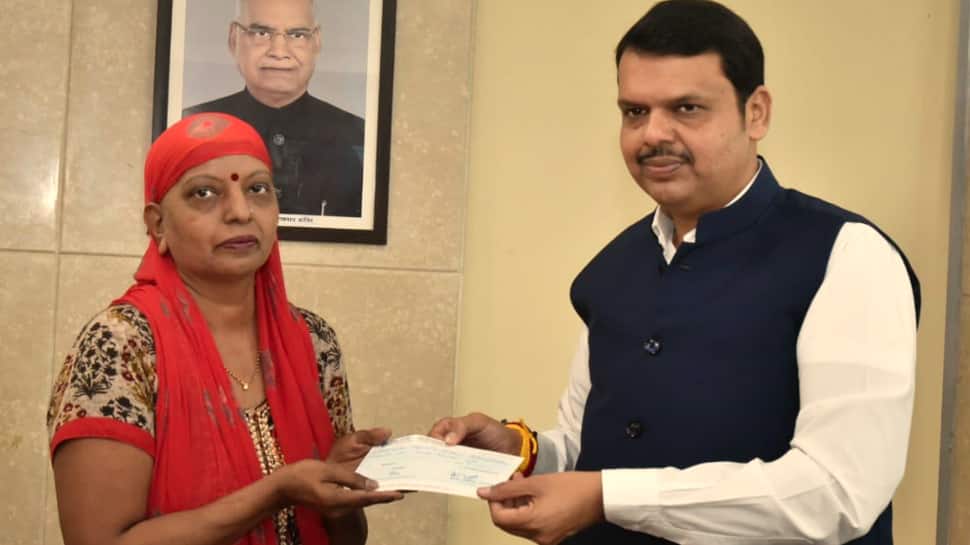 "There were talks between Shiv Sena and NCP for the post of the CM for two and a half years each. We had demanded the CM post for two-and-a-half-years but an agreement wasn't reached," said Sharad Pawar in Karad of Satara district.

We've given the letter of support of 162 MLAs to Governor. In democracy, only the majority number holds importance. We want that the minority govt formed on November 23, should resign as they can't prove majority. Those with the majority should be given opportunity: Shiv Sena's Eknath Shinde.

Meeting continue between Ajit Pawar, and Chhagan Bhujbal, Sunil Tatkare, Dilip Valse Patil at Vidhan Bhawan to pursue him to come back to NCP.

The strength wise distribution of 162 MLAs:

NCP's Jayant Patil said, "Today morning at 10 am, Shinde ji, Thorat ji, Chavan ji, Vinayak Raut ji, Azmi ji, KC Padvi and I - on behalf of NCP, gave a letter to Governor showing strength of 162 MLAs. The current government in Maharashtra has been formed on the basis of false papers and documents."

There is a possibility of sending Shiv Sena MLAs from Lalit Hotel to another hotel, Hotel Lemon Tree and two luxury buses have been arranged for it, according to sources.

After hearing both sides, the Supreme Court reserved its order on Maharashtra floor test for Tuesday (November 26) at 10.30 am.

"The "how" of the floor test is important here. Regardless of the party, the Senior most member of the House should be appointed Protem Speaker. Floor test should be held immediately thereafter. "Immediately" is important! It is for the purpose to preserve the purity of democracy that every order passed by the Supreme Court in the past has held that floor test to be held within 24 hours" added Singvi.

Leaders of Congress, NCP and Shiv Sena arrived at the Raj Bhavan and the leaders of the three parties submitted to the officials letter of MLAs supporting their alliance. Following this, state Congress spokesperson Sachin Sawant tweeted, "The @INCMaharashtra, @ShivSena and @NCPspeaks delegation with their respective leaders have called on Governor at Rajbhavan to register its claim to form the govt in future as the incumbent govt is definitely going to fall. State must not get President`s Rule again."

Abhishek Manu Singhvi appearing for NCP said, "Today there is a peculiar case before your lordships that both sides agree that there should be a floor test. The question is a narrow one - As to when the floor test should be held? There was a list of signatures (of 54 NCP MLAs), but did it say that the MLAs were agreeing to support the BJP. There can be signatures without a covering letter. This is a murder of democracy!"

Solicitor General Tushar Mehta, for Maharashtra Governor, said, "Grant us 2-3 days' time and let us file a reply. The Governor has in absolute discretion invited the largest party on November 23."