Prime Minister Narendra Modi on Saturday sent a warning to 'corrupt people' of the country saying their problems are set to rise in the coming days. 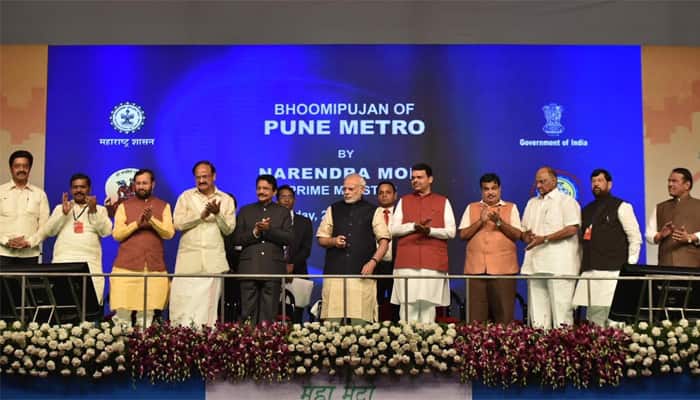 Mumbai: Prime Minister Narendra Modi on Saturday sent a warning to 'corrupt people' of the country saying their problems are set to rise in the coming days.

Once again, in an scathing attack on those following the path of corruption, PM Modi said that the demonetisation move was only one of the many intended radical reforms to cleanse India of corruption and black money and make the country developed in one generation.

"After 8th November, the power of the 'big' people has reduced and the power of the poor and those perceived as 'small' has increased. There is time...follow the law. Return what belongs to the poor. There is no way to escape now. In this nation, the voice of 125 crore Indians will be heard. This voice cannot be subverted by a select few. I am not saying this for the sake of saying...I have started this battle with great courage," PM Modi said today as he laid the foundation stone ceremony of Pune Metro project (Phase 1) worth Rs 11,400 crore.

Asserting that India is urbanising at a very quick pace, the Prime Minister said, "It is essential to work in two directions. First is to improve quality of life in villages and on the other hand, we need to think long term so that we can mitigate the challenges our urban areas are facing. The Government of India is actively working on the Rurban Mission. This caters to those places that are growing and urbanising quickly."

Prime Minister Modi said one must plan for the future as everything cannot be seen from a political point of view.

"We must plan adequately for growth of our cities. The character and spirit of the village has to be preserved and at the same time we need to invigorate our villages with good facilities. The gains of the present are vital but we need systems that cater to the needs and aspirations of the future too," he added.

Prime Minister Modi further said that after November 8, the urban local bodies have seen a rise in their income.

"This makes it possible to spend more resources of development. In this nation, everybody is equal before the law and everyone has to follow the law. If the evils of corruption and black money were removed earlier, I would not have had to take the decisions I took. The people who have the means, tend to break the law. But we have ensured that even they stand in queues," he said.

"Development is the only solution to all problems.It is the way ahead" PM @narendramodi at public function in #Mumbai pic.twitter.com/7zaEsfFgBl

Modi also performed 'bhoomipujan' (land worship) for a memorial to Maharashtra icon Chhatrapati Shivaji in the Arabian sea. Shiv Sena chief Uddhav Thackeray joined Modi for the foundation-laying ceremony which was followed by a public rally.

Speaking at the public rally, and virtually kicking off the BJP’s campaign for Mumbai local body elections, Modi said development was the only solution to all problems. He pointed out that it was rare that development projects worth more than Rs1.06 trillion had been inaugurated in one go for Mumbai.

Modi also used the stage to reiterate his message against "corruption, fake currency, and black money". He thanked the people of Maharashtra for supporting the BJP in the recent municipal polls, saying that it was a vote for demonetisation.

"The fight against corruption and black money has now become the fight by the people against these handful of corrupt people. Demonetisation has changed the temper of the people and the corrupt must take note. This fight will not stop. It will continue till we win it," Modi said after inaugurating the Shivaji memorial in Mumbai.

It is to be noted that Mumbai civic polls are just two months away and PM Modi's presence in the city today is likely to provide a big boost to the Bharatiya Janata Party’s campaign for the same.

Some of the major infrastructure projects in Mumbai for which Modi laid the foundation stone on Saturday include the Mumbai Trans Harbour Link, a 22-km-long six-lane road project worth Rs 17,843 crore to connect Mumbai with Navi Mumbai across the creek; Metro II, a 23-km-long corridor between D.N. Nagar and Mankhurd worth Rs 14,549 crore; Metro IV corridor, a 33-km-long elevated track between Wadala and Thane worth Rs 10,986 crore; and third phase of Mumbai Urban Transport Project worth Rs 11,000 crore.

Extending Ease of Travelling in Mumbai:Plan for Rail Projects worth more than 56000 cr for strengthening transport #Promiseinmotion pic.twitter.com/wrO3WH9SsI

The Shivsmarak, or the Shivaji Memorial to be constructed off the Mumbai coast, will cost the state exchequer Rs 3,600 crore.

The Rs 17,843-crore project, for which multiple consortia have shown interest, will connect Sewri in central-east Mumbai with Nhava Sheva across the harbour which is close to the nation's largest container port JNPT.

To be completed by 2019, MTHL will also help increase connectivity to the proposed Navi Mumbai international airport.

Modi also laid the foundation stones of two new metro projects -- the 23.5-km DN Nagar-Bandra-Mankhurd Metro-2B corridor and the 32-km Wadala-Ghatkopar-Thane-Kasarvadavli Metro-4 corridor-- through a remote control at the event.

The two metro lines, part of a plan to have a 200-km metro network across the Mumbai metropolitan area cutting through densely populated suburbs serving as feeders for the island city, will be built at an investment of Rs 10,986 crore and Rs 14,549 crore, respectively.

Both the metros will run 6-coach trains and is expected to carry 1,800 commuters per trip each.

The Mumbai Metropolitan Region Development Authority is aiming to reduce the overcrowding in suburban local trains run through these metro projects and also reducing the vehicular traffic woes.

The Prime Minister also laid the foundation stone for multiple works to be carried out as part of the third phase of the Mumbai Urban Transport Project with an investment of Rs 52,000 crore across the megapolis.

Modi also inaugurated a new campus of the National Institute of Securities Markets in Panvel earlier in the day.

PM @narendramodi at the inauguration of new Campus of National Institute of Securities Markets (NISM) at Patalganga in Mumbai pic.twitter.com/tu4UoxxZQ1

After inaugurating the new campus of National Institute of Securities Markets in Raigad, PM Narendra spoke to the audience gathered there and enumerated the achievements of the NDA government as well as explained what that meant for India, especially its youth. "Constitutional amendments on GST that remained pending for years has been passed and the long awaited GST will soon be a reality," PM Modi said.

In the wake of the demonetisation drive, PM Modi also addressed the criticism he has faced over the order and said that he will not take any decision with political gain in mind.