The proposed new alliance of the Sharad Pawar-led NCP, Congress and the Shiv Sena will be called 'Maha Vikas Aghadi' which now looks set to form the next government in Maharashtra ending days of political stalemate in the state. 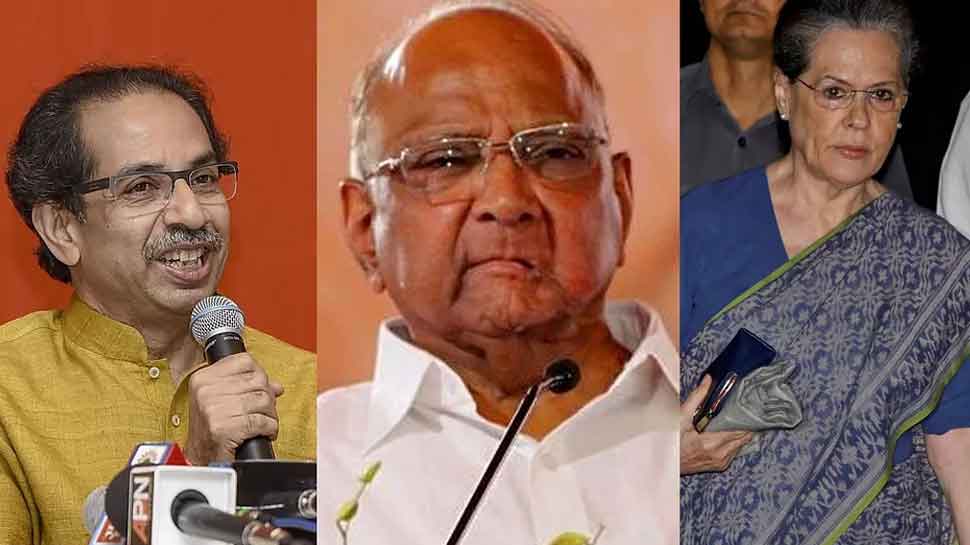 MUMBAI: The proposed new alliance of the Sharad Pawar-led NCP, Congress and the Shiv Sena will be called 'Maha Vikas Aghadi' which now looks set to form the next government in Maharashtra, ending days of political stalemate in the state.

According to Zee Media sources, as per the deal finalised by the three parties, Shiv Sena will keep the chief minister's post for a full five-year term, while the two alliance partners - NCP and Congress - will have one deputy chief minister each.

The decision on picking the party's deputy chief minister candidate will be taken by interim Congress president.

There will be no compromise on the common minimum programme (CMP) agreed by the three parties for running the coalition government in the state, said sources.

The Congress Working Committee, which met on Thursday, has granted in-principle approval to the party to form government in Maharashtra along with the NCP and the Shiv Sena, sources said.

In the meeting, which was chaired by Congress president Sonia Gandhi at her 10, Janpath residence, the party's highest decision-making body deliberated on the Maharashtra political scenario, the sources said.

After the meeting, Congress general secretary KC Venugopal told the media that the Congress Working Committee was briefed on the party's discussions with the Nationalist Congress Party yesterday.

The discussion with NCP will continue and a final decision on forming an alliance with Shiv Sena will be taken on Friday, he added.

The leaders of the three parties are most likely to meet the state's Governor Bhagat Singh Koshyari on Saturday if things go as per plan.

Meanwhile, the Shiv Sena has also agreed to drop its ''Hindutva'' agenda to become a 'secular' party - a key demand of the Congress for forming an alliance in Maharashtra along with NCP.

Uddhav Thackeray's party, which has been pushing forward its Hindutva agenda and had supported the ruling BJP on various issues like Ram temple, Article 370, Triple talaq, etc, has reportedly agreed to drop all controversial issues.

Though the names of the cabinet members are being discussed before the government formation, it has been reported that ​NCP leaders Jayant Patil, Nawab Malik, Hasan Mushrif, Anil Deshmukh, Dhananjay Munde, Chagan Bhujbal, Ajit Pawar, Dilip Vasel Patil, Makrad Patil, Rajesh Tope will most likely be inducted into the new Maharashtra cabinet.

Shiv Sena has also asked its MLAs to carry with them their official identification documents while coming for a key meeting of the party on Friday, according to the sources.

The meeting has been convened at 'Matoshree', the family residence of party chief Uddhav Thackeray in suburban Bandra, they said.

The direction for bringing IDs has been given to deal with a situation where the MLAs are required to be presented before Maharashtra Governor Bhagat Singh Koshyari, he said.

Around 3 pm today, a meeting of NCP leaders will take place at Sharad Pawar's residence to discuss the Maharashtra government formation. The NCP leaders are also likely to met their Congress counterparts and will eventually hold talks with Shiv Sena leaders over portfolio allocation.