Stray dogs in Mumbai turn blue, thanks to industrial waste

Stray dogs in Navi Mumbai’s Taloja industrial area are turning bright blue in colour. Thanks to the untreated industrial waste that are being released into the Kasadi River. 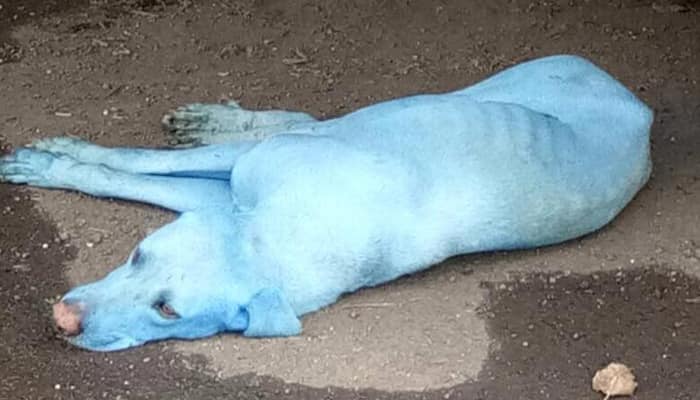 New Delhi: Stray dogs in Navi Mumbai’s Taloja industrial area are turning bright blue in colour. Thanks to the untreated industrial waste that are being released into the Kasadi River.

These stray dogs are often found wading into the river water containing industrial waste over a period of time.

As per the Central Pollution Control Board guidelines, the biochemical oxygen demand (BOD) levels — the concentration of oxygen required to sustain aquatic life – above 6 mg/L can cause death to fish while levels above 3 mg/L make it unhealthy for human consumption.

A water quality test at Navi Mumbai Municipal Corporation revealed that the BOD level in Kasadi River is a staggering 80 milligram a litre (mg/L), reported the Hindustan Times. Levels of chloride, which is toxic, harms vegetation, aquatic life and wildlife, were also high.

Several industries are located in the Navi Mumbai Industrial area which includes nearly 1,000 pharmaceutical, food and engineering factories. Reportedly, the industrial waste ejecting out of the factories increased the pollution levels by 13 times the safe limits in the Kasadi River.

Based on a study conducted in 2016, Yogesh Pagade, a member of a local fishing community, said, "After numerous complaints to MPCB over the years, only the stench at Kasadi has reduced. However, the pollution levels continue to be extremely high and dissolved oxygen is negligible."

The Navi Mumbai Animal Protection Cell on Wednesday clicked photographs of a dog whose fur had turned blue. It registered a complaint with the Maharashtra Pollution Control Board (MPCB) on Thursday.

According to MPCB, the direct release of dyes from the factories into the river water has led to the strays turning blue.

A local resident Arati Chauhan, who runs the animal protection cell, said, "It was shocking to see how the dog’s white fur had turned completely blue. We have spotted almost five such dogs here and have asked the pollution control board to act against such industries."

"Allowing the discharge of dye into any water body is illegal. We will take action against the polluters as they are destroying the environment," said Anil Mohekar, regional officer, MPCB, Navi Mumbai. He added, "We have directed our sub-regional officer to investigate."

Following a survey conducted by the MPCB officials on Friday, a private company was found using blue dye for various purposes such as making detergent. "The area is already cordoned off to the public and is in close proximity of the private company. However, five to six dogs entered the site looking for food and got the blue colour on them.

"We have warned the company owners to ensure no animals can enter again and such an incident should not be repeated," said Jayavant Hajare, sub-regional officer, MPCB Navi Mumbai.

He further added that the factory has been asked to do away with the dye instantly. "We have given the company seven days to clear the pollutants from the site. If it is not removed then we will issue a notice," he said.