An ASDMA official said the flood have inundated large areas in several districts. 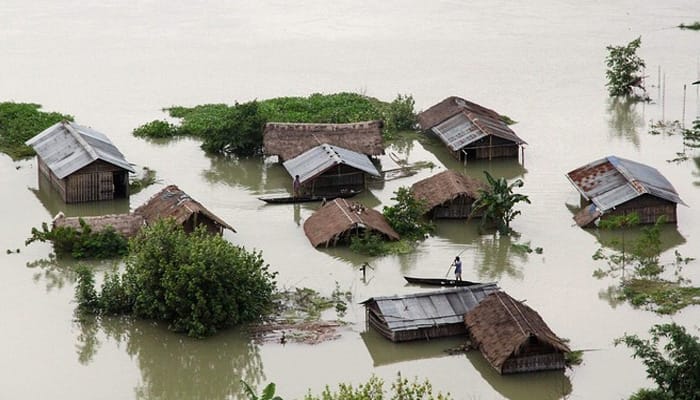 Guwahati: The overall flood situation continued to be grim in Assam with over six lakh people affected across 14 districts till Sunday evening while one person died in Lakhimpur on Sunday taking flood-related death toll to seven this year.

"As on today (Sunday), 6,41,043 people in 1,206 villages in the 14 districts remained affected due to the current flash of floods. The concerned district administrations have opened 81 relief camps in the flood hit districts housing 21,931 marooned people," an ASDMA official said.

Sources in the Inland Water Resources (IWR) department said that the ferry services between Dhala to Sadiya, and Neematighat to Majuli have been suspended due to increasing water level of Brhamaputra river at many places.

Officials of the Central Water Commission said that while the Brahmaputra river is flowing above danger level at Dibrugarh, Neematighat, Tezpur, Golapara and Dhubri, some of the tributaries of the Brahmaputra are also showing increasing trend. The Burhidehing, Subansiri and Dhansiri rivers are flowing above danger levels at Khowang (Dibrugarh), Bedetighat (Lakhimpur) and at Numaligarh (Golaghat) district respectively.

While the flood waters have inundated the Dibru-Chaikhowa national park in Tinsukia district, Pabitora wildlife sanctuary and Kaziranga national park have also been partially affected due to the flood.

The flood waters have also damaged houses, bridges, and road links to many interior places in various flood hit districts of the state even as there are reports of breaches on embankments at many places throughout the state.