At least 55 species of herpetofauna, comprising 20 amphibian species and 35 reptile species, have been recorded in a recent survey conducted in the Greater Indo-Bhutan Manas landscape. 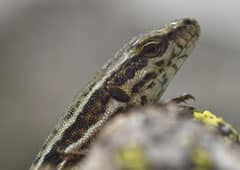 Guwahati: At least 55 species of herpetofauna, comprising 20 amphibian species and 35 reptile species, have been recorded in a recent survey conducted in the Greater Indo-Bhutan Manas landscape.

Most of the herpetofaunal species recorded from Royal Manas National Park, Bhutan are new country records for the neighbouring country with some of the species found being of utmost scientific interest, he said.
The Manas National Park in India is found to hold an admixture of Indian, Indo-Malayan and Indo-Chinese elements.

Habitat patches at Lotajhar, Doimari inside Manas National Park were found to be particularly rich in forest species whereas grassland-wetland areas such as Kuribeel under Bansbari Range were identified as critical turtle habitat of the park, Das pointed out.

He emphasised on the need for conducting long term and periodic surveys to have a better understanding of the species richness and ecology, which will eventually contribute to the conservation of this ecologically important group.

In all these habitat sites like forest streams, forest under-storey, rocky areas and water logged areas in the interior of forest were sampled mostly using visual-encounter search and the survey was carried out both during day and night to study the activity pattern of diurnal and nocturnal species.

The rich diversity of mammals and birds of the park has been well documented but there is scanty information on reptiles and amphibians of the park and the survey was undertaken to inventorize hitherto unknown diversity of the species.

Das led the technical team which comprised other researchers from the Wildlife Institute of India, Arya Vidyapeeth College, Gauhati University and NGO Aaranyak along with frontline staff of the various anti-poaching camps in the Park.