Microalgae-based biofuel has the potential to quench a sizable chunk of the world`s energy demands, scientists say. 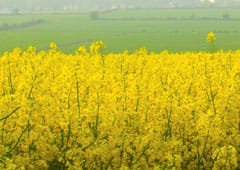 Washington: Microalgae-based biofuel has the potential to quench a sizable chunk of the world`s energy demands, scientists say.

"Our aim wasn`t to debunk existing literature, but to produce a more exhaustive, accurate and realistic assessment of the current global yield of microalgae biomass and lipids," Moody said.

"Our results were much more conservative than those found in the current literature. Even so, the numbers are impressive," Quinn said.

Algae yields about 2,500 gallons of biofuel per acre per year. In contrast, soybeans yield approximately 48 gallons; corn about 18 gallons, researchers said.
"In addition, soybeans and corn require arable land that detracts from food production. Microalgae can be produced in non-arable areas unsuitable for agriculture," Quinn said.

Researchers estimate untillable land in Brazil, Canada, China and the US could be used to produce enough algal biofuel to supplement more than 30 per cent of those countries` fuel consumption.

"That`s an impressive percentage from renewable energy. Our findings will help to justify the investment in technology development and infrastructure to make algal biofuel a viable fuel source," said Moody.

The research was published in the journal PNAS.