The alarming depletion in the population of Sea Cucumber, also known as earthworms of sea, due to pollution, illegal fishing and over-exploitation can endanger marine eco-system in Bay of Bengal and Indian Ocean, according to a top Zoological Society of India scientist. 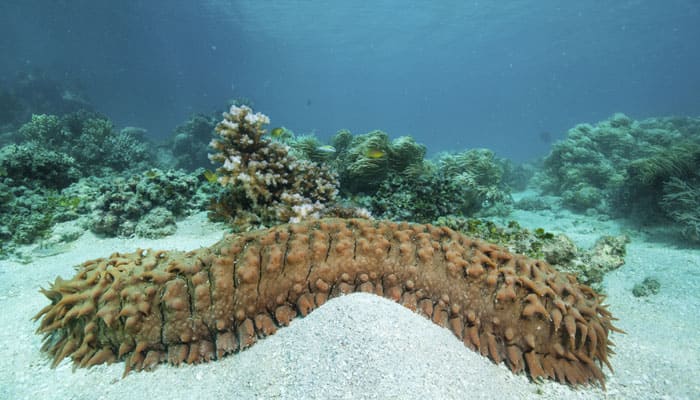 Kolkata: The alarming depletion in the population of Sea Cucumber, also known as earthworms of sea, due to pollution, illegal fishing and over-exploitation can endanger marine eco-system in Bay of Bengal and Indian Ocean, according to a top Zoological Society of India scientist.

Sea Cucumber, or Holothurians, are marine animals with a leathery skin and an elongated body. They are found on the sea floor.

Zoological Society of India director K Venkataraman said that of around 1,450 species of Sea Cucumbers found in the marine system worldwide, 173 are found in India. Out of them, 16 species have been identified as economically important.

"The Sea Cucumbers are vulnerable due to over exploitation and poaching and are facing threats of extinction. If these marine animals become extinct, it will have a devastating impact on marine ecosystem," the ZSI director told PTI.

Venkataraman explained that the function of Sea Cucumber was akin to function of earthworms in the land eco system.

"Sea Cucumbers are engineers of marine eco system and without these marine animals the sea eco system would turn barren," he said.

The creatures feed on algae, little aquatic animals, or waste materials. They break down these consumed particles into even smaller pieces, which act as food for bacteria and other marine creature and then recycle them back into the ocean ecosystem.

"The sea cucumbers play an important ecological role in nutrient cycling, bio-turbation process in marine benthic communities and contribute to the oxygenation of the upper sediment levels," he said.

According to Venkataraman, extinction of these marine creatures will reduce overall productivity of coral reefs.

These marine animals have huge economic significance pharmaceutically and as a gourment food item.

Another source of threat is the emerging global trade in home aquaria where the animals find place.

Venkataraman said there was need to raise awareness among the masses, especially in the coastal areas.

Climate change to drive fish away from tropics