Discoloration of the Taj Mahal: What to blame?

Even as measures -- some of them knee-jerk -- are being taken to stop the majestic Taj Mahal from turning yellow, the exact causes for the monument's discoloration are yet to be ascertained, a recent analysis shows. 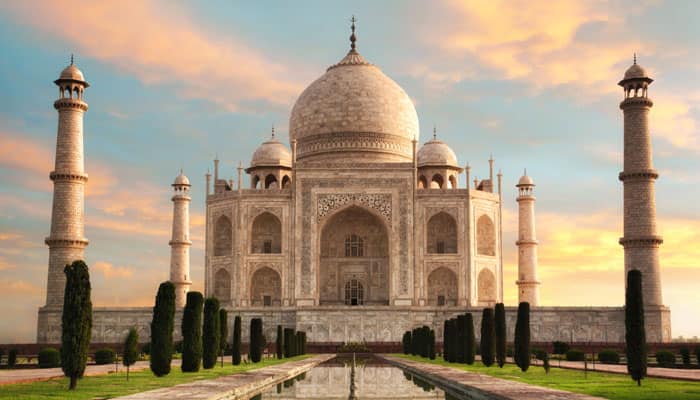 Agra: Even as measures -- some of them knee-jerk -- are being taken to stop the majestic Taj Mahal from turning yellow, the exact causes for the monument's discoloration are yet to be ascertained, a recent analysis shows.

The analysis was undertaken by science and environment fortnightly 'Down To Earth'.

"We will not be able to fix the problem unless we know the underlying cause," says Down To Earth (DTE) editor and Centre for Science and Environment (CSE) director general Sunita Narain.

Different analyses have come up with different culprits, ranging from algae and dirt to the resin applied on the Taj to preserve the monument. In the 1980s, sulphur dioxide was suspected to be turning the white facade yellow.

More recent studies have suggested that the scourge of pollution continues to adversely affect the white marble of the monument.

In 1996, a Supreme Court order led to a range of measures to control pollution.

But the continued discoloration means that either the court's orders remain unimplemented, or that "there is something new and different that needs to be addressed", according to the DTE report.

"In Agra and Mathura, vehicular traffic has increased manifold. The cities have not invested in public transport and even though compressed natural gas (CNG) is available, they have not made optimum use of this clean fuel," says Narain.

Recently, in a knee-jerk reaction, the Agra administration asked the petha (local sweet made from ash gourd) makers to switch from coal to LPG or shut shop. The move has left many people jobless.

"The fact is that poor people in Agra have paid a big price to keep the environment of the Taj clean," she rues.

The DTE analysis lists the following grave threats that the Taj faces:

Natural causes: Mineral impurities present in the marble get oxidised and create brown stains. Rain also has a weathering effect on the marble and can cause chipping and cracking. The iron dowels used to fix the marble slabs on the building get rusted and the rust flows down with rain, getting deposited on the marble.

Tourists: The biggest threat to the Taj is the unregulated number of visitors, which on some days is over 50,000. Constant treading wears down the marble floors. Presence of visitors increases humidity inside the building and the grease from their palms causes deposition of grime on the walls.

The greater threat is to the red sandstone used in the Mehman Khana and the mosque on either side of the Taj. Unlike marble, which is hard, red sandstone is porous.

Air pollution: A recent Indo-US study found that dust and carbon-containing particles are settling on the Taj Mahal and causing discoloration. Earlier, the Mathura refinery and small industries were seen as the cause for the 'yellowing' of the monument, prompting the Supreme Court to order use of cleaner fuels by these units.

Receding, polluted Yamuna: Media reports in 2011 suggested that the receding Yamuna is weakening the sal wood in the foundations of the Taj which needs constant moisture to prevent it from cracking.

Taj's foundation, built of brick, watertight mortar and wood, is supported by circular wells dug in the riverbank to give it stability. The low flow in the river and the high pollution are also major causes of concern.

Tree-felling: A large number of trees have been felled in Agra in recent years to build roads and other infrastructure. Agra lies in a semi-arid zone, and experiences very hot summers when temperatures touch 49 degrees Celsius. Hot dusty winds have an abrasive effect on the marble. Increasing green cover and the number of water bodies is one way of curbing dust pollution.

River-front project: Taj Heritage Corridor - the riverfront project comprising food plazas and malls, planned between the Agra Fort and the Taj - was shelved on the Supreme Court's orders as it could have been a threat to the monument. Sand accumulated in the reclaimed riverbed can erode the marble surface during sand storms, says the ASI. The site is yet to be turned into a green belt as directed by the court.

Only 1000 vehicles per day to pass through Rohtang pass: NGT