The US space agency is set to launch a new online tool to protect endangered blue whales. 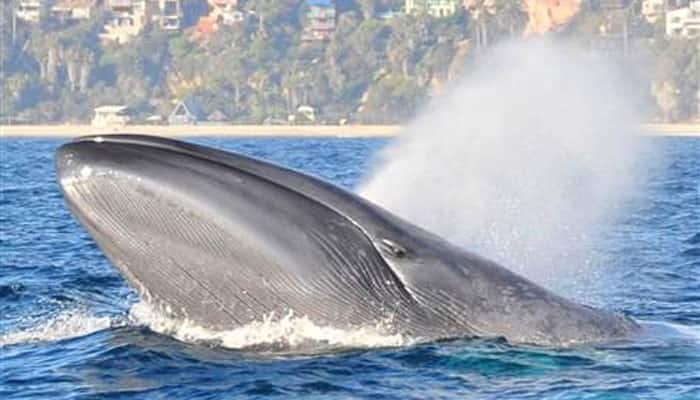 Washington: The US space agency is set to launch a new online tool to protect endangered blue whales.

The WhaleWatch tool, set to be released later this year by the National Oceanic and Atmospheric Administration (NOAA), will help decrease whale mortality due to collisions with shipping and fishing gear.

About a fourth of the roughly 12,000 blue whales in the world today live in the Pacific Ocean. They are the biggest animal to have ever lived on Earth, over 100 feet long, over 100 tonnes in weight and their colour a sort of iridescent blue.

"When you see them rising to the surface, you start seeing this glimmer that keeps getting bigger and bigger. They are just amazing," said Bruce Mate, director of the Marine Mammal Institute at Oregon State University in a statement.

Mate, who has been tagging blue whales since 1979, is part of a team that has created the new WhaleWatch tool. The tool will be used to address conflicts between humans and whales based on his tag data of four whale species and satellite observations from NASA and other agencies.

It will show for each month the most likely locations of blue, humpback, fin, and grey whales along the West Coast of the US and Canada based on current environmental conditions detected by satellites.

In addition, WhaleWatch has a daily product that will predict the movements of blue whales for any given day. To develop the tool, the team started with 15 years of whale tag data and matched it in place and time with ocean depth measurements and satellite measurements of sea surface temperate, chlorophyll concentration and sea surface height.

Most of blue whales, along with other endangered whale species, migrate up and down the California coast -- along with heavy fishing and shipping traffic to and from the major ports of Los Angeles and San Francisco.

Massive vessels navigating through their dining areas near the ports increase the chances that a whale will be injured or killed by a collision. Becoming entangled in fishing gear can hamper a whale's ability to feed or swim to the surface to breathe.

"The real way to reduce the risk of a whale getting hit is to reduce the overlap (of whales and vessels)," added Monica DeAngelis, marine mammal scientist at NOAA.