Alarmed by frequent incidents of rhino poaching in north Bengal, the West Bengal government has decided to adopt a two-pronged approach to deal with the menace. 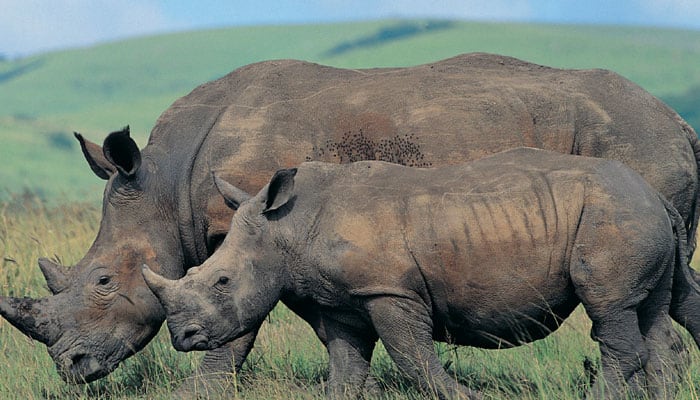 Kolkata: Alarmed by frequent incidents of rhino poaching in north Bengal, the West Bengal government has decided to adopt a two-pronged approach to deal with the menace.

First, the government intends to create a seven-member body with members drawn from the Sashastra Seema Bal, Border Security Force, CID and West Bengal Forest Department to keep an eye on rhino-poaching and involve local people in the exercise.

In view of the gravity of the situation, the West Bengal Wildlife Board had suggested that forest guards be issued "shoot-at-sight" orders to save the animals, but the government preferred not to take that extreme step.

"We are not in favour of the shoot-at-sight policy. We have full faith in the local inhabitants there and we are trying to involve them in our bid to save our rhinos," West Bengal Forest Minister Binay Krishna Barman told PTI.

The minister said that the seven-member body would include representatives from the state Forest Department and commandant-level officers from the Sashastra Seema Bal (SSB), the Border Security Force (BSF) and the CID.

"They will share information with each other on a daily basis," he said.

Asked what kept the state government from emulating the example of Assam in issuing "shoot-at-sight" orders to keep poachers at bay, the minister said, "Shoot-to-kill should be adopted as the last measure and in self-defence. It's better to educate people and raise their awareness about the need to conserve rhinos," the minister explained.

This would help the state administration gain confidence of the local people, who were largely believed to provide shelters to poachers from neighbouring states, mainly Assam, the minister said.

Assam became the first state in the country to issue the "shoot-at-sight" orders for poachers in Kaziranga National Park.

"The issue of poaching came up in the meeting. I mooted the idea to issue shoot-at-sight orders to stop rhino poaching in north Bengal. Now it's upto the state government to decide," one of the Wildlife Board members, Joydip Kundu, said.

Another member of the board, Biswajit Roy Chowdhury, said that several posts for forest guards were lying vacant for years and an immediate recruitment was needed.

"In the last 13 years I've been strongly saying that there have been number of vacancies in the forest guards' posts but no substantial action has been taken," Roy Chowdhury said.

The state government, Barman added, has taken up several welfare programmes for the locals besides setting up primary schools, shops for unemployed youths, market and initiated supply of drinking water to adjoining areas of the Jaldapara National Park and Gorumara.

"Not only these, we have also distributed free bicycles and sewing machines so that they do not need to depend on the forest for their livelihood. Recently, we have hosted a film festival at Jalpaiguri and made it a point that the youths participate in that," he said.

Govt to conduct study on communities dependant on Ganga for livelihood