Goa Health Minister Laxmikant Parsekar was sworn-in as the state's 11th chief minister Saturday, pipping to the post rivals like assembly Speaker Rajendra Arlekar and Deputy Chief Minister Francis D'Souza who had doggedly opposed his candidature till less than two hours before the oath taking. 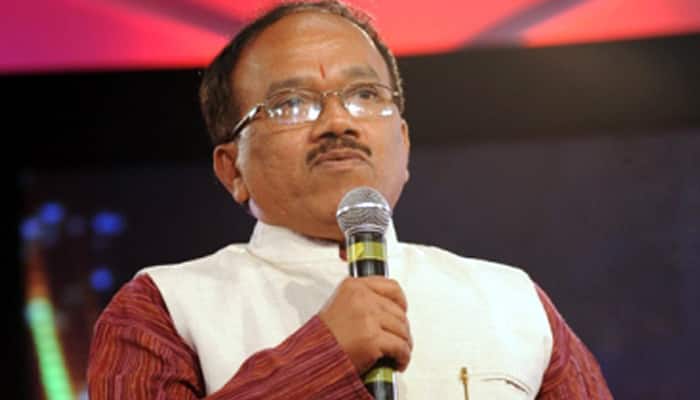 Panaji: Goa Health Minister Laxmikant Parsekar was sworn-in as the state's 11th chief minister Saturday, pipping to the post rivals like assembly Speaker Rajendra Arlekar and Deputy Chief Minister Francis D'Souza who had doggedly opposed his candidature till less than two hours before the oath taking.

The diminutive Parsekar, 58, along with nine cabinet ministers was administered oath of office at the Raj Bhavan grounds Saturday afternoon, shortly after he formally staked claim to form a government.

Later speaking to the media for the first time in his new role, Parsekar, a former Bharatiya Janata Party state chief, unwittingly conceded that the shadow of his predecessor Manohar Parrikar, who resigned earlier in the day due to his impending elevation to the union cabinet, would continue to loom large.

"Manohar Parrikar is going to return from Delhi on the 13th or 14th (November). We will decide the portfolios after that," he told reporters, even as he interacted with hundreds of his supporters.

Parrikar will Sunday be sworn-in as union cabinet minister, most likely with the defence portfolio, thus necessitating appointment of a new chief minister for Goa.

Earlier in the day, BJP state leaders as well as central observers Rajeev Pratap Rudy and Purshottam Rupala were busy fire-fighting dissent sparked by D'Souza who since Friday had insisted on refusing to work with Parsekar or Arlekar, claiming both were junior to him.

"I am still in the race for chief minister. I will speak to the party's observers and make my point clear. I will quit government and will stay away from the swearing-in ceremony today. I am ok with being an ordinary MLA," D'Souza told reporters before a meeting of the party legislators.

D'Souza, one of the oldest minority faces in the Goa BJP, also claimed the support of 15 legislators, who he claimed supported him.

What followed was a series of group and individual interactions at the BJP's state headquarters spread over nearly three hours between Parrikar, state party president Vinay Tendulkar, and the central observers on the one hand and the BJP legislators on the other.

Even as the BJP failed to resolve the crisis, precipitated by D'Souza and his band of members namely Vishnu Wagh and Mandrekar, Raj Bhavan authorities issued formal invitations for swearing-in ceremony leaving the name of the chief minister blank!

The breakthrough was achieved an hour and a half before the swearing-in ceremony after a final meeting between D'Souza, Arlekar, Parsekar and Parrikar and the two party observers. Emerging from the meeting, D'Souza did a volte face on his earlier defiant position.

"I thought Parsekar was being imposed on us. Today I was told that majority of the MLAs were supporting him," he said.

Party sources told IANS that apart from being made deputy chief minister again, D'Souza would be allotted one additional key portfolio, namely finance or home, in addition to the portfolios he was in-charge of for the last two and a half years.

D'Souza however said: "I will be happy with what I am offered".

Rudy sough to paper over the cracks.

"There was a complete unanimity as far as the choice of leader of the legislature party was concerned. And it was a unanimous decision when the name of Laxmikant Parsekar was proposed by Manohar Parrikar, the outgoing CM of Goa and seconded by Francis D'Souza who has been elected as the deputy leader of the party," he said after the meeting.

For Parsekar, a former principal and a horticulturist by profession, Saturday was a sunny winter day when he beats the odds convincingly to head the state - first from Arlekar, who was favoured by the BJP's central leadership and then the rearguard skirmish with D'Souza.

Sources said that Parsekar was backed by BJP's state organizing secretary Satish Dhond and the combination lobbied aggressively to knock Arlekar out of contention. "D'Souza was done in by his own greed. He was clearly told by the party observers to accept an additional ministry and fall in line or face action," sources said.

Laxmikant Parsekar: A 'rebel' who made it big in Goa with BJP