River Saraswati is for real, found in Haryana

Efforts to unravel the mystery behind the ancient Saraswati river, which has its references in 'vedic' texts, got a major breakthrough when a team of geologists and scientists found traces of the extinct river last month. 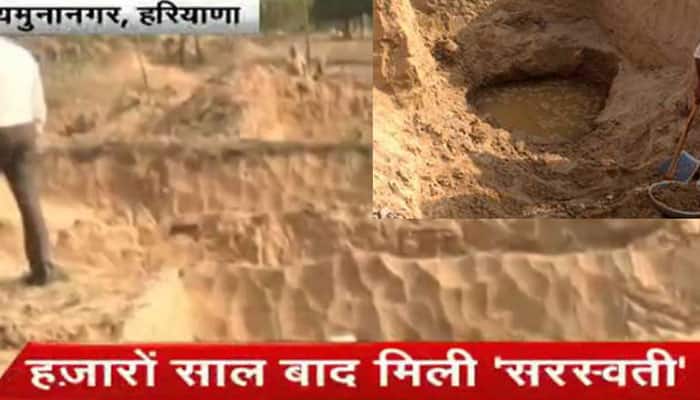 New Delhi: Efforts to unravel the mystery behind the ancient Saraswati river, which has its references in 'vedic' texts, got a major breakthrough when a team of geologists and scientists found traces of the extinct river last month.

According to reports, the team last month began excavations at a place, just five kilometres away from Yamuna Nagar's Adi Badri in Haryana, in order to trace the source and route of the river, which was extinct till now.

After digging just seven to eight feet deep, a stream of water came gushing out of the Earth at a place called Mugalwali near Adi Badri, which was once considered to be the holy Saraswati river’s course.

Though the Archaeological Survey of India has not not officially confirmed the findings, experts believe that the stream of water is part of the ancient river that flowed nearly 5,000-6,000 years ago.

The Centre and the Haryana Government had recently launched an effort to trace the route of the ancient river. Though serious efforts had been made in the past by geologists and scientific community both during British period as well as in independent India, the river remained a mystery so much so that its mention in the ancient texts has invariably been termed as mythological reference.

The excavation work was being carried out by the administration employing dozens of daily wage workers under the MNREGA scheme. Region's Deputy Commissioner and SDM Bilaspur also visited the excavation site to witness the development and joined the locals who offered prayers to Goddess Saraswati, said reports.

The discovery has raised hope for rejuvenating the holy Saraswati river which was once considered to be extinct as locals had to dig around 85 ft deep to avail water through tubewells in the nearby areas.

The Haryana government, which had started the excavation work, also promised to develop the Adi Badri Heritage Board to increase the importance of the site which would also lead to promotion of the site from religious tourism point of view.

The ML Khattar-led BJP government in the state has started to work for preserving and promoting Hindu cultural and religious sites in the state after coming into power in the state.

A 20-member panel has also been constituted to decide the route of the ancient river. The panel will be led by the head of the Sarasvati Nadi Shodh Sansthan,