The Indian Coast Guard foiled a possible terror attack bid when it intercepted a suspicious Pakistani boat off the Porbander coast in Gujarat. 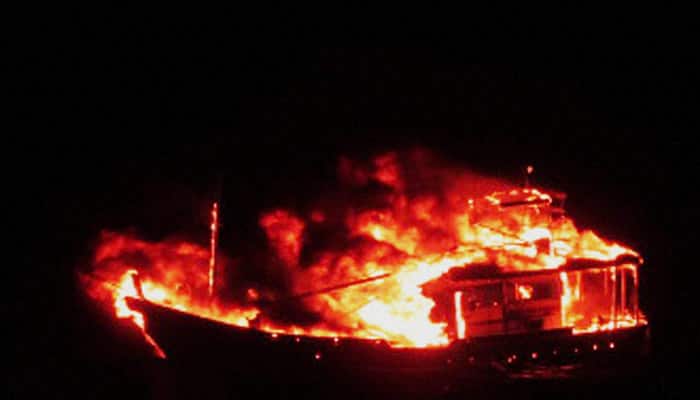 New Delhi: The Indian Coast Guard foiled a possible terror attack bid when it intercepted a suspicious Pakistani boat off the Porbander coast in Gujarat.

Coast Guard ships and choppers intercepted the suspicious Pakistani fishing vessel about 365 kilometres (some 200 nautical miles) off the Porbander coast on the intervening night of December 31 and January 1, the Defence Ministry said in a statement.

The vessel, which was carrying explosives, did not pay heed to the warning by a Coast Guard ship and instead increased speed and tried to escape away from the Indian side of maritime boundary.

A hot pursuit followed and it was intercepted after an hour-long chase.

The statement said four crew members were spotted on board the vessel who set it on fire after being chased. The boat ultimately sank following an explosion.

The Coast Guard has deployed three to four ships and several helicopters in the area to ensure none of the suspected crew members managed to flee.

As per sources, spy agency National Technological Research Organisation (NTRO) had been tracking the boat ever since it set sail from Keti Bunder near Karachi on the night of December 30.

As soon as the boat entered the Indian maritime boundary, it was intercepted by Coast Guard ships and choppers deployed in the area.

The entire operation, based on intelligence inputs, was kept secret and even the Navy was not informed about it, reports quoting sources claimed. Only a few Coast Guard ships and choppers deployed in the area were informed about the development.

KR Nautiyal, DDG Operations, who led the Coast Guard operation, told a TV news channel that they cannot confirm as yet whether the four men spotted on the boat were Lashkar-e-Toiba terrorists.

Sources, meanwhile, claimed that a wireless set was also being used on the boat, probably to speak to the "handlers". 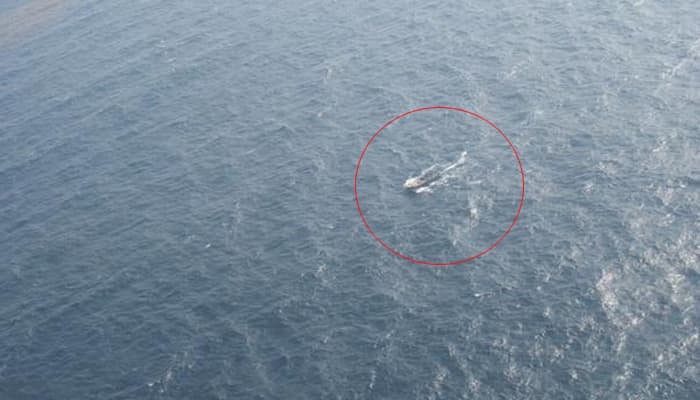 The Defence Ministry issued a statement today which said: "An intelligence based midnight operation was conducted on night of December 31 and January 1 by the Indian Coast Guard ships and aircraft to intercept a suspicious fishing boat in Arabian Sea near Indo-Pak maritime boundary, approximately 365 km from Porbander (Gujarat).

"As per intelligence inputs, a fishing boat from Keti Bunder near Karachi was planning some illicit transaction in Arabian Sea. Coast Guard warned the fishing boat to stop for investigation; the boat (instead) increased speed and tried to escape away from the Indian side of maritime boundary.

"The crew on board suspicious boat hid themselves in lower deck compartment and set the boat on fire, which resulted in an explosion.

"Search operations continued by Coast Guard ships and aircrafts for any possible survivor."

India`s vulnerability to militant attacks along its long coastline was exposed in 2008 after the seaborne assault by Pakistani gunmen on Mumbai, the nation`s financial capital.

Ten Pakistani gunmen arrived on a rubber boat in Mumbai for the commando-style assault on two luxury hotels, a train station and a Jewish centre that killed 166 people.

Since the attack, India has upgraded coastal security, spending money on patrol vessels, helicopters and building a coastal radar network.