Giving an edge to the country's strategic strike capability, India on Saturday successfully carried out the maiden canister-based trial of its most potent missile Agni-V, which has a strike range of over 5000 kms and can carry a nuclear warhead of over one tonne, off Odisha coast. 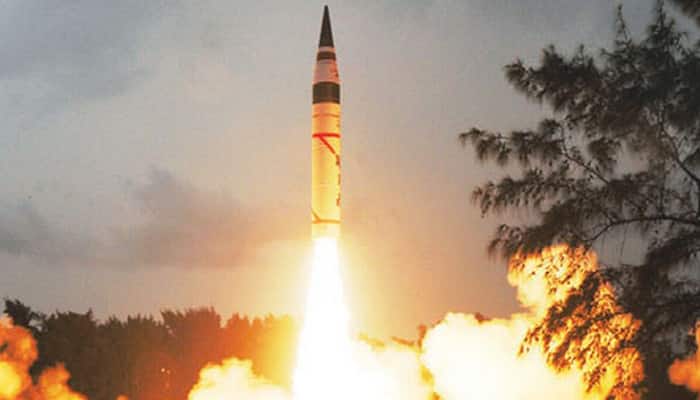 Balasore: Giving an edge to the country's strategic strike capability, India on Saturday successfully carried out the maiden canister-based trial of its most potent missile Agni-V, which has a strike range of over 5000 kms and can carry a nuclear warhead of over one tonne, off Odisha coast.

The missile was launched from a canister mounted on a road-mobile launcher at Wheeler's Island.

The three stage, solid propellant "missile was test-fired from a mobile launcher from the launch complex-4 of the Integrated Test Range (ITR) at about 8.06 hours," ITR director MVKV Prasad told a news agency.

"A gas generator at the bottom of the canister pushed the 17.5 metre long, 50-tonne Agni-V out of the canister. The missile, which can take on targets situated more than 5,000 km away, had a dummy pay-load in today's trial," said a senior defense analyst at the ITR here.

The missile version was stored and launched from a hermetically sealed canister. The steel container was made of maraging steel.

Defence analysts said the canister would make the missile fully road or rail mobile, giving a great deal of secrecy and flexibility to the country's strategic strike capability.

The alternate to using canister is fixed ground-based silos which are vulnerable to surveillance and attack.

"We can transport the missile to anywhere and fire from there. This will give advantage over the rivals. This apart, the canister can keep the missile in appropriate atmosphere," said RK Kar, another missile researchers.

Prasad said the canister version of Agni-5 missile was successfully test launched. "The missile, witnessed a flawless 'auto launch' and detailed results will be known after all data retrieved from different radars and network systems," Prasad said.

Today's launch was the third developmental trial of the long range missile. The first test was conducted on 19 April, 2012 and the second test on 15 September, 2013 from the same base.

The indigenously developed surface-to-surface missile Agni-V is capable of striking a range more than 5000 km. It is about 17 meters long, 2 metres wide and has a launch weight of around 50 tonnes. The missile can carry a nuclear warhead of more than one tonne.

Unlike other missiles of Agni series, the latest one `AGNI-V`, is most advanced having some new technologies incorporated with it in terms of navigation and guidance, warhead and engine, Prasad said.

"Lot of new technologies developed indigenously were successfully tested in the first Agni-V trial. The very high accuracy Ring Laser Gyro based Inertial Navigation System (RINS) and the most modern and accurate Micro Navigation System (MINS) had ensured that the missile reaches the target point within few metres of accuracy.

"The high speed onboard computer and fault tolerant software along with robust and reliable bus guided the missile flawlessly," said an official.

India has at present in its armoury of Agni series, Agni-I with 700 km range, Agni-II with 2000 km range, Agni-III and Agni-IV with 2500 km to more than 3500 range. After a few more trials, Agni-V will be inducted into the services.