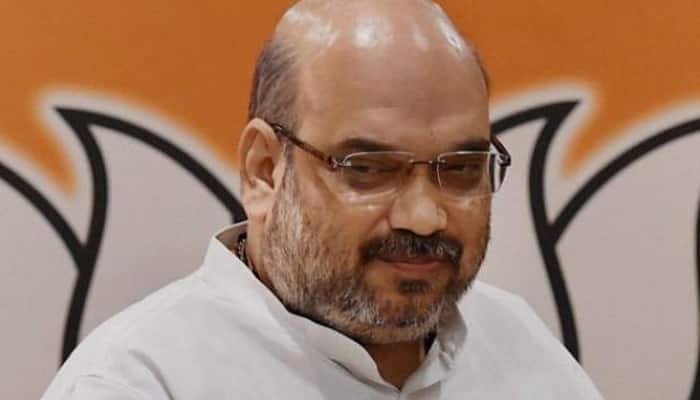 New Delhi: BJP President Amit Shah on Wednesday raised questions over the circumstances that led to Bhartiya Jana Sangh founder Syama Prasad Mookerjee's death and added that he was informed that he was allowed to enter Jammu and Kashmir without permit and there he was held in custody by the Kashmir police.

The BJP President said that a large section believes that Mookerjee, who had gone to participate in a protest in Kashmir in 1953, was actually murdered and raised questions about Nehru's handling of the events and the decision not to conduct an inquiry into it.

Shah claimed that Mookerjee was kept in an inadequately equipped safehouse near Srinagar and then not provided medical facilities as he was admitted to a gynecological ward even though he had a heart ailment.

Shah said that history has not done justice to the patriot and eminent educationist that Mookerjee was adding that if the history of the country was to be written impartially, then an important place will be provided to Mookerjee.

"It is unfortunate that first the British, and later the Leftists distorted the history of the country," Shah said. History has been viewed through the lens of ideology, he said claiming this was one of the reasons, Mookerjee was not conferred his due place in the annals of history.

Shah said it was because of Mookerjee that permits are not needed to enter Kashmir now and the titles Prime Minister and President are not used separately for J&K.

Shah claimed that if the Congress leadership at the time of independence had not got into a hurry, the division of India could have been prevented.

"When at the time of independence, the entire Congress leadership was anxious to become independent.... All of them were ageing, if it gets delayed was also worrying them. But at that time a young leader thought that a mistake should not happen and Bengal was saved," Shah said.

Earlier, Mr Roy who is also a biographer of Mr Mookerjee, narrated his contribution in running an "equitable" government in West Bengal in the pre-independence era and then his protest over special permits to enter Kashmir.

He claimed that Mr Mookerjee was allowed to enter Kashmir where the Jammu and Kashmir police were waiting for him. He also raised questions over the improper manner in which a leader of Mr Mookerjee's stature was dealt with.

Mr Roy also claimed that when Mr Nehru had visited Jammu and Kashmir, he had not bothered to visit Mr Mookerjee who was languishing in confinement there. He criticised Mr Nehru for deciding not to conduct an inquiry into the death despite a request from Mr Mookerjee's mother.

An exhibition on the Bharatiya Jana Sangh's life has been organised at NMML which will go on till July 6, he added.