BJP, not Congress should apologise for pushing country to edge: Ghulam Nabi Azad 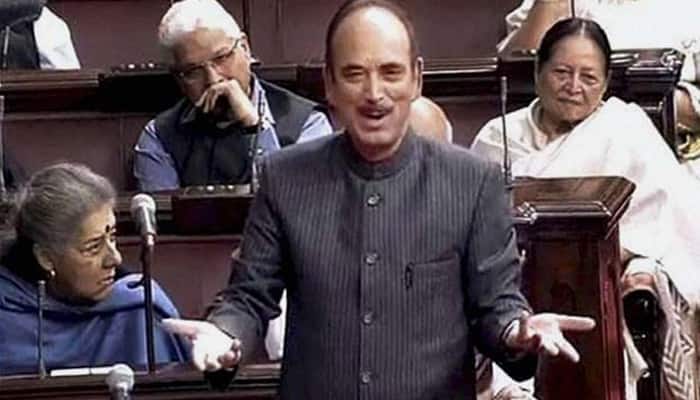 New Delhi: While the Union Ministers and Bharatiya Janata Party MPs are demanding his apology for comparing the impact of the ban of notes with terrorist attacks, Leader of Opposition in the Rajya Sabon Friday said there is no question of apologising for his remark.

Talking to the media, Azad said, "BJP should ask apology for pushing the country to edge. The kind of situation that is presently created it is all because of the BJP government."

Prime Minister Narendra Modi and senior ministers of his government, meanwhile, met in the former`s chamber in Parliament this morning.

Union Minister of State for Minority Affairs Mukhtar Abbas Naqvi today raised Azad`s controversial remark in the Upper House and said, "Congress is trying to destroy the fight against corruption."

"The Leader of Opposition in the House should apologise to the nation for his comments against the prime minister, who is fighting for the poor and the weak," he added.

On Day 2 of the Winter Session, both Houses were adjourned yesterday as a united Opposition demanded a debate on demonetisation, including voting, which was rejected by the government. Opposition parties attacked the Centre, saying the demonetisation move has hit the poor and the marginalised.

The main opposition Congress Party on Thursday demanded that Prime Minister Narendra Modi had made demonetisation announcement on November 8, and thus, until the former comes to the Rajya Sabha, there will be no discussion on the issue.

"We raised this issue in the Rajya Sabha yesterday that the demonetisation announcement was made by the Prime Minister, therefore, he should have been present in the House, and should have listened to the opposition, and answered too.

We wanted his presence in the House yesterday, but he did not turn up. We have been demanding since morning, and had also made it clear to the leader of the House yesterday, that until the Prime Minister comes to the Upper House, there will be no discussion on the issue," the leader of opposition Ghulam Nabi Azad told ANI.Bahujan Samaj Party (BSP) president Mayawati also sought a reply from the Prime Minister on the ongoing discussion on demonetisation in the Rajya Sabha.

Talking to reporters outside Parliament, Mayawati said the issue is sensitive and a Joint Parliamentary CommitteeJ (JPC) should be set up to probe the alleged leakage of the decision on demonetisation.