The Congress on Tuesday demanded the resignation of Union Minister of State for Home Affairs Kiren Rijiju over his alleged involvement in a scam related to the construction of a 450-crore Hydro-electric power project in Arunachal Pradesh. 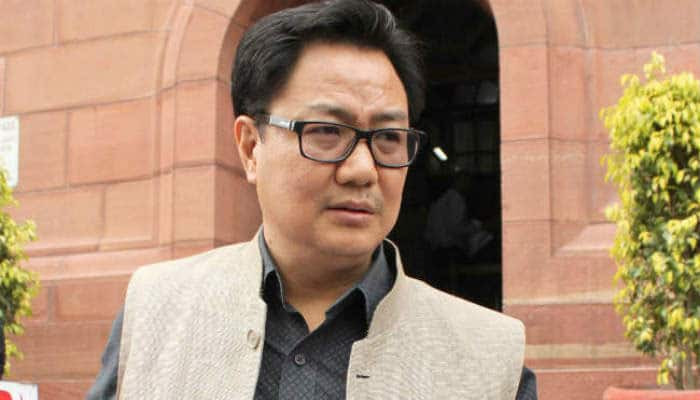 New Delhi: The Congress on Tuesday demanded the resignation of Union Minister of State for Home Affairs Kiren Rijiju over his alleged involvement in a scam related to the construction of a 450-crore Hydro-electric power project in Arunachal Pradesh.

Addressing a press conference here, Congress spokesperson Randeep Surjewala said,  ''Rijiju's brother, a contractor in Arunachal Pradesh, was involved in a scam and had the backing of the minister.''

"We have audio proof against Kiren Rijiju's brother," the Congress spokesperson said, while also demanding a fair probe into the matter.

The main opposition party also attacked Prime Minister Narendra Modi, who had said during the 2014 General Elections that he would neither indulge in corruption not let others do anything.

The Congress leader further claimed that "MoS Rijiju cleared dubious deals in the Kameng Hydro Electric project and his cousin's voice has been caught on the 28-minute audio tape. "

"He has no right to continue as a minister in the Union Cabinet. He must tender his resignation till the probe ends as several facts on hydro power project have been forged," Surjewala added.

However, Rijiju, on his part, denied all such allegations as ''unfounded and baseless''. Rijiju said that those who "planted" the news that he has been named along with a few others in a vigilance report on corruption at North Eastern Electric Power Corporation (NEEPCO) will get beaten up with shoes if they come to Arunachal Pradesh.

Rijiju also denied any links with his Goboi Rijiju - the man in question who is believed to be his distant cousin. He also questioned the credibility of the report, saying there is no truth at all in it.

The Indian Express had reported that Rijiju; his cousin, a contractor in Arunachal Pradesh, Goboi Rijiju; and several top officials of the state-run NEEPCO, including its Chairman and Managing Director, have been named in a 129-page report by the PSU's Chief Vigilance Officer that alleges corruption in the construction of two dams for 600 MW Kameng Hydro Electric Project, one of the biggest hydro-electric projects in Arunachal Pradesh.

Rijiju had also written a letter to Ministry of Power to release funds to the contractor and his cousin Goboi Rijiju. In the wake of the controversy, Rijiju has admitted that he had indeed written the letter.

"Is trying to help people corruption?" he asked.

Chief Vigilance Officer Satish Verma, a Gujarat IPS officer, was pulled up by NEEPCO for "unauthorised absence," and transferred to the CRPF in Tripura soon after his report.

The paper quoted him as attributing the “absence” to his investigation.

Express said that Verma's report was sent to the CBI, CVC and the Ministry of Power in July this year. It alleges an "elaborate conspiracy" involving contractors, NEEPCO officials and the West Kameng district administration to defraud NEEPCO and the government of funds that "may extend up to Rs 450 crore."

West Kameng, the site of the project, falls in Arunachal West, which is the parliamentary constituency of Rijiju.