The Indian Defence forces are all decked up to celebrate the first ever International Yoga Day to be observed worldwide tomorrow, June 21. 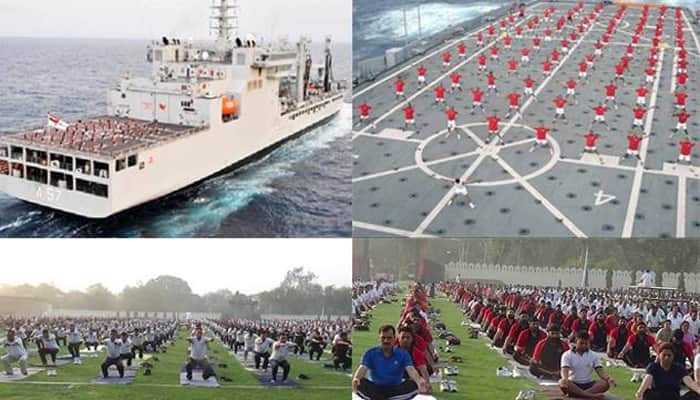 New Delhi: The Indian Armed Forces are all set to celebrate the first ever International Yoga Day to be observed worldwide on Sunday, June 21.

The Defence Ministry is planning a number of events for the armed forces personnel by organising yoga sessions at various places.

The event is also reportedly planned in Siachen, the highest battleground in the world.

From the Siachen Base Camp…the Indian Army Personnel practising Yoga, all geared up for #YogaDay! pic.twitter.com/gDX0VLqjSU

The Navy has planned “Yoga across the Ocean” with units located as far as the Mediterranean Sea on the West, the Western Pacific Ocean on the East and the Southern Indian Ocean in the South.

PM Modi had earlier posted on Twitter that the Indian Navy has been holding training sessions even at sea.

In what could go down as a world record, PM Modi himself will lead the first International Yoga Day, in India, tomorrow by performing various forms of 'Asanas' at Rajpath in Delhi along with more than 35,000 people.

The Prime Minister has also been educating his 13 million followers on Twitter about the different 'Asanas' with daily posts.

This video takes you through the features and advantages of Kapalbhati. #YogaDay https://t.co/AUTo1354wr

Across the country, school students, the Armed Forces and citizens are preparing for the Yoga day with rehearsals and training.

Rajpath is being readied for the big day, which is believed to be as grand as Republic Day celebrations. The venue will be fitted with 23 LED screens and 150 CCTV cameras and will be manned by 3,000 police personnel.

However, it is not just in India that the buzz around Yoga Day is growing. The day will also be observed in over 250 cities in 192 countries.

It is estimated that 250 million people around the world practise yoga, over 20 million of them in the US.