Foreign suppliers of atomic reactors to India cannot be sued for the damages by victims of a nuclear accident but can be held liable by the operator who has the right of recourse, government said on Sunday releasing details of the understanding reached with the US recently. 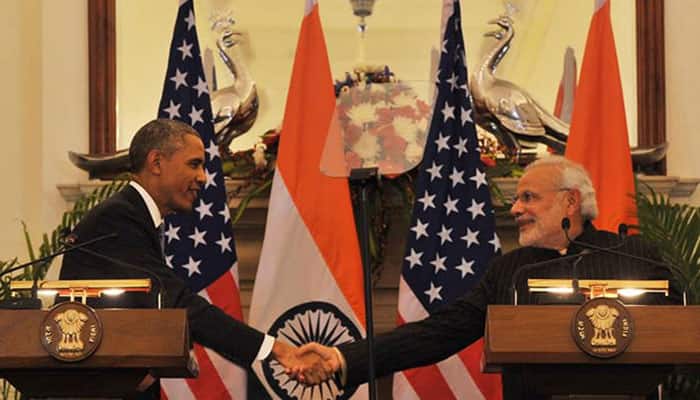 New Delhi: Foreign suppliers of atomic reactors to India cannot be sued for the damages by victims of a nuclear accident but can be held liable by the operator who has the right of recourse, government said on Sunday releasing details of the understanding reached with the US recently.

In a seven-page 'frequently asked questions' dealing with contentious issues including liability, compensation and right of recourse in case of nuclear mishap, the External Affairs Ministry said the understanding on the policy hurdles were reached after three rounds of discussions between the Indo-US Nuclear Contact Group, which met last in London, just three days before President Barack Obama arrived here on January 25.

"Based on these discussions, an understanding was reached with the US on the two outstanding issues on civil nuclear cooperation, which was confirmed by the leaders (Prime Minister Narendra Modi and Obama) on January 25, 2015," the ministry said.

Asserting that the country's Civil Liability for Nuclear Damages (CLND) Act "channels all legal liability for nuclear damage exclusively to the operator", the MEA said, "concerns" over the broad scope of Section 46, pertaining to possible actions under other laws, have been raised by suppliers, both domestic and foreign and clarified that this section "does not provide a basis for bringing claims for compensation for nuclear damage under other Acts."

The ministry further said this Section applies exclusively to the operator and does not extend to the supplier was confirmed by the Parliamentary debates at the time of the adoption of the CLND Act.

"It may be noted that the CLND Bill was adopted by a vote. During the course of the vote on various clauses of the Bill, in the Rajya Sabha two amendments were moved for clause 46 that finally became Section 46 of the CLND Act that inter- alia sought to include suppliers in this provision. Both those amendments were negatived. A provision that was expressly excluded from the statute cannot be read into the statute by interpretation," it said.

"At the same time it does not create the grounds for victims to move foreign courts. In fact that would be against the basic intent of the law to provide a domestic legal framework for victims of nuclear damage to seek compensation. The fact that a specific amendment to introduce the jurisdiction of foreign courts was negatived during the adoption of the CLND Bill buttresses this interpretation," it further added.

The ministry also rejected suggestions that there was no 'right of recourse' for an operator against foreign suppliers, saying the Section 17 of CLND provides right of recourse.

"While it provides a substantive right to the operator, it is not a mandatory but an enabling provision" which can be included in the contract between the operator and the supplier for having a risk sharing mechanism.

"As a matter of policy, NPCIL (Nuclear Power Corporation of India Ltd.), which is a public sector undertaking, would insist that the nuclear supply contracts contain provisions that provide for a right of recourse consistent with CLND Rules of 2011," MEA said.

Justifying setting up of the insurance pool of Rs 1,500 crores, the ministry said there were about 26 insurance pools operating around the world in countries such as France, Russia, South Africa and the US.

The India Nuclear Insurance Pool has been instituted to facilitate negotiations between the operator and the supplier concerning a right of recourse by providing a source of funds through a market based mechanism to compensate third parties for nuclear damage. It would enable the suppliers to seek insurance to cover the risk of invocation of recourse against them.

"The Pool envisages three types of policies, including a special suppliers' contingency policy for suppliers other than turn key suppliers. Operators and suppliers instead of seeing each other as litigating adversaries will see each other as partners managing a risk together. This is as important for Indian suppliers as it is for US or other suppliers," MEA said.

The government also rejected the contention that all the financial burden of the compensation was passed to the tax payer, saying, "It should be understood that there is no extra burden on the taxpayer or the Government."

The CLND Act already requires NPCIL (Operator) to maintain a financial security to cover its maximum liability for civil nuclear damage (Rs 1500 crores), the MEA said, adding currently, it takes out a bank guarantee for this amount against which it pays an annual fee.

With the India Nuclear Insurance Pool (INIP), a market based international best practice will be followed and the NPCIL will take out insurance under the Pool for the same amount and just as it pays an annual fee now it will pay an annual insurance premium to the Pool, it added.

The Government will make available Rs 750 crores to the Insurance Pool for the first few years till the insurance companies are able to maintain it on their own.

On maximum amount of liability, the ministry said that in respect of each nuclear incident there shall be the rupee equivalent of 300 million Special Drawing Rights (SDRs).

"As the current value of 1 SDR is about Rs 87, three hundred million SDRs are equivalent to about Rs 2,610 crores. Section 6(2) of the Act lays down that the operator's maximum liability shall be Rs 1,500 crore. In case the total liability exceeds Rs 1,500 crores, as per the CLND Act, this gap of Rs 1,110 crores will be bridged by the Central Government. Beyond Rs 2610 crores, India will be able to access international funds under the CSC once it is a party to that Convention," it noted.

With India committed to ratify the international Convention of Supplementary Compensation (CSC) for nuclear damage at the earliest, India will be able to access international funds under it also.

Country's liability law also provides that the Central Government may establish a "Nuclear Liability Fund" by charging such amount of levy from the operators, in such manner, as may be prescribed. The move may result in a nominal increase of 2 to 5 paise per electricity unit to the consumer, according to sources.

"The constitution of a Nuclear Liability Fund has been under consideration for some time. Such a Fund is proposed to be built up over 10 years by levying a small charge on the operators based on the power generated from existing and new nuclear plants. This is not expected to affect the consumer?s interests," the ministry said.

The ministry also ruled out any question of possible enhancement of the amount of compensation in the Act in future and its effect on recourse against suppliers with respect to existing contracts, saying there was well established jurisprudence that a change in law cannot alter the terms of an existing contract made under the then extant law.

"A retrospective law which affects the substantive vested rights of a Party under a contract would not be sustainable in a court of law," it added.

The MEA paper came in the backdrop of suggestion by various commentators that government had conceded the interests of tax payers to break the seven-year-old logjam in the Indo-US nuclear deal.