Arvind Kejriwal, whose Aam Aadmi Party (AAP) won a landslide in the Delhi Assembly Elections, on Tuesday said the magnitude of victory is “scary”. 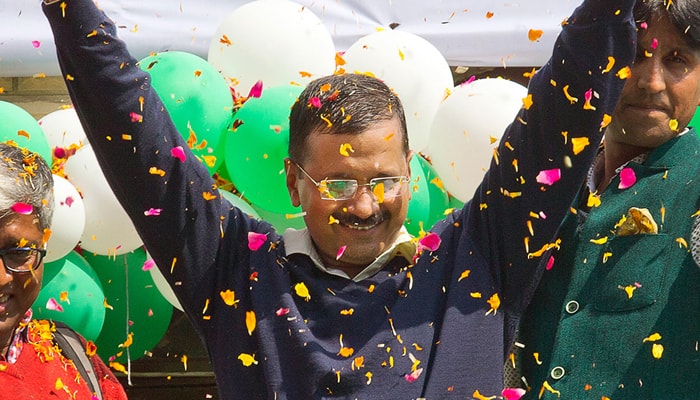 New Delhi: Arvind Kejriwal, whose Aam Aadmi Party (AAP) won a landslide in the Delhi Assembly Elections, on Tuesday said the magnitude of victory is “scary”.

“The people of Delhi have done something amazing. It's a victory of honesty and truth,” Kejriwal told a massive crowd of supporters amid loud cheer of “Paanch Saal Kejriwal”.

“When we walk on the path of honesty and truth, all the powers of the universe come together to help us,” Kejriwal told his supporters.

He, however, cautioned the AAP leaders and supporters against becoming arrogant.

“My message to everyone in AAP is – don't become arrogant. The fate that the BJP and Congress have met is because of their arrogance. If we also become arrogant, the people of Delhi will teach us a lesson after five years,” the AAP convenor said.

Kejriwal further stressed on collective effort as the way forward.

“We have to together serve Delhi; I alone can do nothing. We can turn Delhi into a city about which both poor and rich can be proud of, if we work together,” he said.

Kejriwal also thanked his family for its support.

“If my wife had not supported me, I could not have accomplished what I have. Our family's support is very important.”

The AAP won a landslide in Delhi, bagging 67 of the total 70 seats.

US hopeful of investing in India's nuclear projects