Leaders of six political parties on Wednesday announced the formation of a new party to defeat the BJP and combat communal forces in the country. 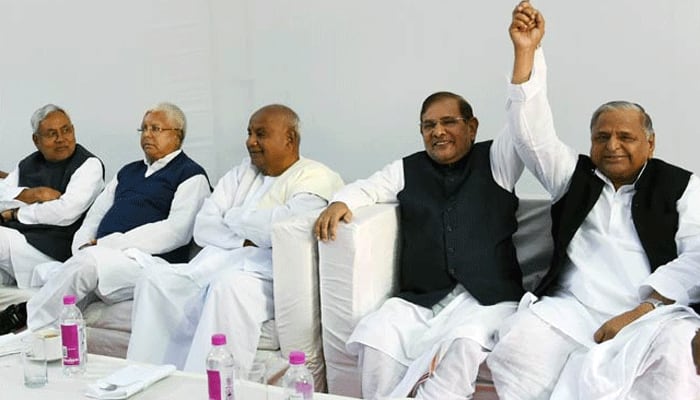 New Delhi: Leaders of six political parties on Wednesday announced the formation of a new party to defeat the BJP and combat communal forces in the country.

“The decision of the new political group was unanimously taken by the leaders of JDU, SP, RJD, SJP, JDS and INLD. The political group has decided to make Mulayamji as its leader. He will also head parliamentary board committee,” said Yadav.

On the name, flag and symbol of the new front, Sharad Yadav said, “The name of party, symbol and flag will be decided after taking into consideration views of presidents of all six parties.”

Refuting claims of ego clashes among the leaders, RJD chief Lalu Prasad Yadav said, "There are no ego issues among any of our members. We have joined hands to combat communal forces and defeat the BJP from coming to power."

Taking jibe at the merger of Janata Parivar, the BJP said that the new party cannot stop it from winning Bihar.

"Even if they all come together they can’t stop BJP in Bihar. The differences are clear before the formal merger. Even the sign name & symbol haven’t been decided yet," BJP leader Shahnawaz Hussain was quoted as saying by ANI.

Meanwhile, some reports suggest that Nitish Kumar will be the chief ministerial candidate of the newly-floated political outfit for the upcoming Assembly polls in Bihar.

While Mulayam will be the leader of the group in Lok sabha, JD(U) leader Sharad Yadav will lead the front in Rajya Sabha.

The SP has five seats in the Lok Sabha, 15 in the Rajya Sabha and 232 in the 403 member state Assembly. It is in power in Uttar Pradesh.

Former prime minister Deve Gowda's Janata Dal has total two seats in the Lok Sabha and one in the Rajya Sabha, while INLD has two members in the Lower House and one in the Upper House of the Parliament.

In totality, the new party will have strength of 15 members in the Lower House and 30 in the Upper House.

Bihar polls are scheduled to be held later this year whereas elections in Uttar Pradesh Assembly are slated for 2017.

Notably, the announcement of the big merger is made a day after BJP chief Amit Shah had sounded the poll bugle by launching a campaign for the upcoming Assembly Elections in Bihar.

Shah mocked at the proposed merger of the 'Janata Parivar' ahead of the elections, saying "zero plus zero remains a zero" and asserted nobody can prevent the saffron party from coming to power in the state.