Prime Minister Narendra Modi, making his penultimate stop in Kyrgyzstan as part of his tour of Central Asian countries, said on Sunday that his visit demonstrated the importance that India attached to new level of relationship. 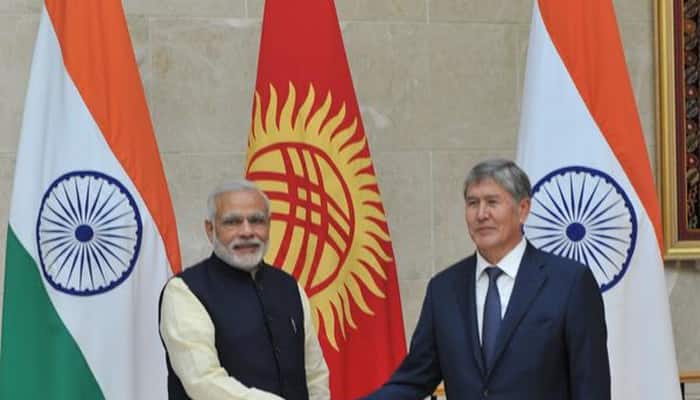 New Delhi: Prime Minister Narendra Modi, making his penultimate stop in Kyrgyzstan as part of his tour of Central Asian countries, said on Sunday that his visit demonstrated the importance that India attached to new level of relationship.

While voicing his concern over rising trend of extremism and terrorism worldwide, PM Modi also said that Kyrgyzstan was a key part in India's Central Asia vision.

"Kyrgystan`s commitment to the UN Peacekeeping Missions is truly laudable." Modi said Central Asia had an important place in India's future and both countries have a shared interest in combating extremism and terrorism.

The two sides inked four agreements, including defence cooperation a Memorandum of Mutual Understanding and Cooperation in the field of elections.

“We can reinforce each other`s economic progress. We can contribute to cooperation and integration across the different regions of Asia," he said.

Modi expressed happiness over the agreement between the two countries` election commissions, and said he looked forward to a parliamentary delegation from Kyrgyzstan visiting India.

Modi said both countries would hold a round table in Bishkek in the field of agriculture to explore possible avenues for cooperation and identify concrete projects.

He said the bilateral defence ties were strong.

"We have just completed a joint exercise... We have decided to hold joint military exercises on an annual basis", he stated.

PM Modi further said that new agreement on defence cooperation would provide a framework to broaden engagement and would include the defence technology.

He congratulated President Atambaev on Kyrgyzstan joining the Eurasian Economic Union and said both sides have agreed that a Free Trade Agreement between India and EEU would substantially increase cooperation.

The agreement on defence cooperation seeks to deepen cooperation in matters relating to security, military education and training, military exercises, and exchange of experience, military instructors and observers.

Both sides also inked a MoU on cooperation in the fields of standards and culture.

On the other hand, the Kyrgyz side expressed its appreciation to the Government of India for training Kyrgyz military officers for conducting various UN Peacekeeping courses, including by Centre for UN Peacekeeping in New Delhi, as well as for exchange of experience with Kyrgyz Armed Forces on the Level II UN Field Hospital of the General Staff of the Armed Forces of the Kyrgyz Republic.

Meanwhile, PM Modi also tweeted about his visit to Kyrgyzstan:

Glad to meet President Atambayev. His contribution to democracy & development is admirable. pic.twitter.com/BNGYxIHaZZ

With PM Sariyev. Our meeting was very positive & we are both optimistic about the ties between our nations. pic.twitter.com/DQcS3lAbng

Goodbye Kyrgyzstan. Thank you to the people of this wonderful nation for the extraordinary warmth. Our ties are all set to become stronger.

We should wait for more definitive official response from Pak: Uday Bhaskar